Today, we have a blast from the past - Kenny Chou, who wrote the music for the cult fighting game One Must Fall 2097, in which giant robots fight each other in battles to the mechanical death. To give some historical background: in the early 90s, Epic Games (then Epic MegaGames) focused on shareware arcade-style games - no Unreal, no big budgets. In 1994, Epic Games distributed One Must Fall 2097, a game made by only two people - Rob and Ryan Elam. The game had some unique features, such as extremely dangerous battle arenas and an upgrade system for the robots. One Must Fall 2097 was well received by players, and its soundtrack was certainly one of the reasons for the game's success. Michael: What prompted you to become a composer? Do you have a musical education? Did you play in bands when you were younger?

Kenny Chou: I’ve always had an interest in music as a kid. In elementary school, I would be the annoying kid who would constantly bang on the table to a song in his head. By the time middle school rolled around, I had an extensive collection of audio tapes and custom mixes of my favorite artists.

During middle school, we had a Commodore 64 in the house. Playing games on the C64, I eventually ran into my very first SID based chip-tune in a demo! I was blown away at how awesome it sounded, and wanted to know how to create my own. Unfortunately, I never found what was needed to create chip-tunes on a C64, but it started a little spark within me.

Roll forward to high-school, I purchased my very first PC (80286!) with an Adlib sound card. That was when I started playing with Adlib Visual Composer, a piano roll-style sequencer. I wrote a few songs on it, but they were more like random noises that sounded pleasing to me :) I had no formal musical training at this point, so I had to improvise using my favorite bands for inspiration. It was through Adlib Visual Composer that I learned how to differentiate some of the basic instruments used in popular music.

Soon after, I purchased a SoundBlaster card. A kid in school, whom I traded games with, gave me a copy of a shareware program called Scream Tracker. Scream Tracker is a 4-channel sample-based sequencer (tracker). From that point forward, I was hooked into learning about, and creating music.

As for formal musical training, I’ve spent two years in college as a music technology student. The time spent as a music student gave me insight into the theory behind music. I eventually dropped out of music as a major to pursue a career in information technology.

Michael: One Must Fall 2097 was a really awesome fighting game for its time and your soundtrack really adds to the game's atmosphere. Tell us, how did you get into this project? What materials did the guys from Epic MegaGames provide you with and how much time did it take you to finish your work?

Kenny Chou: That’s actually a funny story! I pretty much just called Tim Sweeney (CEO of Epic MegaGames) on his direct line, and asked him if he had any projects needing music. This was possible, because I wrote music for another game called Zone 66, which was distributed under Epic MegaGames. I think I asked my friend (who coded Zone 66) for Tim’s number, and he gave it to me. I would like to point out that I was just a kid, with no knowledge of business etiquette. I had a phone number, so I called it :)

Surprisingly, he ended up putting my name out there when Rob Elam (creator of the One Must Fall series) needed a musician for his game. Rob called me up, and things just took off from there. I believe I was given three months to complete the tracks, but don’t quote me on that. Rob sent me the backgrounds for each arena, and we would talk about what type of music would match the scenario. He was pretty lenient with his requirements, so I had the opportunity to focus more on what I wanted to write at the time.

Michael: What was it like to write game music in those days? Which instruments and software did you use?

Kenny Chou: At the time, I was using Multi Track Module tracker (.MTM format) to write the One Must Fall 2097 soundtrack, but I was limited to using 4-channels (mono) out of 32-channels. Once finished, the tracks were converted to the standard 4-channel .MOD format for One Must Fall 2097. The instruments were picked from my library of 8-bit samples collected over the years.

Michael: You were also involved in the demoscene as CCCatch. Tell us about your music from that time and maybe a bit about the demoscene itself. Did you work on any other projects?

Kenny Chou: The demoscene was a group of like-minded individuals who pushed technology to the limit, in the name of art. Most of the projects I worked on were linked to Renaissance, the demo group I was a member of. It was a very inspirational time for me, because I had a chance to meet some very talented people. I was driven to improve my music almost every day, as there was so much to learn from the other musicians. The only project I worked on outside of the demoscene was One Must Fall 2097. After that, college started and I found less and less time to create music (for one reason or another).

Michael: In 2003, there was a sequel to One Must Fall 2097 called One Must Fall: Battlegrounds. How did you like working on the first instalment and did you consider writing the soundtrack for the sequel as well?

Kenny Chou: If Rob Elam had contacted me to write the soundtrack for One Must Fall: Battlegrounds, I would’ve taken the offer. Unfortunately for me, they had Saul Bottcher as their in-house musician for their new studio, so I was out of the picture.

Michael: How much of your life is dedicated to music at the moment? Have you ever considered releasing a solo album? If you are not involved in music, tell us what you are up to now.

Kenny Chou: I would say music is one of my primary hobbies today… that, and being an avid gamer ;) I always had this dream of making a solo album, but I will need a lot more dedication to make that happen. Perhaps one day, when I have a story to tell in the form of music. My career choice for the last 12 years has been in IT. Overall, I’m doing pretty well with my life. Good friends, family, job and succeeding in the pursuit of happiness. 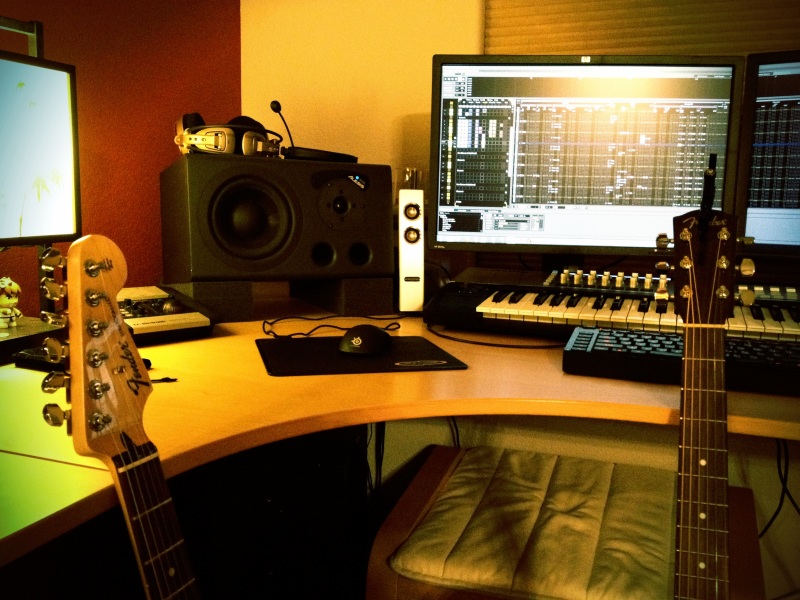 Michael: Which musicians have had a strong influence on you? Who would you like to work with in the future?

Kenny Chou: My earliest (and longest) musical influence was Depeche Mode, but they are just one band out of many (and more to come!). These days, I want to explore indie pop, dub-step and the electro-house genre. Sometimes I enjoy learning the techniques as much as the music itself. That’s probably the IT side of me talking :) When it comes to music, I mainly prefer to work solo. However, I wouldn’t mind meeting other hobbyists to share notes and learn from one another. It’s about the journey, after all.

Michael: What do you tend to do in your spare time? Do you like to travel? Have you ever been to Europe and if so, what are your impressions?

Kenny Chou: Half of my free time is spent playing online games with friends, or working on music-related material. The other half is spent trying to maintain a normal social life ;) I travel, but mainly to closer destinations around me (eg. other states, or outlying cities). The only country in Europe I’ve been to is England. I have family there, so I go there once in a blue moon. Although my travels to Europe are quite limited, I really like the historic feel of London, if that’s worth anything. I would like to eventually visit the Netherlands and Finland one day.

Michael: What has been the funniest moment in your music career?

Kenny Chou: Every time I sit down, prepared to write the next big hit, but end up turning the filter cutoff knob for two hours straight. Ok, that didn’t really happen… or did it?

Michael: Finally, can you give any advice to musicians who are just starting out?

Kenny Chou: Use your canvas like a visual artist uses theirs. Start with a simple sketch of the music, and then slowly layer in the details. Get as close to what you hear inside, and onto that musical canvas. Focus on the music first and foremost, before worrying about the mix or the mastering. Take my suggestion with a grain of salt, but it works for me :)