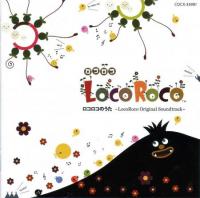 The LocoRoco Original Soundtrack is simply one of the most creative and pleasurable game soundtracks to ever exist. Some even compare it to Katamari Damacy's soundtrack, which is comparable in a sense because of certain elements they share such as children singing and zany arrangements. Comparable or not, the LocoRoco soundtrack is, no doubt, completely unique in its own way. Nobuyuki Shimizu and Kemmei Adachi, who are pretty new to the mainstream video game music crowd, composed the soundtrack. They not only composed the music but also performed most of the instrumentals. The soundtrack may not be for everybody, but most will at least be able to appreciate what went into it.

The first thing you absolutely need to know about this soundtrack is that it's sung in a completely fictional language, which is appropriately called "LocoRoco Language". This is no Sims gibberish, but rather a full-fledged language that sounds just amazing when sung. The album consists of several different singers who each represent a color of LocoRoco from the game. The "Mui Mui" sing any tracks that the LocoRoco don't sing with their helium filled voices. Most music sung by the LocoRoco is excellent while Mui Mui music tends to get annoying, though I understand how it plays a large part in the game. The majority of music is worth listening to, though some tracks really stand out above the others, specifically the core character theme tracks.

Let's get the bad out of the way first. When said "bad", I didn't mean there were bad tracks on the album, but rather that some still come with their flaws or don't work as well out of the game. To clarify what I mentioned earlier, a lot of tracks that aren't "themes" are either shorter, more annoying, and/or lesser of compositional value. This album is one those albums that would have been better off just picking the ten best tracks. I couldn't imagine listening to many songs like "Chuppa Chuppa", for example, outside of the game. It's obviously performed badly on purpose, which can have its charm but not in this specific song. The "kazoo" just puts it over the top and it's an example of a track that isn't very fun to listen to outside of the game.

That said, a couple of the non-theme tracks are admittably fun to listen to on their own like "The Eaten Song" or "My Friend, Nyokki". If you can tolerate the chipmunk voices then definitely try "The Eaten Song". It has a fun "shoo-be-doo" oldies feel to it, which I personally liked, and I'll admit that the high voices are fun here. A couple of Mui Mui songs have this feel and the genre is a nice contrast to the LocoRoco songs. "My Friend, Nyokki" has a sort of carefree afternoon feel to it. It's one of the few non-lyrical pieces on the album. It involves lots of whistling and clapping which is a fun touch, though it definitely gets repetitive. All of the music really works great for in-game music, though.

The real bulk of the album starts with the "LocoRoco Song", which you'll hear six times through out this album. Each time a different LocoRoco sings it, and it's fun to see how they treat the song. The upbeat march-like composition stays the same for this theme throughout the album though. It's an especially fun and original melody and very much an opening piece. Yellow's child voice complements the song best because it fits with the "cute march" feel. It's still fun to hear the others sing it, but their voices just don't match the style.

Every actual character theme track is just as good as the next. They all have their own a capella themes preceding them, which are fun though the actual themes are where you'll find the real meat. The first one is "LocoRoco Yellow's Theme". The Yellow LocoRoco's theme is a basic catchy rock song and I say this in a good way. Its minimalistic chord structure works nicely with the children voices. This chord structure definitely allowed the song to be extremely clean and polished. If you've ever found yourself liking cute upbeat music then the Yellow songs are for you.

The next character theme is the Pink LocoRoco's theme, which is extremely French sounding from the accent to the accordion. This is the only taste of female voice in this game and I would have liked to hear more of a variety of voices. No one said that LocoRoco needed to be pink to be female. Her theme is a very smooth and flowing song and the French accent just adds to that. Contrasting this theme is the Blue LocoRoco's theme, who has more of a baritone voice. The singer sings has a very warm voice and the theme reminds me of a grand stroll through a starry night. The humor in the Red LocoRoco's voice is very addicting. The Red Theme has an extremely strong reggae feel to it and the singer rolls his "r"s like none other. Whether you like reggae or not, you'll probably find your self listening to this theme a couple times just to hear the Red LocoRoco sing.

The Black LocoRoco also has a fun voice that is very similar to that of jazz trumpeter/singer, Louis Armstrong. Black's Theme itself has an outright "funky" feel to it, which is entertaining, but probably my least favorite when it comes to themes. If you like "funky' music, then don't worry because they definitely nailed the style and the lyrics are very fun. The final character theme, "LocoRoco Green's Theme", is arguably one of the better themes in that it doesn't lose its novelty as quickly. Green has kind of an Italian/Spanish accent which involves a very beautiful sounding "r" sound compared to Red's whose "r"s are just fun. The song starts with just a Spanish guitar, but soon crescendos into a full-blown rock song and that crescendo is definitely the best part of the song. The pop rock part of the song is reminiscent of Yellow's theme, but sounds new and refreshing with the new voice and melody.

Finally we come the grand finale piece, "Ending Theme". This piece is a pure celebration of all the styles on the album blended together beautifully. You get to hear every LocoRoco singing together and each getting their own little featurettes. The track is extremely well arranged with incredible attention to detail. It's a medley and a composition in its own right at the same time. In the first part, you'll hear the yellow LocoRoco singing a very fun tune while the green one backs him up and then new colors in each phrase. All colors sing together during each chorus and it's just plain fun. This piece actually has themes a little too similar to the famous party song "Mambo No. 5", which is not much of a problem, though it takes away some of the originality. There's a bit of talking during the song and it gives it the feel of being from a musical, which is not necessarily a good or bad thing. In fact, this whole album has a remote feeling of being from a musical.

The LocoRoco Original Soundtrack is not only fun and creative, but it has some truly amazing composing done by new mainstream composer Nobuyuki Shimizu. I swear I'm not just falling for the cute singing! These songs may not have a specific genre but they have their own consistent LocoRoco genre to paste it all together. The music truly goes hand in hand with the in-game personalities, but at least a lot of the music remains great out of the game and certainly will get stuck in your head. If there were more theme style songs and less in-game filler then this would definitely be one of the best original game soundtracks to ever exist.