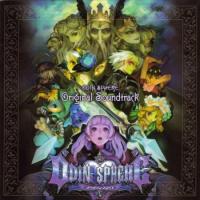 Vanillaware's 2007 action RPG Odin Sphere was acclaimed for its multi-scenario fairy tale storyline and beautiful 2D fantasy artwork, but less so for its monotonous gameplay. Its soundtrack was created by Hitoshi Sakimoto's music production company Basiscape during the same period they worked on the disappointing Grim Grimoire soundtrack. The Odin Sphere Original Soundtrack is a much more fleshed out and focused effort than its little cousin; the 45 tracks present provide a diverse accompaniment to the battle scenes and embellish certain storyline scenes. Unfortunately, the tracks intended to define the soundtrack — the major themes composed by Hitoshi Sakimoto to open and close the game — are sloppy and generic efforts. Nevertheless, its centre features many wonderful themes from secondary Basiscape members sufficient to redeem the soundtrack for persistent listeners.

Hitoshi Sakimoto opens the soundtrack with a vocal theme sung in French. Norihiko Kawahara sings a mystical melody characterised by beautiful rises and falls in pitch and volume. Though the vocals are mild-mannered throughout, the fantastical accompaniment becomes increasingly elaborate, developing from a simple piano and chimes introduction to a grand full orchestral accompaniment. Overall, the main theme is striking, maturely styled, and as colourful as the game itself. Unfortunately, it does not satisfy in its subsequent renditions, partly because the melody itself is a little weak, but mainly because of derivative arrangements. "Opening Title" features rather soothing soprano and piano work, but lacks any of the individuality or development needed to give the soundtrack a sense of direction. "World Map" and "The Fated Path" are both lifeless assemblies of synth vocals and suspended strings given an ethereal glaze through excess reverb. Worse still, "A Fated Accepted" is a sickeningly clichéd strings arrangement that uses the melody only as a way to hide lack of inspiration in all other respects. Despite its potential, the main theme is mainly used as an excuse for laziness rather than a way to enhance the emotion and profundity of the soundtrack.

The majority of Disc One features dark and bombastic battle themes. Masaharu Iwata's first entry "Battle in the Land of the Dead" instantly captivates with brisk gliding string lines, furious percussion, and moody brass chords. "Battle on the Snowy Mountain" is an action-packed militaristic anthem that fits the gameplay at Winterhorn Ridge, whereas "Battle in the Land of the Devil" is full of the malice of dirty brass and anger of heavy snares. Each battle theme is also given a slower and quieter second interpretation. In "Battle in the Land of the Dead ~ Second", a xylophone provides a slow-paced high-pitched interpretation of the string melody in combination with plodding descending piano notes; tension remains with the intermittant clarinet melodies in the chalumeau register and exceptionally menacing build-ups in the accompaniment. Despite taking a while to attract attention, the brooding tension and magnificent climaxes of these second interpretations make them fascinating listens. An interesting exception is "Battle in the Forest of the Witch ~ Second"; it adopts the form of a lush waltz, greatly elaborating on some of the whimsical characteristics of the first interpretation. Put simply, these are some of Iwata's most refined and expressive works in a long time.

Kimihiro Abe achieves a remarkable compositional debut with the Bernstein-inspired "Battle in the Land of the Fairies". The composition revolves around an bold and dissonant seven note motif presented on brass, but Abe sustains interest well by varying the complex metre, creating rhythmical impetus with dazzling snare drums, and extensively elaborating on the motif during the development section. In a guest role, Manabu Namiki interprets the track with an eccentric and minimalistic arrangement that obsessively revolves around an oboe motif. Abe maintains his love of rich modernist timbres and furious unsynchronised rhythms with the equally fantastic "The Ruined Landscape of Nations at War" and "Battle in the Labyrinth City". Mitsuhiro Kaneda provides new perspective on these themes with stylistically accomplished arrangements. He offers softer perspective on the themes by using the piano, acoustic guitar, various woodwinds, and percussion in an artistic way. His meticulous and novel methods of layering these forces and developing musical ideas creates transient soundscapes suitable to represent the dynamic development of a fantasy. Kaneda and Abe clearly demonstrate their capacity to bring utterly unique musicality to the already diverse realms of game music here.

Following all these battle themes, there are plenty of other compositions to colour the game. Iwata offers some of the most emotional moments on the soundtrack by exploring the complex emotions of war. He cinematically develops haunting soundscapes on the elegaic "The One Left Standing at the World's End" and especially personal "Sinking in Sadness". He maintains similar intensity while expressing different moods on the commanding anthem "Valkyrie March" and the relieved arrangement "The Hero's Return", which inspires particularly evocative imagery. Not everything is serious, however. On "Tutorial", Iwata provides a whimsical harpsichord-led theme that sustains interest well despite its intrinsic simplicity. Better still, Abe demonstrates his versatility with a frolicsome dance with "The Mysterious Pooka Village"; not even considering its musical intricacies, this track is amazing for the way it stimulates all one's senses while inspiring the body to relax. Abe also produces the slow soothing waltz "A Quiet Investigation", which is surprisingly traditional in its classically-oriented musicality but still clearly within the realms of fantasy. But relaxation can only be momentary on this score and, with the intentionally sparse construction of "A Sign of Rebellion", he quickly inspires fear and unrest once more.

With Hitoshi Sakimoto's other contributions, it's very clear he dedicated much less time on this soundtrack than his co-workers due to his numerous other commitments. "Attic Library" captures the feel of reading fantasy books in a dusty attic, but is very irritating on a stand-alone level due to persistent use of a screechy and dissonant Eb clarinet motif. The related "Study Theme", in contrast, suffers from such clumsy harpsichord writing that the contemplative development sections feel contrived. Moving on to his successful tracks, "Battle in the Land of Fire" modifies the industrial rock approach Sakimoto took on the Hyper Street Fighter II Remix Tracks to achieve percussive furore on the battlefield. "Trial" is a very successful variation on Final Fantasy XII's major boss battle theme approach featuring plenty of bombastic brass and percussion. Despite a directionless introduction, "Restaurant" is another successful Final Fantasy XII imitation reminiscent of the gaiety of "Nalbina Fortress Town Ward". Despite its crucial position towards the culmination of the soundtrack, "The Prince of Darkness" is somewhat disappointing; it does not exert the same amount of malice as the Land of the Devil and Land of Fire battle themes given it exerts too much focus on repeating the same rather predictable motifs.

Moving to the climax, Kaneda's "A Hard Fight and then Hope" creates heaps of tension by urgently layering crisis motifs in an unconventional manner. "Rally" is a shimmering action theme that flawlessly blends abstract percussive and atonal elements with melodic fragments and hints of the main theme. As for the final battle themes, "Rise to Action and Invasion" regularly diverts from its driving elements to enter more fluid but still incredibly intense sections; one can only imagine how invigorating it would be to conduct a live performance of this theme. Abe's "Facing the Darkness" is an exceptional final battle anthem sharing characteristics of previous action themes yet projecting an even more epic feel. Nami Uehara arranges "Odin Sphere's Theme" for the band Shanachie to conclude the game. It opens with a new age take on the theme featuring Norihiko Kawahara's expressive vocals against ethereal synth and eventually piano. It subsequent moves into a low-key Celtic arrangement characterised by expressive fiddle and recorder performance. The Eminence Symphony Orchestra subsequently offer two bonus arrangements for small ensemble. Whereas "Odin Sphere's Theme" is a reasonable low-key piano and strings arrangement, the minimalistic take on "Attic Archive" irritates with its pizzicato strings and solo violin interpretations of the clarinet motif and main melody of the original.

The Odin Sphere Original Soundtrack features some of the most unconventional and sophisticated orchestral compositions featured on a video game. Masaharu Iwata, Mitsuhiro Kaneda, and Kimihiro Abe contribute complex and refined compositions shining with character, emotion, and individuality. Unfortunately, the contributions of its Hitoshi Sakimoto is limited to past imitations and poor main theme arrangements meaning that the score lacks thematic cohesion and takes some time to establish a dramatic arch. It is ironic and disappointing that the valuable contributions by secondary Basiscape members are tarnished by its overworked leader. However, the score is still a fantastic experience thanks to an impressive centre featuring dark expansive action pieces, various emotional interludes, and a fantasy aura. If you can cope with the overall intensity and don't mind skipping the handful of shallow works, this score comes highly recommended.