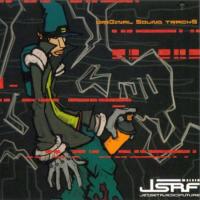 Jet Set Radio Future's score is just as inspired as the original. It definitely has more variety in the artists whose songs are in its selection. Hideki Naganuma returns to compose the majority of the tracks. His pieces include both original works and remixes of his works from the first Dreamcast game, all handled by different remixers. Other bands and musicians include Russell Simins, Cibo Matto, the Prunes, and Scapegoat Wax — quite an eclectic collection and fitting for this unique game. That said, not all the additions made it to the soundtrack release or the promotional album. This review will focus more on the game score as a whole rather than the album offerings.

I first played the game in 2004, and the title theme, "The Concept of Love", immediately struck a chord with me. Love is an ideal example of how music does not need to be complicated to be memorable. Love consists of little more than "understand, understand, understand... the concept of love," repeated for a good duration of the song. It is pretty remarkable that such repetitive lyrics are not only able to prevent the song from being repetitive, but they actually work in the song's favor to give it real oomph and presence. It grabs you from the first beat and never lets go!

My favorite piece is "Birthday Cake". This piece by the J-pop group Cibo Matto (Italian for Sweet Food) was first released on their 2nd album Viva La Woman! This piece is one of the most unique pieces of music that I’ve ever heard, it is unrivaled its strangeness and its presence among pop songs. The best way to show my praise for it is to recall a story: I had heard of this song well before I first played Future but wanted to hear it in-game to be able to get the intended experience. This track isn't featured on the main soundtrack, but makes it to the Jet Set Radio Future Music Sampler released with some copies of the game nonetheless.

The song is first played in 99th Street, the domain of Rapid99, a city quite similar to Benten-Cho but with much greater height design in mind. Just think of the giant dragon statue in the town square to get a sense of Future's massive levels when compared to the first game. The song plays as the 2nd or 3rd choice in the level, and its presence is immediately felt with a screeching voice shouting "Shut up and eat, too bad, now bon appétit!" over and over again. The repetition hurts the track initially, as it is far too shrill to employ such repeated lyrics. As the song goes on, the catchy lyrics turn it completely around in the listener's mind, as its oddity now works in favor of the song rather than against it. By the end of the song, I couldn't help but want to hear it again and again.

I also have several amusing stories about Birthday Cake. A fellow reviewer on GameFAQs mentioned how when he first heard this song, he wanted to cry, as it was so shrill and unpleasant. But the upbeat theme and crazy lyrics ("Yes, I'm cooking for my son and his wife, it's his 30th birthday") gradually caught on, and it is now one of his favorites. This is quite similar to how I first dealt with the song; I didn't dislike it, but it definitely grew on me. I often play this song to people looking for different types of music, and promise that regardless of whether they like it or not, they will definitely remember it! I've done this for three people, including a recent girlfriend, and the reactions have been right on the money!

The last story is how I played it for a fan of J-pop and his reaction was fairly muted, thinking he didn't care for the song. But within 2 hours, he was messaging me asking for a copy of the song rather frantically ("I WANT my Birthday Cake!" where his exact words!) Very amusing, and a clear testament to the power of this great song! I think GamePro best described it in their review on this game, noting that there is nothing quite like grinding up and on telephone poles throughout the neon nightlife of 99th Street while "Birthday Cake" blasts through your speakers. I'd have to agree. Well, that well on for a bit longer than expected, but no matter. Moving on.

Other highlights include "Funky Dealer" by Naganuma. It has great lyrics and an even catchier beat than "The Concept of Love", if that's possible ("I want a winner, get a hot hand!") This song isn't my favorite, but probably the one I listen to most. I also favor BIS' Statement of Intent, a track also very catchy despite its repetition. It is funny how repetition is almost also repugnant to me in hip-hop and rap, yet it works really well in other types of music. I guess it is all about the music's presence and feeling that it evokes, especially if it is not meant just to shock and offend.

I am not sure if Future has more excellent tracks than the original, but it certainly has more than are average to just plain bad. While I appreciate the extensive presence of the Latch Brothers, showing their support for the game, most of these tracks are just not very good. "The Latch Brother Bounce" is probably the best, but "Ill Victory Beat" is just bad and almost unpleasant to listen to — that song is the 50 Cent of Jet Set Radio Future! The Latch Brothers' other songs fare better, such as "Koto Stomp", but even these are only good for in-game listening. I have them mostly for completion sake and occasional curiosity.

An interesting thing is that they also serve as the RB or remixer, on tracks such as "Rockin' the Mix" and "The Answer". In these tracks, their presence is much more apparent. If the group had been more than a side project, I would have told them to quit writing and move on to remixing, as this is where their talent was most apparent. Note that most of the Latch Brothers tracks are limited to the Jet Set Radio Future Music Sampler. Another highlight of the albums is the presence of Jet Set Radio's musical alumni, like Guitar Vader and Richard Jacques. Their new songs fit right in and are actually better than their offerings in the original.

In summation, Jet Set Radio Future is more varied than the original, with less emphasis on J-pop and more on hip-hop and other genres. This works mostly to its benefit as a sampling of these genres, a great tool for those that may be unfamiliar with these types of music. Finally, a word of caution. Both the Jet Set Radio Future and Jet Set Radio Future Music Sampler have limited track selections from the game and many are missing. The official soundtrack doesn't even include the awesome Birthday Cake. Even by owning both, it's not possible to officially listen to all the songs. The final score reflects the selection offered by the official soundtrack.

Billy Brown (20)
Album was composed by Guitar Vader / Хидэки Наганума / Ричард Жак and was released on March 20, 2002. Soundtrack consists of tracks with duration over more than hour. Album was released by Scitron Digital Content.