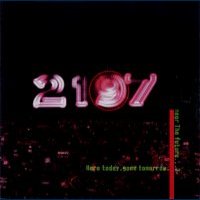 1999 was a great time for Japanese game music. The PlayStation era was well-established, Square had produced a series of phenomenal RPG soundtracks, and major composers were starting to go freelance for the first time. It was the right time for the Troubadour label to get together a phenomenal group of artists for one last time. With the turn of the millenium also due, it was also an appropriate time to consider the future. The album's inspiration Shinji Hosoe went quite a bit further than 2000, though, and instead postulated what the world might be like in 2197. A team of 12 artists joined the project to create music to explore the vibrant urban world conceived...

Yasunori Mitsuda offers a memorable introduction to the album with "Blue Sonnet". The first 30 seconds recite Mario Cuomo's commanding speech for Bill Clinton's presidential nomination in conjunction with distinctive warped synth effects. The rest of the composition effectively depicts a multicultural urban society with an imaginative blend of jazzy piano rhythms, hip-hop beats, ambient synth pads, and voice samples. Some of the synth samples used are a little superficial, but it's still rhythmical and timbral bliss. Ayako Saso's work is surprisingly old-school in flavour with rich synthy melodies and rocked-up accompaniment reminiscent of her work on Galaxian 3. That said, the progressive improvisations and excellent implementation by Akira Yamaoaka ensure it still fits Hosoe's more mature futuristic vision. Either way, it's still a great listen.

Hitoshi Sakimoto's "Haemoglobin 40.2" is one of the tracks that most fits the concept. The timbres will be a little unfamiliar to casual Sakimoto fans, part beat-heavy electronica like his early shooter works and part ambient soundscaping like Breath of Fire V's "Electric Power Building". Nonetheless, the idiosyncratic choir use and gorgeous flute solos from the 1:45 mark create a warm, almost heavenly, feel to the track. Perhaps Hosoe's world is a utopia after all? Eh, not if Hayato Matsuo has his way. "Old Pork" is one of the most beautiful tracks on the soundtrack, but also one of the darkest too. After a piano introduction, Matsuo offers an incredibly potent mixture of elegaic vocals, aggressive voice samples, industrial beats, and meaty funk influences. The vocal solo from the 2:55 is simply gorgeous, but also especially haunting too. Could this be the emotional pinnacle of the album?

Going deeper into the album, there is a lot more stylistic variety to be explored. Akira Takemoto's "Gundrops" is a fresh homage to trip-hop artists like Portishead. After years of dodgy vocals on Troubadour releases, the female vocals here are spot on for portraying a surreal world. The electronic tracks are also elegantly assembled and once again showcase the talents of manipulator Akira Yamaoka. Shinji Hosoe's first composition "Degenerated Evolution" is a subtle and expansive techno composition that explores the various colours and moods of 2197's world. Masaharu Iwata keeps up the excellence with "Tide Graph", a relatively minimalistic composition characterised by a divine synth melody during the slow-developing primary section and a two part synth invention during the decorative second section.

Yasuyuki Suzuki's "O_gnad Memorial" is another work that seems to reflect a multifaceted world. The semi-acoustic guitar use seems more reflective than futuristic, but the rest of the composition is spot on with its experimental beats and soundscapes. Takayuki Aihara is another artist known for artistically assembling a lot of elements into one track and "The Mars Mystery" is no exception. So much mood is created by the ethereal synth pads, jazzy piano clusters, and electronic downbeats. However, the composition ends up being far more expansive than that, with light tropical-flavoured moments, percussive industrial parts, and celestial choral sections too. Seiichi Hamada's "City_2197" is characterised by a blend of simple trumpet melodies and light funk beats. It's another track that's not exactly forward-thinking or futuristic, but who cares? It's catchy and fun to stroll to!

As the album approaches its conclusion, Miki Higashino makes the highbrow contribution "Future is Now". The introduction keeps the fantasy alive with dreamy female vocals singing French lyrics, though soon becomes nightmarish... Much of the rest of the composition features intense drum 'n bass beats boostered by aggressive orch hits, foreboding bass lines, and vocorder use. Taihei Sato continues to explore whether the future world is going to be a welcome one. The first part of the composition is hostile with its distorted take on bebop whereas the rest of the composition is dedicated to beautiful piano-led smooth jazz. It still doesn't sound 'right' due to Yamaoka's distortions, but it definitely expresses more humanity. Hosoe returns to lead the album out on a surprising romantic note with "Taraber's Wedding". With a blend of piano and synthesizers reminiscent of Chariots of Fire, Hosoe declares that there will still be love in the world as long as humans are still around.

2197 is the most iconic Troubadour release and for good reason. The concept of the album is very interesting and explored in imaginative and evocative ways by each person involved. There are great production values from start to finish thanks to Shinji Hosoe's direction, Akira Yamaoka's manipulation, and each composer's meticulousness. Each composer was well chosen and there are a lot of famous and very talented names involved. Together they offer a broad stylistic spectrum with jazz, retro, funk, hip-hop, trip-hop, and cinematic elements all appearing within an atmospheric electronic framework. Even better, this album is widely available at VGM World for a cheap price, so is well worth picking up.

Album was composed by and was released on April 18, 1999. Soundtrack consists of tracks with duration over about 60 minutes. Album was released by Troubadour Records.