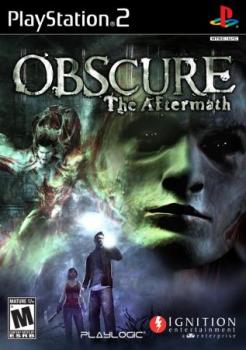 On Obscure: The Aftermath, Olivier Deriviere returned to his role as music composer to portray minds trapped in the abode of insanity. He enhanced the soundtrack from the original game by introducing the Boston Quartet and contemporary elements alongside the returning choir. Once again, Deriviere released the soundtrack for free digitally and offers a pleasing overall experience.

The soundtrack begins with the particularly outstanding entry "Corruption with Rage and Melancholy". The track also acts as the main theme for the game and many variations of it can be heard in the other tracks. The best part is definitely the last section, when the theme is exposed in all its beauty. It is particularly powerful in the game when the game's protagonists, Shannon and Stan, exchange a kiss in a memorable scene. The track also receives a romantic string-based arrangement in "Lost Loves" to reflect the tragedy that faces these characters.

Despite the outward romanticism, the soundtrack definitely follows the game's core theme with its psychological horror focus. "Periculum", for instance, portrays danger once again with its a capella soprano solo and elegant Latin lyrics. The vocals also steal the spotlight on "Hearing Fearies", interjecting seemingly sporadically amidst the eerie synth sounds. "Save my Soul" meanwhile serves as the secondary main theme in the game and is heard while saving one's progresses. The high-pitched violin reflects on the dire situation, but also gives some hope with its occasionally comforting moments.

An interesting new feature in this soundtrack is its use of electronic instruments, ranging from bass and guitar to electronic beats. "Waltz of Death" and "Ballets of the Dead" are a unique fusion of contemporary elements and romantic dancelike qualities. Thankfully, Deriviere still manages to maintain an artistic focus and achieves the desired effect within the game. "Bad Behavior" is a particularly iconic track; the electric guitar and drum kit are raw and exciting, while the vocals are highly memorable. It is especially effective in the climax of the game while fighting the last boss.

Deriviere offers a more diverse soundtrack for Obscure: The Aftermath, particularly with the introduction of some adrenaline-pumping action themes. The result will certainly have more mainstream appeal than its predecessor, though there are plenty of more artistic tracks too. Note that this soundtrack does not include the exclusive tracks featured in the PSP version of the game, most notably "Rage Against Tears", though the final offerings are still very satisfying, especially for a free download.

Soundtrack available for free download from composer website (www.olivierderiviere.com)
Album was composed by Оливье Деривьер and was released on March 25, 2008. Soundtrack consists of tracks with duration over about 50 minutes.