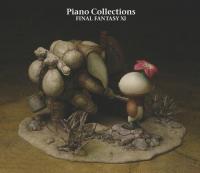 One of the bonuses of 2007's Final Fantasy XI Original Soundtrack Premium Box was a Piano Collection album and sheet music book. Just a year later, a stand-alone Final Fantasy XI Piano Collections was announced. After pessimistic asumptions that it would simply be a reprint of the box set collections with a few bonus tracks, it turned out to be a completely new album featuring 11 arrangements. The track listings included a few classics that weren't in the Final Fantasy XI Premium Box Piano Collections such as "Ronfaure", "The Grand Duchy of Jeuno", and "The Sanctuary of Zi'Tah" and also placed emphasis on music from the new extension Final Fantasy XI Wings of the Goddess. Reuniting the same team as the previous album, it was produced by Naoshi Mizuta, arranged by Kaoru Ishikawa, and performed by Ayumi Iga and Kasumi Oga. Were the results similar?

The minimally arranged "A New Horizon - Tavnazian Archipelago" translates to piano extremely well given the pianistic shape of the original melodies and harmonies. The extensive development of the original meant few elaborations were needed, though the nuances of Kasumi Oga's performance and occasional decorations in Ishikawa's arrangement ensures an emotionally fulfilling listen. Taking a similar approach on "The Sanctuary of Zi'Tah", the arranger emphasises that it was principally Mizuta's subtle melodic shaping and ostinato usage — not the woodwind and guitar instrumentation — that soothed and enlightened in the original. Interest is maintained during the development with the addition of a third voice at 3:40 to reinforce to the imagery of the radiant forest. In "The Grand Duchy of Jeuno", Ishikawa initially offers a straightforward classically-oriented piano reduction. The pleasant phrasing of the performance and depth of the development section ensures an attractive listen.

Moving on to the emotional gems of the CD, Ishikawa convincingly arranges a harp solo for piano with "Whispers of the Gods". Built with subdued melodies, rolled chords, and gently layered additional parts, it is the most quiet and subtle interpretation on the CD. Unfortunately, there are audible background noises from the recording session throughout; though similar problems are apparent in other arrangements, they are not as prominent or distracting. The first Wings of the Goddess arrangement, "Stargazing", represents the nation of Windurst in past time. Focusing on mournful jazz-tinged motifs to inspire imagery of an uncertain dusk, it couldn't be more of a contrast to "The Federation of Windurst", the upbeat opener to the Premium Box Piano Collections. Another highlight is the fluid and heartfelt performance of the arrangement of Nobuo Uematsu's "Ronfaure". Its 6:08 playtime is a consequence of the incorporation of all three sections of the original piece rather than use of new material.

The low point of the CD comes with the two duet arrangements of the action themes at the centre of the CD. The duet performances on the Final Fantasy XI Premium Box Piano Collections, while novel in concept, suffered from uninspiring harmonies and unpianistic textures. "Fated Strife -Besieged-" is an even worse arrangement than its cousins and overwhelms listeners with obnoxiously articulated crisis motifs and muddy repetitive chords. It briefly develops to achieve a rousing climax, but soon returns to its static origins before the arranger seemingly gives up and abruptly ends the abomination. "Mercenaries' Delight" is unlikely to bring delight when placed so soon after. It is relatively enjoyable because of the increased movement and stronger melody of the original material. However, the piano writing is very unbalanced meaning the brilliant treble flashes are drowned out by the endless bass thuds. It'd be very difficult finding people willing to play such clumsy duets together.

The CD closes with three more tracks from Wings of the Goddess. "The Cosmic Wheel" for Sarutabaruta's past time inspires nostalgia with a fluid combination of wailing melodies and arpeggiated accompaniment. It takes listeners on a very moving journey by gradually intensifying yet incorporating several gentle interludes. "Griffons Never Die" feels almost continuous with its wistful mood, but also creates a lot of tension, especially with the incorporation of a descending staccato motif at 1:33. The performance ends with some heavy piano chords, but they do not feel appropriate or pianistic despite the clear intention to create an engrossing climax to the CD. Given its final chord is needlessly extended for 30 seconds, the subsequent "Wings of the Goddess" feels more like a bonus track. Despite the warm melody, the piano interpretation of this Vana'diel march isn't very convincing; for example, the addition of some chromatic chord progressions creates some out-of-place dissonance on the album and much of the rest of the piece focuses on jagged harmonic figures like the battle theme arrangements.

The arranger and performers of the Final Fantasy XI Piano Collections interpret a strong selection of Final Fantasy XI music in a largely pianistic manner. However, pieces such as "A New Horizon - Tavnazian Archipelago", "Ronfaure", and "The Grand Duchy of Jeuno" are essentially carried by their original material, while "Fated Strife -Besieged-", "Mercenaries' Delight", and "Wings of the Goddess" are far less enjoyable due to harsh harmonies and sloppy writing. The album lacks the consistency and originality of the Final Fantasy XI Premium Box Piano Collections, partly because it attempted to take too similar an approach. However, the album will still be enjoyed by Final Fantasy XI enthusiasts and some beginner to intermediate piano players may even enjoy performing items on the sheet music book. I'd only recommend buying this album above the Final Fantasy XI Premium Box Piano Collections if you're not interested in the other material of the box set. It may be worth buying both albums, but it's a very large investment.

11. Wings of the Goddess
Music: Naoshi Mizuta / Piano: Ayumi Iga
Album was composed by Наоси Мидзута / Нобуо Уэмацу and was released on June 25, 2008. Soundtrack consists of tracks with duration over about 45 minutes. Album was released by Square Enix.