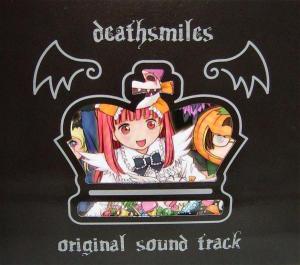 Cave, infamous for their famous manic bullet shooters, has struck gold again with a Halloween themed shooter called Death Smiles. Composed by Manabu Namiki, who many call the "king of shooters," it offers a side not often seen in Cave shooters. In their most rocking effort since Ibara, Namiki creates a very different score than many of his electronica focused soundtracks. Is this a new side of Namiki? Does his branching out into a style not often heard from him become a detriment to the overall soundtrack? Featuring live electric guitars by co-worker, Noriyuki Kamikura, Death Smiles is definitely a trip, but does it end in disaster? I'll focus on the stage and boss themes for the soundtrack, but note there are a couple of shorter tracks and a voice collection.

"Invitation to Another World" opens up the soundtrack with perhaps the catchiest character select screen yet to grace a Cave shooter. The overall tone is a electronica-based carnival theme with evil undertones. The theme for stage A-1, "Burning Halloween Town", is easily the piece with which I'm most familiar. As with much of this album, there is a heavy influence using gothic elements to create the soundscape for this piece. Ominous organ and synth leads, an electronica bass line with some awesome guitar riffs by Kamikura, and the occasional guitar melody really help to create my personal favorite first stage theme by Namiki. There is so much power behind this piece and it captures the essence of the game in ways one could only imagine. Complete with wolf howling sound effects, "Gravekeeper's Anger" is stylistically similar to "Burning Halloween Town". Unlike that piece, however, the approach definitely takes a more rock-oriented focus. Similarly between the two pieces, Kamikura provides some excellent bass riffs to accompany catchy organ and synth melodies. In addition, the electric guitar provides an excellent solo, complete with synthesized choral accents, to add that extra bit of power to the entire piece. Ultimately catchy, and easily on par with the rest of the rock-based stage themes on the soundtrack, this is another piece that should not be missed.

Perhaps the single piece on this soundtrack that sounds like it doesn't belong in a shooter soundtrack, "Lost Forest" is brim full of textural highlights and excellent atmosphere. The piece itself has a very ethnic tone about it. The percussion is the highlight of this piece, helping to craft a theme that oozes with texture. In addition, the string and woodwind work give it a sense of mystery and suspense, while adding only more flavors to the overall atmosphere of the piece. Even after all that, the piano glisses in the background help to accentuate the aura of mystery of the piece. This piece really showcases Namiki's diversity as a composer. For the second half of the stage, "The Witch of the Bottomless Swamp" also starts off a that haunting woodwind introduction and there is definitely a major focus on the bass line once more. However, that is where the similarities really end. In what I find to be Kamikura's best contribution to the album, the guitar riffs in this piece just exude that raw feeling of power. Sure, the synth led melody provides that ever important aspect in directing the flow of the piece, but Kamikura's guitar riffs easily undermine that. Truly a showcase of awesome skill!

Of the boss themes, I find this "Trembling Mad with Hatred" to be the weaker of the two. Even though both rely on the same bass melody, the variation between the two really makes the difference. The majority of this piece is led by a throbbing electronica bass line with the majority of the melody being played by organ. In addition, some string accents can be heard at various times to the piece to give this more of an "orchestral" feel. Before the loop, a synth line can be heard that adds a bit of spookiness to the piece. The second boss theme on the soundtrack, "Banquet of Madness and Blood..." is truly one of the highlights of the album. Following the same sinister organ lead of its companion piece, there is little to differentiate initially between the two. However, Noriyuki Kamikura's work on electric guitar really makes this piece stand out. The raw power of the electric guitar line gives this piece some edge, while retaining the sinisterness and energy found in the first boss theme.

Moving to the C stage themes, focus of "Rebellion of the Lakeside Village" is definitely synth-based. However, Kamikura's electric guitar work, heard in spatterings throughout the piece, helps to add a bit of contrast to softer sounds heard in the composition. The guitar solo before the loop has that raw power heard in many of the tracks. Particularly of note is the melody itself. It's quite bubbly and the dramatic beginning with the arching synth and guitar riffs really helps to set off the tone of the piece. As with all the stage themes, this one is definitely another keeper and may appease the fans of Namiki electronica more so than the fans of Namiki rock. In its counterpart "Awakened Beast", Namiki adds a nice ethnic flavor to the electronica based composition with the use of some exotic male chanting. As with the prior piece, there is another electric guitar solo that just helps to contrast with the smoother sounds of the piece. More striking is his continual integration of key motifs heard in the coupling of stage themes. The introduction to this stage theme is actually an arranged version of the opening in "Rebellion of the Lakeside Village". It's a bit more dramatic and slower paced, but the power it exudes is tremendous.

"Crossing the Ravine..." starts off with a haunting bagpipe lead-in, but after that, this is the piece on the album that describes Namiki's usual style. There are some haunting xylophone-like additions throughout the piece, but for the most part, it's all electronica. Reminiscent of something from his DoDonPachi work, it focuses on a heavy electronica bass and some awesome synth melodies. Bubbly, yet ultimately haunting, it's an interesting take on the electronica piece and definitely provides the motivation to get through the stage! Moving to the climax of the soundtrack, "Hades Castle" is, hands-down, my favorite piece on the entire soundtrack. Everything about it — from the enthralling introduction featuring that ever successful combination of rock, organ, and choirs, to the overall flow and melody of the piece — is full of energy. In addition, the various phases heard within the piece itself make for a highly diverse listening experience. On one hand, you'll hear parts where electric guitar is the focus of the piece. In another, you'll hear intense organ leads. And, if by some freak of nature, you have a third hand, you could count the haunting chorals behind a piano lead as well. It's truly a spectacle to behold and a fantastic final stage theme. Kamikura proves even more that the guitar work heard on this soundtrack is absolutely crucial to the success of certain pieces, and although I don't really think it is necessary for a piece like this, without it, it wouldn't have been as intoxicating.

After hearing the previous piece, the final stage theme "Waltz for the Noble Ghosts" is a bit of an oddball on the soundtrack. It has an overall carnivalesque sound to it with a sinister overtone, dominated mainly by strings and percussion. It is fitting for the overall ideas present within the album and does keep with the coupling of motifs present in the stage themes. For a Halloween themed game, many would argue that "Hell's Emperor," taken from Bach's "Toccata and Fugue in D Minor," would be the perfect choice for a final battle theme. In ways, I agree, and in other ways, I disagree. For example, the piece itself is a bit clichéd in terms of overall usage in the horror genre. At the same time, I think that if this had received an arrangement more fitting to the overall flow of the soundtrack, it may have come off as more appropriate. I can only imagine what it would sound like if Namiki added some electric guitar and a pumping electronica bass line, in addition to the organ and choral arrangement of the original. It's a very beautiful piece, although the conversion of it to play during a game does sound rather straightforward with little creativity. It's quite enjoyable, and is one of my favorite Bach themes, but after going through the stage themes and boss themes, this does interrupt the flow just a bit.

"PERIOD" is the ending vocal theme to the game, and to be honest, it's quite good. It's in the form of a ballad led mainly by a beautiful piano and strings line. Perhaps my favorite part of the entire piece though is the rare appearance of what sounds like a saxophone. It adds a bit of a surprise to the piece as well. The most prominent feature in this entire song is easily the vocalist, Takayuki Hirose. His voice seems to fit the style of the piece perfectly, and is it just me, or does he sound a bit like Gackt? Even the style of the song sounds a bit like Gackt could have written it. Overall, it's a stunning piece and definitely worth a listen. Moving to the image song "Mad Symphony 'Death Smiles'",if you could take one piece from the entire album to sum up the entire style of the album, I would say that this would be the one I would choose. It has both the gothic elements as well as the rock influence. It's a peppy rock piece that features the spectacular voice of Natsuko Naitou, who contributes the voice of Rosa in the game itself. The fusion of the electric guitar, percussion, and organ make for a very complex piece that exudes energy. Extremely catchy, the song captures the essence of the album with this bubbly interpretation of gothic rock.

Rarely does a soundtrack come along that gets my blood pumping as much as Death Smiles. Even rarer is the fact that this is the second soundtrack in 2008 that impresses me to no end. Every composition on here adds to the overall feeling of Halloween. From the carnivalesque music featured in "Invitation to Another World," to the heavy gothic rock influenced pieces, such as "Burning Halloween Town" or "Hades Castle," and even some electronica-focused compositions such as "Crossing the Ravine...," the soundtrack to Death Smiles is a definite must for any fan of Namiki, rock, or shooter soundtracks. With the integration of key motifs in the related stages, Namiki crafts an extremely cohesive soundtrack full of intensity and wonder. I fear Namiki may have set the bar a bit too high, because from now on, this is the standard by which I'll be judging him.

Executive Producer: Kenichi Takano
Album was composed by Иоганн Себастьян Бах / Манабу Намики / Natsuko Naitou / Такаюки Хиросе and was released on May 26, 2008. Soundtrack consists of tracks with duration over more than hour. Album was released by Cave.

Sounds like Rock - that's what we can say about this album. 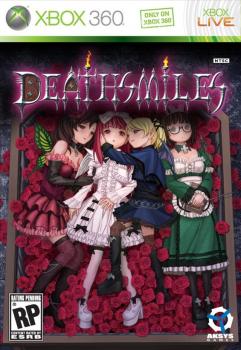