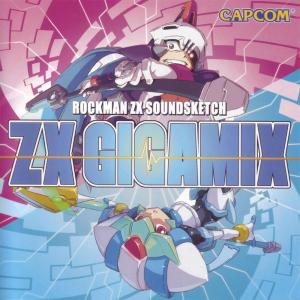 Although I'm not quite familiar with the Mega Man ZX series' music outside of playing the games, when I heard this album might be worth checking out due to its electronic focus, I figured I'd give it a shot. Arranged by various members of III, it features arrangements of music from the subseries, but at the same time, also throws in some drama tracks that tell a story. How does the album fare?

The album opens with "The Chosen One." This is a sinister arrangement with an industrial soundscape. Futuristic synth mixes with ominous industrial percussion effects, such as pounding metal, to create a very interesting blend of sound. Although not too long, it does manage to grab my attention. Next up, "Green Grass Gradation" is an extremely fun and bubbly theme that mixes futuristic soundscapes, a pretty catchy techno beat, and some clear Caribbean influences. It's got a great energy and I love dancing to it.

"Believe in Myself -feat. Grey-" is one of the vocal arrangements on the album. This one is an exhilarating techno theme with a rock influence. The vocalist, Hiromi Hirata, does a great job at matching the energy of the theme and her voice might appeal a bit more than most to those who aren't fans of Japanese vocals. The other vocal arrangement — "Be One -feat. Ashe-" — is definitely more electronically focused than the other arrangement, although you'll definitely hear some guitar work and some industrial accompaniments as well. The vocalist, Ami Koshimizu, also fits this theme quite well. Overall, it's quite a strong theme with a lot of energy.

"Whisper of Relics" is an exhilarating electronic theme with some pretty interesting effects, such as cascading scales with a reverberent effect, some bubblier synth, and a nice driving beat. Similarly exhilarating is "En-Trance Code." It features a pretty intoxicating beat, some nice piano work, and a mixture of synth soundscapes. I'm particularly impressed by the layering used in this one. It all seems to mesh together quite well. The vocaloid usage is also a great thing, but I'm one that loves autotuned vocals.

There are a couple of more relaxing arrangements as well. "Drifting Floe" is initially a more relaxing arrangement that comes complete with some effective industrial beats, crystalline synth work, beautiful piano lines, and even wind sound effects. As the theme progresses, these same elements are incorporated into a more upbeat techno theme. This is one of my favorite arrangements on the album. "Flow of the Times" is an arrangement that features a bit of a funk groove going on with it. It's a relaxing theme that combines a variety of various synth soundscapes to create a smooth experience. I'm a huge fan of the piano that is incorporated into the arrangement. It gives it a nice delicate tough.

"Brilliant Show Window" combines a bit of groove with a driving electronic beat and a very bubbly atmosphere. I really like the incorporation of the xylophone to help give it that sense of playfulness. The synth work, however, is what really makes the arrangement shine, in particular, the solo section. Lastly, "Battle Giga Mixture" a medley of a variety of battle themes from the game. Throughout the medley, the style changes drastically between themes. At times it is quite bubbly with some fantastic melodies, while at others it's quite sinister. During others, it's quite intense, but overall it's all very catchy. This is a great way to close the album.

Overall, this album is pretty solid. The electronic themes are well done, and although not as varied as some other electronically focused albums, it definitely brings with it plenty of energy. The soundsketches that are dispersed throughout the album interrupt the overall flow of the album, especially if you don't understand Japanese, but the music does help offset that inconvenience a bit. It's a strong effort by III and one worth checking out.