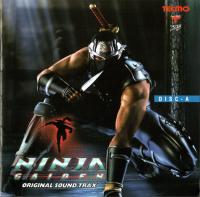 Ninja Gaiden was one of the holy NES trilogies. I spent tireless hours wrapped up in the action, cinematic sequences, and intensity of the gameplay. The music, even though running off the 8-bit SID chip, still was an integral part of this game. The opening sequence for Ninja Gaiden II: The Dark Sword of Chaos is still one of my favorite cinematics to this day. In fact, the franchise practically invented in-game cinematic sequences and took the story-telling element of action games to a whole new level. To the same extent, the revamped Ninja Gaiden series for Xbox and PlayStation 3 took hard-core gaming to a new level with superb graphics, play control and intense difficulty. So how does the music play a role in all of this?

The Ninja Gaiden Original Soundtrax pulls together a respectable team of Japanese composers to merge a sense of ancient Japanese culture with modern high-impact action music. For the most part, the soundtrack achieves what it so clearly sets out to do — the hard-edged, gritty electronic music shines during the game's sometimes excruciating levels. After all, anything less than the industrial and hardcore techno music we hear throughout the game would probably be a let-down.

That said, many of the traditional Japanese instruments that set the mood are used in a cursory manner. The shakuhachi one hears is used simply for effect with individual pitches and overblowing techniques. The same goes for the rest of the ancient pallet, where elegant instruments like the koto or shamisen, instead of carrying melody, are simply plucked as a sound effect within a greater, abstract landscape. Processed steel clangs and groans feture alongside vocal samples and taiko drumming, and many tracks simply use a pulsating synthesized bass drones to establish the minimal melodic content. Dark, brooding, and driven is clearly the theme and, while used effectively — as evidenced in "Vanishing Memories" — it's just not as ambitious as it could have been. The extensive use of samples becomes tedious if you listen closely to the orchestral sounds. The brass, for instance, as you hear it on "Military Strength" is timid and unrealistic. The vocal samples that are used sparingly throughout the score are again akin to a sound effect rather than an integrated part of the songs.

It is clear that the real gems in the soundtrack occur when the composers are able to shake off their respective nods to traditional Japanese roots and just go with the high-octane fight music that they do best. Some of the tracks are essentially 15-20 second vignettes that have been expanded in theme to last several minutes. However, with "Dinosaur", the intricate drum programming is countered with a constantly changing series of synthesizer patches and really gut-wrenching effects that have the processed, driven feel that players will remember. The piece flies by with little room for breath or breakdown in action.

A few tracks stand out for different reasons. "The Monastery", one of my favorites, has this simple, delicate nature to it. It demonstrates patience and a sense of minimalism that uses the sound design elements effectively to push through a mood. It has a bit of the feel of a Metal Gear Solid backing track, which may be why I'm more partial to it. The bass line echoes a theme that is carried across several other tracks in-game, heard in "Pray to God", where it is elaborated upon and given a string-section backing it up along with a number of processed sounds that give the track a great spatial range. "Forsaken Humanity" is another one of those standouts that builds from a Castlevania-esque church organ and choir into its dynamic drum and bass lines to good effect. I also like "Moat of Zarkhan" for its ability to pull together rhythms from traditional Indian classical music and couple it with some distinctly Japanese and electronic-based elements.

Essentially what gamers get out of Ninja Gaiden remake soundtrack is a diverse stand-alone collection of music. It features some great back-beats, some really driven and intense themes, and a few stabs at merging traditional Japanese music with modern counterparts. Some of the fusions could have been more artistic, but the final result is still effective. If you're looking for something to raise your blood pressure or get pumped up as you practice your skill with the Dragon Blade, Ninja Gaiden's soundtrack should deliver.

Album was composed by Макото Хосой / Ryo Koike / Wakana Hara and was released on April 20, 2004. Soundtrack consists of tracks with duration over more than hour. Album was released by Wake Up.