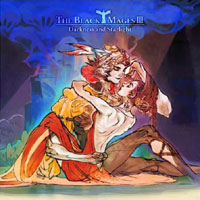 It's been a long time since I've eagerly anticipated an album as much as The Black Mages III ~Darkness and Starlight~. The promotional videos and music samples really wet my appetite and the declarations from the band members that this was 'their masterpiece' convinced me to purchase the album from Nobuo Uematsu's Dog Ears Records. It was clear from the videos that its production time was about three months even though its predecessor was released over three years ago. As a result, the previously anticipated rock-operatic second disc was not present and relatively few new arrangements were offered compared to their previous albums. The band nevertheless ensured the album excelled in terms of quality. For the first time, the arrangements used the talents of all members of the band except Nobuo Uematsu. The members focused meticulously on the often extremely complicated material provided to them in order to excel in the recording sessions at several major studios. Explicit efforts were also made to diversify and mature the band's sound. The result is the The Black Mages' finest effort to date.

Symbolic of a new dawn, Final Fantasy VII's "Opening ~ Bombing Mission" appropriately opens the album. It begins almost identically to the original with a synthetic violin note preparing a sorrowful bell motif, creating bundles of atmosphere and nostalgia. After 0:45, the band is heard for the first time with an electric guitarist playing the theme's fanfare against dense drums with impressive prowess. The heavy bass riff of the "Bombing Mission" section provides the backbone for the rest of Kenichiro Fukui's arrangement. With gritty overdriven guitar solos, flashy keyboard work, and integration of the previously acoustic motifs from the original piece, the band members declare themselves back with even more attitude than before while preserving the imagery and mood of the original.

The subsequent two tracks are arrangements of the final battle themes for Final Fantasy V and Final Fantasy VIII by Michio Okamiya. His gliding electric guitar work provides a definitive highlights of the album in "Neo ExDeath"; he presents the main melody with astonishing lyricism at a racing tempo and shines with a virtuosic solo in the centre of the piece. The dabs of the hilariously cheesy ExDeath motif only adds to the fun factor here. As for "The Extreme", the atmosphere of the opening of the original is maintained with a gentle combination of acoustic guitar, piano, and suspended synthetic strings. The intensity and velocity of the piece increases convincingly in the development section and there is a metamorphosis from use of acoustic instruments to purely electronic ones. It peaks with fast-paced keyboard runs and even faster arpeggiations and, after five minutes playtime, leads to a fantastic guitar-dominated coda. It's a small but substantial improvement on the already exceptional original.

Drummer Arata Hanyuda succeeds arranging Final Fantasy IX's "Assault of the Silver Dragons" despite having no prior experience. He focuses on several core leitmotifs from the original and transforms them from their original militaristic setting to something more synthy and uplifting. The arrangement is excellently paced, articulated, and layered, featuring probably the most experimental keyboard and guitar solos from the band to date. The fifth track is actually Kenichiro Fukui's arrangement of "This is the Last Battle" from Final Fantasy III's DS soundtrack. While the decision to recycle it adds to the disappointment about the lack of new material in this album, it's an incredibly solid track that most casual fans wouldn't have previously heard. The primary and secondary melodies here are fantastic here and the solos give Fukui a chance to show his amazing skills as a keyboardist.

Fukui also offers the central arrangement on the album, Final Fantasy XI's "Distant Worlds". Slow-paced, predominantly acoustic, and mostly ambient, the piece differs from anything the band has previously created. A mellow soundscape is provided in the introduction with a poignant mix of harp arpeggios, warm synth pads, and choir notes. A duet between Fukui on acoustic piano and Okamiya on acoustic guitar provides the verse from 1:20 and the fleeting appearance of a cantabile synth line leads to their initially contemplative version of the chorus. The unexpected addition of a drum kit and synth instruments in a pop-like manner leads to Okamiya's absolutely beautiful gut string guitar solo and an equally affecting recorder solo. Following the return of the piano passage to present the verse once more, an electric guitar from Sekito interrupts the arrangement at 5:30 and takes listeners on a lush romantic ride. Completely unexpected, this solo provides the definitive moment of the album for me before the piece ends as quietly and atmospherically as it begun.

Final Fantasy VIII's "Premonition" is the only solo arrangement of guitarist Tsuyoshi Sekito, previously the band's main arranger. Its dissonant ghostly introduction leads to a body focusing on resolute electric guitar melodies. Emphasising the irregular metre, an aggressive bass riff punctuates most of the piece in a way that resembles Sekito's approach on Dawn of Mana's battle themes. Indeed, the darkest, coldest, and most enigmatic arrangement on the album. Bassist Keiji Kawamori subsequently arranges Final Fantasy IX's underrated final battle theme "Grand Cross". My personal favourite on the album, it reflects the ideas of every member of the band — it incorporates an acoustic introduction, rough bass riffs, flashy solos, wonderful melodies, and plenty of hard rock flair. The last battle arrangement on the album is also the one that binds them all together. But the album doesn't end there... What of the title track?

Sekito, Fukui, and Okamiya join forces to create the arrangement of the opera sequence from Final Fantasy VI, "Darkness and Starlight". A track of epic proportions, it incorporates a dramatic atmospheric overture, a stunningly beautiful rendition and recapitulation of the aria, a duel sequence with powerful Japanese narration from Koori Masao, and, best of all, a completely original rocking section featuring bass, tenor, and chorus by four members of the band. I felt the brief appearance of the "Wedding Waltz" slightly disturbed the coherency of the piece and I also regretted the lack of "Grand Finale?", actually my favourite part of the opera sequence. However, the piece is still 15 minutes of pure bliss and the combination of rock instrumentalists and opera singers works surprisingly well. The album ends with Nobuo Uematsu's solo piano tribute "LIFE ~in memory of Keiten~", an original composition about Yoshitaka Tagawa whom the album is also dedicated to; the sad and profound backstory of this piece is explained on the album's official site.

The band was right to describe The Black Mages III ~Darkness and Starlight~ as 'their masterpiece'. Issues of quantity aside, the production values are top-notch, the track selection is excellent, and every single arrangement is fantastic. The band retains their attitude and sense of fun while also demonstrating their maturity and versatility with the superlative "Grand Cross", "Distant Worlds", and "Mario and Draco". Everything comes together excellently resulting in a diverse, emotional, and entertaining experience. Highly recommended.

All Music Composed by Nobuo Uematsu


All Music Produced by Nobuo Uematsu

except Tr#1
Mixed by Yasuhisa Kataoka (I to I communications Inc.)
Assisted by Yasuaki Kishimoto (MARUNI STUDIO)
Mixed at MARUNI STUDIO


This album is dedicated to Yoshitaka Tagawa