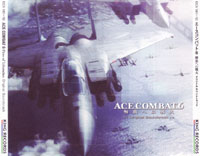 Ace Combat 6: Fires of Liberation brought the series to the next generation with an instalment on the Xbox 360. Once again, Keiki Kobayashi, Tetsukazu Nakanishi, Hiroshi Okubo, and Junichi Nakatsuru returned to depict battlefields in the sky, joined by event composer Ryuichi Takada. Rather than transform the series' music once more, they chose to stay close to the style of Ace Combat 5: The Unsung War by focusing on militaristic orchestral tracks and seamless fusions with rock and electronic elements. However, they slightly modified their approach with their use of subtly affecting atmospheric soundscapes rather than all-out epics. Although still a masterpiece in the game, this soundtrack isn't as satisfying as its predecessors on a stand-alone level...

The opening main theme reflects the orchestral direction for the score with an emotional performance by the Bulgarian Symphony Orchestra. Each section offers a courageous yet wistful melody that sounds like it could easily fit in a Medal of Honor title. It also reflects the more cinematic direction of the series with the dramatic twists and turns along the way used to complement the visuals. It's definitely the most personal main theme of the series and the high production values are a big plus too. The first stage theme "Invasion of Gracemeria" has a more familiar tone with its orchestral melodies and backing with percussive and electronic elements. In series' tradition, the first 90 seconds are relatively ambient to accompany the flight to the centre of the action. However, the more edgy percussion work from then onwards captures listener's interest and the soft anthemic string melody is introduced at 2:08. The shape of the melody is as elegant and bittersweet as the main theme, but it keeps venturing to new heights to maintain the momentum during the mission. Subsequently "Through the Heart of a Nation" provides one of the series' slow-building tension themes and, with Kobayashi behind it once more, listeners are guaranteed a subtle treat. If only all the soundtrack maintained this quality...

Tetsukazu Nakanishi's menu themes for the game are a considerable regression from what he offered in earlier soundtracks. These tracks have the fingerprints of being composed in a complete rush, mostly built around minimalistic figures and electronic ambience. Some can be barely considered music at all. For example, "Start Up" merely consists of a one bar electronic run and some thunderous sound effects while "Campaign Menu 2" is even worse. Even those that have a bit more substance, such as the main theme reprise in "Campaign Menu I" or the rock-orchestral work in "Sortie I", soon become extremely repetitious. Although the menu themes have never been major highlights of the Ace Combat albums, never have they been as sloppy and uninspiring as this. The filler ratio is also increased due to an abundance of short or uninspired event themes. Ryuichi Takada attempts to develop an impressionistic or minimalistic piano-based style to enhance the personal and reflective feel of these cutscenes. While some tracks are simple yet elegant such as "Being Left Behind", "Ludmila", many others are weak such as the repetitive "The Man Who Has Broken Wings", amateurish "On the Field of Emmeria", or clumsy "The Ancient Trap Door". Creativity clearly doesn't come across well when it is being used as a disguise for laziness.

In spite of the surplus of filler themes, the actual stage themes are generally good quality. "Vitoze Aerial Defense" is unusual twist since it presents Kobayashi's typical brassy orchestration with industrial rock riffs. Nakanishi also displays his capacity to create more substantial compositions. For example, "Sipli Field" slowly builds tension with edgy rhythms emulating those of an aircraft, while "Ragno Fortress" is a percussively driven epic that is ideal for traversing dark labyrinths. Beautifully complementing the scenery of snowcapped mountains, "Selumna Peak" evolves into a subtly motivating militaristic anthem featuring hesitant renditions of the main theme. Alhough few are as memorable as his Ace Combat 4 themes and there is a tendency for thin orchestration, these tracks have a stunning effect in context. Junichi Nakatsuru's contribution is small this time, but he still reinforces the atmospheric focus of the soundtrack with the electro-orchestral gem "Bartolomeo Fortress" and, with a combination of funky bass guitar work and bold orchestration, the furious "Anea Landing". Once again, Hiroshi Okubo tends to focus on almost entirely percussive tracks, such as "Echoes of Battle" and "City Lights", but they work better than many of his previous efforts given their punctuated cross-rhythms and tense layering. However, he occasionally rocks out too such as with the main theme reprise "Weapons of Mass Destruction".

Moving towards the climax of the game, Keiki Kobayashi's "The Liberation of Gracemeria" is easily the biggest highlight of the soundtrack. This is a seven minute synth orchestral rendition of the theme previously featured in "Invasion of Gracemeria" and "Fires of Liberation". Although it takes some time to get going given the nature of the mission, the build-up creates a lot of expectation and the recapitulation of the melody from the 3:10 makes it worthwhile. The rich brass and trumpet performances perfectly capture the valour and determination of the rebel forces during the decisive mission while the heavily punctuated bass line maintains a sense of danger. Before the final battle, Nakanishi's "Malebolge" elaborates upon the experimental electronic influence of the soundtrack and Kobayashi's "Gracemeria Patrol" provides one more tense brass-based theme. The final mission theme "Chandelier" features a soothing a capella performance of the main theme by the Trinity Boys Choir. This is quite a change from the usually orchestral pomp of the series, but works so beautifully in context and is fitting with the overall atmospheric feel of the soundtrack. The choral writing is exquisite and the performance is wonderful. The Trinity Boys Choir and Bulgarian Symphony Orchestra return for the ending theme. It salutes all the pilots who died during the war while expressing relief at the 'bright new day'. The classically-oriented quite refreshing after the pop-influenced ending theme for previous instalments.

The Ace Combat 6 Fires of Liberation Original Soundtrack is the first of the series' scores to potentially disappoint. For one, it has a much higher number of vapid tracks than before, particularly due to Nakanishi's minimalist electronic menu themes and Takada's simple piano-based event themes. On a wider basis, the score doesn't feel like it offers many stylistic or technical progressions contrary to previous scores in the series, with most tracks sounding continuous with yet often inferior to Ace Combat 5: The Unsung War. There are some innovations, however, such as the use of more ambient soundscapes, more personal war lamentations, and a few full orchestra and chorus tracks. The score mostly works beautifully in the game too — and even the event and menu themes are effective in this regard — so it is quite a professional accomplishment overall. This soundtrack is still worthwhile for those who can't get enough of the Ace Combat sound, but expect a relatively subdued ride and a number of bumps along the way.

Album was composed by Хироси Окубо / Junichi Nakatsuru / Кэйки Кобаяси / Рюити Такада / Tetsukazu Nakanishi and was released on November 21, 2007. Soundtrack consists of tracks with duration over more than 2 hours. Album was released by King Records.

Sounds like Classical, Score - that's what we can say about this album.