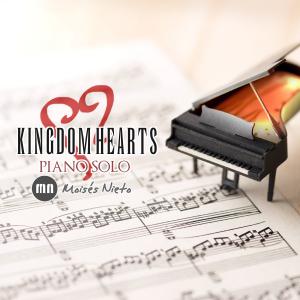 
"Kingdom Hearts is my favourite video game series ever, I've loved it since I played Kingdom Hearts 1 back in 2002! The original soundtrack, mostly composed by Yoko Shimomura, is simply incredible and has always been a great source of inspiration to me.

Because of my love for these games, I decided to gather some of the songs in an album; most of the included pieces are easy piano versions included in the official KH Piano Solo book; not all of them though! Thanks to these guys for creating the following fan arrangements:

Chris Lamb for the Fate of the Unknown arr.
Kyle Landry for the Passion arr.
Ichigo Sheet Music for the Hikari arr.
Sebastian Wolff for the Traverse Town arr.
Cessebabe for the Ventus arr.
Ryndal for the At Dusk I will Always Think Of You arr."

Tracks preview provided by iTunes. If you like Kingdom Hearts: Piano Solo, we strongly recommend to buy it. Support composers, artists and performers so they can release more music in the future. Furthermore, it's inexpensive. This album costs only 9.99 USD. Prices and shops where you can buy it are at the right column.