Joe Romersa ~ You Are Here 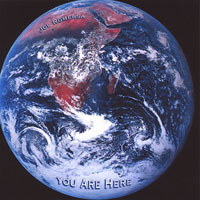 A Citizen of Planet Earth
Joe Romersa. If you’ve ever heard this name, then it only related to the songs Hometown and Cradle of Forest with deep if not to say brutal vocal from Silent Hill 3 and Silent Hill 4. For the great majority of Silent Hill fans Joe still remains the author of these two hits. However it’s absurdly to think that the rest of the time he twiddled his thumbs. Rather! Joe’s voice is well-known in the anime industry – you can hear it in more than 100 Japanese animated films dubbed into English. There’s one more completely unexplored among younger fans activity of this talented man. It’s music. And here Joe acts as a unique and all-in-one person. Being a multy-instrumentalist (he plays drums, guitar, bass guitar, keyboards, electro organ, brass and many other instruments) and playing in various groups at one time he also composes his own music (including tracks for games and movies), and is a professional producer and sound engineer (he worked with such other musicians as John Prine (where he was given a Grammy for participating as Recording engineer), Bob Dylan, etc).

And of course Joe writes the lyrics for a number of singers. Among his major customers we can name genious Akira Yamaoka, composer of Silent Hill series. That’s why the first associations with Romersa want you or not will be induced by Silent Hill. In spite of the similar technical methods of composition (active using of guitars, keyboards and mystical background sounds) their creative work is connected mostly in spirit than musically. But to tell the truth some Romersa’s tracks could easily become a music score for these games. That’s quite a bold but valid statement: the romantic feelings with which Romersa’s music is saturated bear an obvious resemblance to the emotions from the Yamaoka’s works.

When he isn’t writing the sort of “couplet – refrain – one more couplet” songs, in his spare time Joe is experimenting with sounds and melodies. The collection of musical moods You Are Here is the fruit of such experiments. It’s an easy instrumental music composed just for amusement and because of this free of genre limits and claims for all-embracing love from Silent Hill fans (as usual fanatic people have conservative tastes – you can’t please them). Not everyone will venture to listen to the album described in press as free of genre limits. Joe took care of this part of potential audience and characterized his work as Strange Instrumental Trance Spacey Music. In simpler words “You Are Here” is a new-wave music, sometimes plunging into trance and ambient, resembling atmospheric tracks by Moby from the bonus CD of the album Hotel and having much in common with music of Brian Eno, another citizen of planet Earth who invented ambient as a music genre.

The album’s opening track is a completely crazy work entitled Feel Better – a looped phrase “Feel better” is addressed to those who are in low spirits and don’t fell very well. To lift the spirits Joe recommends listening to this track several times a day. In my turn I advise not to abuse of it so as not to find yourself in an asylum. Get Up And Move goes after this track and might as well have been an arrangement of some pop hit – everything is combined so perfectly. Let it be lacking in vocal, but listen to Maybe This Will Help. In this case the vocal serves as a decorative element nevertheless it is laid down on the melody very elegantly.

As for the following tracks there Joe plunges in experimental and cosmic sound deeper and deeper. Space is known to be a full darkness and the more you are listening to the release the clearer proof of these words you receive. Check Out My Universe is a mysterious improvisation on KORG synth, the next Kick Back is written in a romantic mood when bass, and lazy electro guitar fingering join the floating KORG sound. After the rhythmical trance Did You Redo? (resembles Moby’s track “Swear” in composition) and the dance Star Dance, the lulling melodies Discovery Zone and Om Eye God are present (recalls for Sun Temple by Bjorn Lynne). The loud Drone again calls to divert sleeping and serves as connecting link among the tracks of the following rhythmical part, viz Q and Bells of Time. The entirely minimalistic Whales is the closing track of the CD. And if we have already mentioned Bjorn Lynne it’s high time we recommended his wonderful progressive album Beneath Another Sky which is a sort of a predecessor of “You Are Here” but with deliberately more electronic sound.

Like Joe’s borrowing the names of the vocal tracks in Silent Hill: Zero from Black Sabbath, AC/DC and Tricky, here the album title You Are Here is rhymed with the song name You Are Not Here from Silent Hill 3. As for the other track names they are ranged like a sequence of linked messages creating the Story line for your personal impressions (“Get Up And Move” – “Kick Back” – “Maybe This Will Help”).

It’s rather hard to say whether this album is an appropriate place for live drums. The contemporary plug-ins long ago learned to imitate an acoustic beat of a new generation, which even an experienced drummer can’t differ from the live drums. However here Joe drops a hint either – as one of the tracks is entitled Nice Drum Track Dude. Everything is in its respective place. We’ve got nothing more to probe into. Looking forward to a new song album.

Sounds like Acoustic, Ambient, Electronica, Instrument, Instrumental, World - that's what we can say about this album.