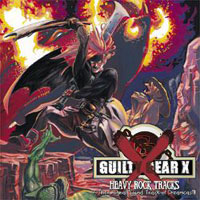 Fighting games aren't as popular as they once were. At one point, I considered them to be an equally respectable source of game music along with RPGs. However, with Capcom's recent utter failure to deliver anything close to the quality of 1998's Marvel VS Capcom and SNK's slow death, it would not be a stretch to say the Guilty Gear series is the only thing keeping the fighting genre viable-both in gameplay and in music.

In many ways, the music is the thing that makes the series stand out. Unlike many fighting soundtracks that squeeze every drop of life they can out of techno music (cough... Capcom), Guilty Gear revolves around hard hitting guitars and melodies that bring the characters they represent to life. It is an incredibly simple idea being implemented (using rock music in a fighting game), but the results are nothing short of astounding. As it stands, there is no soundtrack I can think of that breaches perfection the way Guilty Gear X Heavy Rock Tracks does.

The success of this CD should come as no surprise; the original Guilty Gear soundtrack was the first major source of rock game music to pop its head out of the water, long after the Konami Battle Albums and the J.D.K. Band had vanished into the sunset. Featuring awesome compositions by the unknown, but ultra-talented Daisuke Ishiwatari (keep in mind that he is also the general producer of the game and is the voice actor for Sol Badguy), it showed just how awesome a fighting game soundtrack can be when its done right: powerful guitars, memorable melodies, and plenty of character make it a classic. When the sequel was announced, the score took a stumbling block with the release of the synth-only arcade soundtrack to Guilty Gear X, before the producers came to the realization that live instruments were the way to go. That said, by combining live instruments and compositions that manage to surpass the original by a good margin, Ishiwatari and company have let loose a five headed, fire-breathing monster on the game music world that has yet to be contained. The end result is the equivalent of sticking that monster underneath the CD laser and listening to it.

Most of the tracks on here are brand-new compositions for the series. Four of them return from the original Guilty Gear soundtrack in a powered-up form and two more borrow heavily from their original character themes. Being a fan of the original, I was skeptical as to how some of these new tracks would replace my old favorites. When I first listened to the arcade soundtrack, I was not happy in the least; the grinding Sega Genesis quality bass made them all but impossible to enjoy. When I got Heavy Rock Tracks, all was forgiven. The coals on the arcade soundtrack formed to diamonds with the new instrument set. Bass heavy tracks, like "A Solitude that Asks Nothing in Return", "Bloodstained Lineage", and "Liquor Bar and Drunkard," which are simply intolerable on the arcade soundtrack, became instant favorites.

Picking favorites from this soundtrack is like picking through a dessert menu; it's all going to taste good, but different as well. Hands down, this is the best version of "Holy Orders (Be Just or Be Dead)." The part in the center, where the guitars come exploding out of the organs, is one that is guaranteed to make your hair stand on end in utter amazement. It's easily my favorite of the returning tracks. Of the newer tracks, I have to give my nod to both Venom's "A Solitude that Asks Nothing in Return" and Johnny's "Liquor Bar and Drunkard." I've affectionately dubbed "A Solitude that Asks Nothing in Return" as the demon rave, because that's exactly what it sounds like, a bunch of demons throwing an illegal party and having a wild time. The organ solo in the middle sounds like something ripped clean out of Castlevania, plus you have a synthesizer which sounds like a police siren. "Liquor Bar and Drunkard" is just one incredible thrash session from start to end. Johnny is probably my favorite of the Guilty Gear X characters, mostly because he's such a badass and I can't picture him without this bass-guitar driven theme playing in the background. Both of these pieces are incredible from start to finish.

There are plenty of other worthy mentions as well. "The Original" uses most of the patterns of "Suspicious Cook" from the original Guilty Gear soundtrack, while adding in a saxophone. "Bloodstained Lineage" (thankfully spelled the right way here — it was misspelled "Bloodsained Lineage" on the arcade soundtrack) is probably the track that reminds me the most of the Dracula Battle CDs. It's Testament's theme, who could probably make the cut as a boss in a Castlevania game (he looks like the Grim Reaper). At one point, about four minutes in, the drummer just goes ballistic, probably my favorite moment on the whole CD. "Keep Yourself Alive 2" improves on the original "Keep Yourself Alive", by emulating Sol's skulking, cocky attitude. It's a great track to put on the beginning of the CD, because it serves as more of a hint of what's to come and sets up the following tracks. The track that makes me appreciate this new bass sound the most is "Feel a Fear." It's not very melodic, but I could listen to that wonderful bass guitar slam notes into my ear all day. Mentioning anymore would simply be redundant, every piece boasts something that makes them stand out. I've simply highlighted the ones I feel are most noteworthy. Besides, would you rather read everything on the dessert menu or eat everything on the dessert menu?

In reality, there's nothing bad at all about this CD. The liners could use some more information and there is the fact that a few tracks from the arcade soundtrack have been left off, but those are moot points compared to what's on here (the reason for the missing tracks is probably to keep this at a single disc, the running time is already 71 minutes). The only bad thing about this CD is that years after its release, there are actually two soundtracks that can keep up with it and make solid alternatives. Ironically, the Guilty Gear XX Original Soundtrack and Guilty Gear XX Sound Alive give Hard Rock Tracks some major competition. Although many of the themes are repeated on all three soundtracks, I have found about half of the ones on Hard Rock Tracks to be the best overall versions (mostly the bass-heavy ones, like "A Solitude that Asks Nothing in Return" and "Bloodstained Lineage"). While Sound Alive has a smoldering live performance behind it and the XX Original Soundtrack is the most "complete" soundtrack (Disc One is mostly remakes of what's on Hard Rock Tracks, Disc Two is mostly new material), Hard Rock Tracks is probably the most consistent of the three. If you like one, don't hesitate to pick up the others.

Even if you're skeptical about hard rock, this is something that everyone should experience in their lifetime. It's rare to have this type of heart-pounding sound without some form of vocals, but it's even rarer that the compositions reach this overall level of greatness.This is the disc I turn to when people bring up the concept of "real music" VS game music. The look on their faces after blasting "Holy Orders" in their ear is worth the price of the CD alone. Memorizing this disc note for note has been one of the highlights of my lifetime and I highly encourage anyone to consider adding it to their music collection. My hats off to Daisuke Ishiwatari and his crew for all their fantastic work and I can't wait for the next game in this legendary series.

We all like fighting games, right? No, we don't... How do you generally feel about fighting game music? It's usually bad, right? OK, for those of you who like hard rock music, were you aware of a series of fighters with a great metal soundtrack? If no, welcome to Guilty Gear 101. Guilty Gear is a series made by a company cally Sammy. The composer, Daisuke Ishiwatari, also serves as the game's character designer, director, etc. His name is a good reason for the series' success so far. Now let's take a look at Guilty Gear X Heavy Rock Tracks, arguably the musical pinnacle of the series.

Most of the album is very fast-paced and heavy on electric guitars, bass guitars, drums, and all that you'd expect from a hard rock album. However, Guilty Gear X Heavy Rock Tracks takes instrumental rock to a new level of brilliance. Most soundtracks during 2001 were created with synthesizers, while Ishiwatari decides to put more effort in his creations and asks three people to perform the score using live instruments. This result is amazing.

Ishiwatari also goes further than the usual rock band and implements musical instruments not usually associated with hard rock. Would you believe an organ, a saxophone, and even a bit of jazz piano feature here? Yup! The organ is first heard in "Holy Orders (Be Just or Be Dead)"; after a few notes, the electric guitars start ripping through the track, and the organ keeps on backing the guitars in the background throughout most of the track. It gives a heavy religious feel, with is ironic as some people consider rock music to be satanic!

"The Original" starts off with some percussion instruments, then the electric guitars make their entrance backed up by saxophones, giving it a obvious jazzy feel. The result is very unique and cool. After a while, the jazz piano has a cameo before the guitars and saxophones come back for another round. For pure hard rock goodness, "Still in the Dark" is a sure winner — you get nothing but guitars all the way till the end. This track even puts some songs from Iron Maiden and Metallica to shame. It's that good!!!

Album was composed by Дайсукэ Исиватари and was released on January 17, 2001. Soundtrack consists of tracks with duration over more than hour. Album was released by First Smile Entertainment.