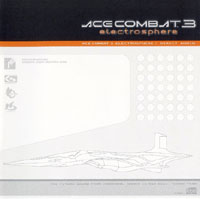 Given the tone of the game, it seemed appropriate for the Ace Combat 3: Electrosphere soundtrack to be more mature and intricate than preceding entries in the series. It finally scrapped the cheesy funk-rock approach of the old Arcade games in favour of an intense and experimental electronic style. Much like Ridge Racer Type 4 before it, this score redefines the series' music and uses a much warmer synthesizer style. Although the electronic style featured here hasn't become a trademark of the series, given Ace Combat 04 won acclaim with its orchestral approach, it remains fondly remembered as one of Namco's most creative soundtracks...

The two-tiered opener "Engage" instantly demonstrates the soundtrack's high production values. It's very clear that Tetsukazu Nakanishi knows how to layer those beats to create compelling rhythms and dynamic timbres. What's more, the sampling and mixing is superbly done resulting in very smooth, rich, and realistic soundscapes that simultaneously stimulate yet sooth listeners. Unlike so many electronica artists out there, Nakanishi also knows exactly how much repetition is appropriate. In "Linkage", for instance, Nakanishi repeats the major features at brisk pace to achieve intense, almost martial, rhythms; however, he is also sure to dazzle listeners later in the track with all sorts of treble and bass features that go beyond being superficial frills. Other tracks like "Transparent Blue" and "Montage" repeat many of the focal elements, but this is no problem since the core elements are beautiful and the repetition just adds to the meditative effect.

While an action game, there is plenty of diversity in the soundtrack nonetheless. Tracks such as "Mind Flow" and "Eye of the Storm" demonstrate Nakanishi's flair for layering different forces to a tense effect; the latter is especially interesting given it amalgamates percussion rhythms, electronic beats, and sound effects into one explosive palette. Others such as "The Maneuver" and "Alert" get the intensity going right from the start with jagged hooks and abrasive textures to impressive effect on-screen. Some even feature 'novelty' elements. For instance, the vocorder of "Physical Layer" literally speaks 'danger' against dense drum 'n bass beats while "Defiled" literally erupts on screen with its sporadic distortion and hard-edged percussion. Nonetheless, he is keen to offer a few lighter tracks nonetheless, such as sensual "Frozen Soul", frivolous "Camber", colourful "Child's Play", or relaxing "Armory", while still maintaining a largely electronic focus.

The co-composers for Ace Combat 3: Electrosphere offer novel musicality as well. Koji Nakagawa demonstrates he knows how to create interesting techno music with his irregular disruptive cross-rhythms in "Miles Above" and penetrating industrial sounds of "Turbulence". "Freefall" is a pretty fascinating experiment for a video game too, focusing principally on the aggressive timbres of industrial percussion while gradually introducing introspective warped synthpads. "Virgo" is a curious twist on the typical epic pipe organ solos that often occur in games while "Shorelines" and "Kernel" demonstrate his principle skill as a sound effects engineer and are arguably not music at all. Although his role is small, returnee Hiroshi Okubo produced some solid contributions to Electrosphere. "The Protocol" is one particularly good example of how the Ridge Racer composer gradually layers electronic forces in a musically modest yet emotionally affecting way.

Masaru Shiina also made his soundtrack debut on this album although his contributions are a little different to what most might expect. He manages to scape "Quartz" into an electronic chillout track in spite of subsidiary elements such as industrial sound effects and horror chime bells. "Liquid Air" offers an even more dynamic and unusual blend of elements, from trippy electronic beats to jazzy soprano saxophones to martial percussion rhythms to ambient sound effects. The result hotchpotch sounds unique and imaginative yet surprisingly smooth and natural too. "Revelation", on the other hand, has an amazing impact in the game with the modernist piano work and eerie synth distortions in the intrduction before evolving into an all-out pumped-up electro-acoustic action theme. As with the rest of her career at Namco, Kanako Kakino chooses to keep her profile here, but still seamlessly integrates into the score. "Black Lotus" and "Shattered Stones" are particularly representative of the percussive aspect of the score.

Side by side with the Ridge Racer Type 4 Direct Audio, the Ace Combat 3 Electrosphere Direct Audio redefines Namco's music as it transitioned from the Sampling Masters to Okubo and Nakanishi, from Arcade to PlayStation. The resultant score does a fine job complementing a serious game while keeping stand-alone listeners fascinated. However, just keep in mind that this score sounds nothing like the other Ace Combat scores and the target audience is really those into experimental electronica. Even now, it stands up among the best of electronic game music due to the superb composition and implementation alike, so it is well worth trying out.