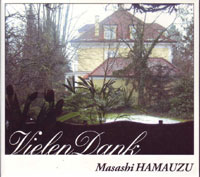 Many people came to discover Masashi Hamauzu through his work on SaGa Frontier II. I was a bit behind this crowd, discovering him through Final Fantasy X. Stupidly, I made a compilation of all the best tracks from Final Fantasy X, thinking that Uematsu had composed the whole thing! Then I discovered that there were two other composers onboard for that project. I went through all the tracks and checked who wrote what. It turns out that, except for maybe three tracks, all my favourites were written by Masashi Hamauzu. I thought his music was just tops, but it was a while before I began to expand my collection of his work. As that happened, I very quickly began to fall in love with his piano work. Dirge of Cerberus introduced me to a wondrous new thing: Hamauzu with a live orchestra. When news came my way of an album consisting of new arrangements and new compositions by Hamauzu, I nearly passed out. It took quite a while to get the CD, and when I did, it turned out to be quite different than I thought it would be.

The first thing you'll notice about the tracklist is that it is in German. Yes, the title of this album is Vielen Dank, but I still wasn't anticipating this, although it was fun to try to translate it all. The first eleven pieces are all original compositions for solo piano. If you're expecting anything close to Hamauzu's arrangements on either the SaGa Frontier II Piano Pieces or Final Fantasy X Piano Collections albums, you'll be rather disappointed. These compositions have a very classy, accomplished feel to them. While back in his 'old days', Hamauzu's compositions were almost recklessly lively, these are much more somber and subtle and show Hamauzu's maturity as a composer. "Winterhof" features a lovely, wandering, and flowing melody. Each phrase Hamauzu writes is a logical departure from the previous one, but he never lets familiarity set in. "Waldchen" continues a streak of subtle pieces evoking complex emotions. The melody here is also indeterminate, never quite sure of where it's leading to, but always reaching a satisfying climax. These pieces are quite short and the writing here is sparse. "Kinderspiel" comes closer to the Hamauzu most of us have come to love. It is lighthearted, but it still grounded with flowing and rich harmonies, as well as superb playing by Naoko Endo. "Das Zelt im Garten" is even more lively and bouncy, yet not as distinctly Hamauzu. Like the ones before it, though, it does show Hamauzu's talent with melodies. "Maiglockchen" is a bit jarring because of its staccato nature. It contrasts fast phrases with slower ones, and jaunty, book-end sections with a short, slower, reflective one.

"Feuerdorn" is one of my favourites because it fits the description I made earlier: "The melody is indeterminate, never quite sure of where it's leading, but always reaches a satisfying climax". This piece is perhaps even more true than the others because of Hamauzu's interesting rhythmic choices and the fact that this piece gains more volume than the previous ones. I always tend to mix up "Die Ranke" and "Waldchen", because their structures are quite similar, except "Die Ranke" is a bit more dissonant and more flowing, never stopping for a rest until the end. "Kleine Teestunde" has that distinct Hamauzu sound, reminding me at times of his "Symphony of Fire" tracks from Musashiden II Blademaster. It is one of the most pleasant, major-key original compositions on this album, and is replete with a sense of nostalgia. I don't particularly care for "Die alte Hausmauer" because, like "Maiglockchen", it constrasts staccato with legato; I believe here that the contrast here is too great, with the bookend sections being too jarring, perhaps even harsh. Perhaps the most familiar sounding of the new compositions is "Kaki", featuring bold staccato, jarring dissonance, and shifting metres. It reminds me a great deal of his piano arrangements of "Assault" and "Decisive Battle" from Final Fantasy X. "Abschiedskusschen" returns us to the more reflective, subtle side of Hamauzu's compositions. It features a simple phrase being adjusted, developed, and finally reprised. After hearing these eleven pieces for the first time, I was a bit disappointed. They were much more complex, subtle, and somber than most other Hamauzu pieces, but now I've grown to admire the fact that, though most of these pieces are barely over a minute, each piece is very self-contained. They are all very polished and sound very complete, presenting an idea, and letting that idea reach full fruition before the track is finished. Once I came to understand that, the pieces began to grow on me.

Now onto the arrangements. First, we are presented with some selections from Hamauzu's Musashiden II. "Feuersinfonie I" features the same kind of nostalgia that "Kleine Teestunde" embodied so effortlessly. The harmonies here are richer than the previous pieces and the melody is very cheery, even catchy. "Stummer Dialog" is one of the highlights of the album for me. It features Hamauzu at his hypnotic best. There isn't much melody content, but rather a series of soft, dissonant chord progressions with a constant rhythm. The thing I admire about this piece is that it is one of Hamauzu's most dissonant creations, yet it is also one of his most beautiful. The material repeats, gaining more volume each time until it reaches its climax, with some different rhythms thrown in for good measure. "Aquas Erinnerung" is a lovely flowing piece with a simple melody being expanded upon with some interesting harmonic flourishes. "Ewiges Leid" is one of the longer tracks on the album featuring a repeating phrase amid shifting harmonies. The melody itself isn't quite spectacular, but it's the chords and dissonances and changes in rhythm underneath that make it superb and undeniably Hamauzu. Now comes "Feuersinfonie II", and as great as a piece as it is, one arrangement was quite enough. It would have been nice to see an arrangement of something like "Aeolic Guardian" instead of a reprise "Feuersinfonie". I guess it helps to provide a nice bookend.

The selections from SaGa Frontier II came as a huge disappointment to me. Why? Because there is only one track that wasn't already arranged on the Piano Pieces album. "Zufall" is interesting, again, because of a single, repeated phrase with creative harmonies underneath. If you listen in the middle section where the real development, Hamauzu even gives a nod to his theme for SaGa Frontier II. "Botschaft" is, again, nearly identical to its Piano Pieces counterpart, except that it is repeated, making it needlessly twice as long. Even still, it presents a nice melody, even if it doesn't quite sound like Hamauzu. I used to have "Interludium" as my ringtone for a while. Something I've lamented about both this and the other arrangement is that they never quite catch the bouncy pleasantness of the original. Sure, they're nice, but not at all staccato enough. The melody is constant, never slowing down, and in the middle section, the first new instrument besides piano is heard. A flute takes over the melody in the mid-section while the piano is allowed to provide the harmony. "Feldschalacht V" does not correspond to any particular track on the SaGa Frontier II Original Soundtrack, but is rather an arrangement of much of the melodic content of that album. The sound is rich and sonorous as Hamauzu uses a string quartet in addition to the piano. The result is a highlight of the album. There is, sadly, only one piece from Final Fantasy X here, but it still manages to be a highlight of the album. "Jenseits der Finsternis" is an arrangement of "To the End of the Abyss", one of my favorite pieces from the original soundtrack. The piece is considerably lighter here, being arranged for piano quintet. The piano takes the melody, aided by the violin as the rest of the strings enhance the staccato nature of the piece. In the softer section, the violin is allowed to shine with its lush tones and silky smooth sound.

Two more original pieces are now presented. The first, "Eisblauer Himmel" features the piano quintet and the flute. The melody is first heard in a very bouncy, staccato tone, giving the impression that this will be another lighthearted, quirky track. The melody, however, is then performed much slower and flowingly. This track excels at showing Hamauzu's excellent interaction between all the instruments. "Die Wahrheit" is one of my favourites by Hamauzu, featuring interesting rhythms, constantly changing metres, a bouncy nature, and, again, amazing interaction between the strings and the piano. At about fifty seconds in, the violin doubles the piano before moving into another contrasting section. This piece is full of creative dissonances, and the churning piano figures underneath flowing strings melodies at times create a wonderful piece. I was disappointed again, though, with the selections from Dirge of Cerberus, one of my favourite albums by Hamauzu. He chose to arrange the love theme for Vincent and Lucrecia with "Vergassene Tranen", but even in this piece, the main melody doesn't come in until nearly the end of the piece. After such a complex powerhouse as "Die Wahrheit", the simplicity of "Vergassene Tranen" is a bit of a letdown. The sound is very sparse, although it is still a very dissonant piece. The piece seems to wander before coming to a great pause. After this, the main melody is heard by itself, with very little in the way of harmonies. Though the next piece follows suit in being another simplistic arrangement, it has the luck of featuring one of my favourite melodies by Hamauzu. The main theme from Dirge of Cerberus is presented in a simple manner, with simple harmonies. It features a single phrase, at first sounding somber, then it repeats a step down, and it is suddenly hopeful.

I know that after hearing Hamauzu's creativity with some of the arrangements and all of the original pieces, some may be disappointed by "Aufsteigende Flugel", the arrangement of Unlimited SaGa's "Soaring Wings". It is very straightforward with very little of that creative dissonance that characterizes some of Hamauzu's best works, but it is also one of the highlights of the album, maybe even my favourite track, because of its wondrous melodic content. It also happens to be the longest piece on the album. The first section is very soft, giving way to the main melody. It is another example of Hamauzu's flawless juxtaposition between dismal and hopeful phrases, although this piece, unlike many others, seems to border on hopeful. The refrain of the melody is my favourite part, taking on an almost waltz-like sound. The material repeats with more intensity and harmonic flourishes. The piece ends very calmly with a soft tremolo by the piano.

This album features some amazing pieces, but can still be very much classified as a 'mixed bag'. Hamauzu never seems to get comfortable with either his more intelligent, complex compositions or his straightforward, simplistic arrangements. Also, the length of the album comes out to be less than fifty minutes, making me wish Hamauzu had filled out that last half-hour. There are a few tracks that do not sound like they came from Hamauzu's pen, lacking his usual melodic and harmonic sensibilities. Despite some of the lesser arrangements, the thing that truly makes this album great is Hamauzu's original compositions. They are polished and show a maturity that had not yet been heard by him. One other great thing about this album is that it features Hamauzu's compositions from all the stages in his career, making it interesting to see how he's progressed in his style. This album requires an open mind when listening the first time. There are absolutely no instances of the outright musical flamboyance Hamauzu is capable of, and most of the pieces are actually very somber, but this album still carries a rather high recommendation.