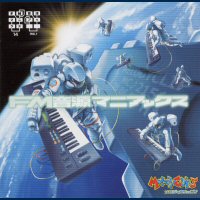 The album opens up with Motoi Sakuraba and his composition, "Reminiscence". This composition, especially with the sound used, reminds me a lot of his works when he was part of Wolfteam. While there is an overall progressive rock sound, it's not as flashy as some might expect from his later works. In fact, it's a bit reminiscent of his Gikyokuonsou works, at least the less flashy ones there. It's a pretty good composition that definitely seems to draw upon his earlier compositions rather than his later ones.

Along the lines of adapting styles to fit this synth sound, a few composers also fit quite well into this category. Shinji Hosoe, of SuperSweep, contributes "Liquid soup". This theme also relies on the uniqueness of the FM Sound Module to create some interesting synth effects, which aren't too far off from stuff that he uses today. It boasts a pretty spacey melody and is pretty bubbly at times. Nobuyoshi Sano's unique style is also amplified using this synth. In fact, I think it's actually a bit more tolerable, as I find some of his more modern synths to be a bit on the grating side. The composition itself isn't the greatest, but the subtle development and layering makes it a fairly decent listen.

Hiroshi Okubo's contribution, "Feeling Melodic," is also pretty nice. It's a much more mellow composition compared to some of the other composers who feature a generally electronic style. There are a lot of interesting effects used, giving it a light atmosphere at times, but at the same time, there are some more dramatic effects used, which helps to counterbalance it nicely. If you are looking for a dedicated melody, however, I suggest you move on, as the melody is developed in more of a sporadic way.

There are also some composers who really surprised me with their contributions. Despite not carrying a lot of variety in terms of distinctive ethnic sounds that can be heard in today's music, Kenji Ito manages to create a distinctly Asian theme infused with some nice electronica. "Lazy Night" is probably one of Kenji Ito's more creative compositions in recent years. It's pretty catchy and seeing him use a more electronic sound rather than the orchestral themes you hear from him most of the time makes it a bit more on the interesting side.

Another surprising contributor is Yoko Shimomura. As with Kenji Ito, her contribution, "The Absolute Primitive," relies on a more electronic sound than most of her compositions these days. It features an interesting melody, but at times, it does seem like it drags on a bit. Fortunately, it offers a bit of variety in terms of atmosphere, featuring some more mysterious sections and some more dramatic sections. It's not a bad effort, but she's composed better.

Lastly, Michiko Naruke, of Wild Arms fame, also creates something a bit outside of her norm. Featuring a futuristic soundscape, much different than her Western style, "L.s." reminds me of something that SuperSweep would compose. It's got some jazzy sections that do remind me a bit of her Wild Arms work, but for the most part, the composition does a lot of things I wouldn't expect to hear from her. It's a great melody, something I think she's always been pretty good at, and it's a fun piece.

While I only mentioned a handful of the contributors, I found the album to be enjoyable overall. Even though there is a lack of distinctive sounds, given the limitation of the FM Sound Module, each composer was able to allay that given their unique styles. I also enjoy the fact that some composers moved out of their comfort zone to create something quite unique to their library of compositions. If you are a fan of the synth, you might want to pick this one up, but there are some compositions on the lackluster side.