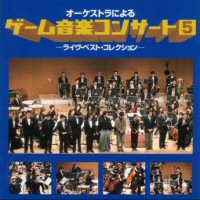 This is the last of the Game Music Concert ~The Best Selection~ series, and surprisingly, it's the weakest of the series. It's much shorter than the previous concerts, and there are no super-long, grand tracks to fully satisfy the listener's appetite. In addition, some of the tracks are more action-packed and less comforting in terms of listening experience. Not that there is nothing to enjoy in here, however. There are a whole lot of tasty treats packed within the twelve tracks, and the arrangement and performance quality is still first rate. Like the first four, this one takes familiar themes from various video games and gives them the big orchestral, symphonic treatment that they need. In addition, there are the pleasant surprises and unfamiliar titles that we have come to expect from listening to the previous versions.

Some of my favorite tracks are the ones that come from Nintendo games. Super Mario Yoshi's Island's "Yoshi's Athletic" is very lighthearted and humorous, with just the right touch of enthusiasm, allowing it to follow successfully in the footprints of the preceeding Mario titles. To me, it is really impressive to hear Koji Kondo's works given the orchestral treatment, because it pays great homage to the composer of some of the most popular games of all time, such as Super Mario and The Legend Of Zelda: A Link to the Past.

Another Nintendo favorite given the orchestral treatment is Donkey Kong Country, known in Japan as Super Donkey Kong. You have to hear for yourself. It's impressive to hear a jungle groove being played by an orchestra. The rest of the tune is a very gorgeous and relaxing arrangement of the water stage from the game. I never thought Donkey Kong Country could sound this great, so this track was another surprise for me.

The other two all-time favorite tracks of mine are the last ones, which come from Square. I had always dreamed about hearing Seiken Densetsu 3's music orchestrated (especially after hearing the excellent treatment of Seiken Densetsu 2 on Game Music Concert 3 ~The Best Selection~), and this was a dream come true. It's very grand and involving in composition and performance. It's also more lively and contains special cues from John Williams' Close Encounters Of The Third Kind. But the biggest treat of all is the last track, which is "Chrono Trigger"! For those of you who were disappointed with Chrono Trigger: The Brink Of Time, this is the treat for you. The orchestra plays the theme from Chrono Trigger the way it is meant to be heard — by symphony orchestra true and unadulterated. And the inclusion of Crono and Marle's love theme is very refreshing and nice, too.

The rest of the music comes from games that have never been released to America, all of which are similarly well done and performed. Yes, they are more action-oriented than most, but it is still grand to hear game music performed by an orchestra. In fact, some diehard Dragon Quest fans will be pleased to hear two arrangements of songs from Dragon Quest VI (which in my opinion, was a really grand effort for Sugiyama, and another one of my favorite soundtracks).