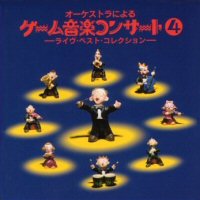 This is the fourth in the Game Music Concert ~The Best Selection~ series, yet it was the first of the Game Music Concert ~The Best Selection~ CDs I came to own. Personally, I didn't know what to expect when I got this album for Christmas, so I was really quite surprised and delighted. This is great stuff. I have so much to rave about this album, and I don't care if it takes up anybody's time. So beware of that as you read on.

One of the first highlights is a medley from Super Metroid: "Theme ~ Space Warrior Samus Aran's Theme ~ Big Boss BGM ~ Ending"! I didn't expect this to happen in Japan because the game there isn't exactly popular. That said, this suite is orchestrated and performed in the manner of a sci-fi epic movie score. Honestly, it took me a few minutes to realize that this was Super Metroid; I finally realized what it was when I heard the familiar songs from the game such as "Main Theme," "Brinstar," and "Crateria." (The liner notes don't even say that this is what the songs actually are — a minor flaw in the packaging department.) What's even more cool about it is the way it ends — a climactic finale with a long, satisfying chord from the instruments and a powerful tympani roll (my kind of idea for finales).

Stunt Race FX also took me by surprise. "What is a racing game with rock 'n roll (and country) music doing in a game music concert?" I thought for a moment. But then I threw that criticism in the trash can just as soon as I heard the music. It's cool! It's whimsical! It's bouncy! That's all I can say about it. Note also that occasionally there are some moments in the music when a car horn drops in and does a "BEEP-BEEP!" or two. Other than this, there is another rendition of the "Super Mario Brothers" medley. It is slower and less effective, but I'm not complaining.

I was thrilled to see that they had a piece from Dragon Quest II, too. At the time I received this CD on the Christmas of 1996, I had never heard any Dragon Quest music (although I did hear praising reviews). The track starts out quietly and softly, but then it becomes dark and furious and ends in a frightening climax. Actually, this tune may be recognizable to fans who have played Dragon Warrior II (the American name for Dragon Quest). If not, then this is a good first-time experience of music from another immensely popular series.

Wait just a minute, don't go away yet! I'm just getting to the best part! The finale is from Final Fantasy VI! At first, I thought it was going to be an arrangement of the totally awesome end title theme, but I was wrong. Instead, it's something even better. It's the opera sequence! There was a rendition of this sequence (well, the aria actually) on Final Fantasy VI: Grand Finale, but that version just pales in comparison to this one. This is the complete opera, with a finale written exclusively for the performance, running for nearly half an hour! The vocal performances are excellent, the arrangement is terrific, and it's truly a treat for Final Fantasy fans who have been dying to see an expansion of this pageant sequence from the game. And check out that moment where the orchestra literally falls apart at 16:46 for a few seconds, but then picks up again for another round at 16:58! That is one of the most awesome parts of this whole CD!

The other music on this album is from games I haven't even heard of. Renasu II, Itadaki Street 2, Uncharted Waters II, Night Of The Kamai, and finally Albert Odyssey 2. They are equally impressive and beautiful as well, with a couple exceptions. All told, Game Music Concert 4 ~The Best Selection~ is yet another must-own to anyone's game music collection.