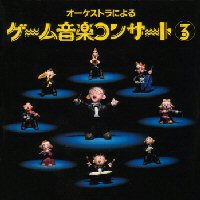 Here it is, ladies and gentlemen, the third entry in the ever popular Game Music Concert ~The Best Selection~ series! And I'm pleased to announce that it is everything that its two predecessors were, and then some. (These albums seem to get better and better as they go along!)

The first and biggest surprise on Game Music Concert 3 ~The Best Selection~ is a concert suite of "Theme of Star Fox"! This awesome, Star Wars style track sounds even better than the Super Nintendo synthesis since it's performed by orchestra. The arrangements are faithful to the original composition, the performance is terrific, and the ending is a hair grander than the original one. I don't know if there will ever be another treatment of Star Fox music performed by orchestra, so this one certainly demands listening to. The second highlight of this CD is "The Legend Of Zelda: Link's Awakening." This track begins with a lovely treatment of the classic Overworld theme, then it goes into the rollicking end title music, which contains not only the Overworld theme, but the theme of the Wind Fish (a lovely piece of music). These two themes jump back and forth between each other throughout the piece, and by the time it comes to a satisfying close, it only leaves us with a desire for more.

The other major highlight is an orchestrated treatment of Seiken Densetsu 2. The track chosen for the suite here is an absolutely ravishing orchestral treatment of the game's opening song, "Fear Of The Angels." Although short (it's only about three minutes long) and occasionally interspersed with a few embellishments, this track is an excellent arrangement of one of the loveliest songs to ever be written for any video game. In addition, there is another rendition of "Because I Love You" from EarthBound. The composition is identical to that of Game Music Concert 2 ~The Best Selection~, but the difference here is that it's somewhat less full in quality in terms of performance. However, this is not a big deal since the song is lovely to listen to. Like Game Music Concert 2 ~The Best Selection~, this title features some games that were never released in America, but these tracks are evenly balanced out with other tracks from games that were. Out of the rest of the tracks on this album, some of them are of particular note.

The tracks from Torneko's Great Adventure are very whimsical, yet classical sounding. The first of these two tracks has an interlude with pizzicato strings, similar to that of "Only Lonely Boy" from Dragon Quest II. The one track from Dragon Quest V is a battle track, and it's one of the more fast and furious ones in the series. It's very aggressive, with frantic chase interludes and some really furious percussion beatings. There's also a lovely, yet mournful, interlude packed away.

Also courtesy of Dragon Quest's Koichi Sugiyama, Hanjuku Hero is an extremely fast, lighthearted Scherzo, with slower, moody interludes showing up at brief moments. On that track is a very aggressive xylophone solo, which dominates the moments when the orchestra plays really fast. It's really great. (Incidentally, I happen to play the xylophone in my school band.) The last track, "Elfaria," starts off with a lovely piece of music, but the last half of the track is a surprisingly jazzy finale that would, at first, seem out of place with the classical sounding tracks on the album. However, after the first couple of seconds, it is easy to get used to, and it is a spectacular ending to the album.

The rest of the tracks I won't go into detail about, but make no mistake, all the music on this album is terrific. As with its predecessors, the performance is excellent, and the recording quality here sounds better than the first two. Whether it is lovely, relaxing music or furious action cues, Game Music Concert 3 ~The Best Selection~ is a truly unforgettable listening experience.