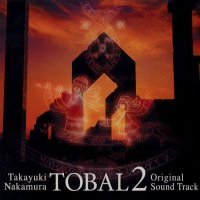 Tobal No. 1 was received with eight composers from the Square sound team. Variety was quite strong as many styles were employed, like Jazz, Tribal, New Age, Dance, etc... With Tobal No. 2, Square decided to let a composer from developer DreamFactory handle the music, which was former Sega veteran Takayuki Nakamura. Nakamura was blessed with having the opportunity to have worked on the first few Virtua Fighter games along with Takenobu Mitsuyoshi, as this experience was vital for Tobal 2's music creation and inspiration. For Tobal 2, Nakamura focused his compositions on three distinct styles: Jazz, Fusion and Rock. Was he able to surpass the 8 composers from the 1st Tobal? Let's find out.

The first track, aptly titled "Tobal 2," is a laidback gem. It starts with mechanical effects and soon strings and drums join, along with some stylish synth work, creating a rhythmical groove and lots of interesting cross-rhythms. The synthesized chorus adds to an already well-placed feeling of quality, which says a lot on the soundtrack overall. The next track, "Checkered career (Album Original Mix)," is even better. A strong bass builds up with drums and synth on the side, then the synth takes the lead with punchy jazz-influenced motifs and helps create the mood for warming up before battle. It all ends up with some impressive electric guitar work, which again defines the quality level of this score. "The Origin No. 5" begins with a quick organ/string intro before the synth, bass and drums start taking over. It moves on to more complex synth interplay, which renders the track so catchy and addictive.

"Beating Hard" has the perfect elements for a fusion track. The guitar intro is soon supported by synth and brass, providing just the right sound for representing duelling with others. The guitar starts to have a bit more action halfway through before the track ends with some smooth synth. "Hero's Looking Glass" also has a guitar intro, but this time the guitar and drums work together; more than halfway in, the riffs start coming in one after the other. "Knee Drop" is another example of a pure rock track; the guitar, drums and synth all work together and slowly bring the theme to a climax, in which Nakamura displays even more impressive guitar mastery. It is by far the 'hardest' track on the disc.

Moving briskly on, "Tobal 2 1st Ending" is a slow-paced rock ballad. It features some occasionally enticing riffs yet remains fairly quiet compared to other tracks, but also offers a feeling of accomplishment, as any ending theme should do. The 2nd Ending works in conjunction with the previous track and adds some jazz elements; the strings do their part in creating the feel of calmness and victory while the synth takes care of the rest.

While Tobal 2 may seem less interesting to those not fond of Jazz, Fusion, or Rock, everybody else will be able to enjoy the stylistic focus. Like the early Virtua Fighter soundtracks, Takayuki Nakamura aims to show some impressive use of instruments, as well as writing strong and exciting fighting themes. I can safely say he has succeeded in Tobal 2.

Album was composed by Такаюки Накамура and was released on April 21, 1997. Soundtrack consists of tracks with duration over more than hour. Album was released by DigiCube.