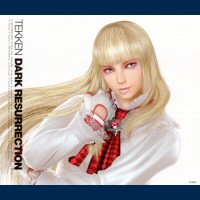 Oh, how the mighty have fallen. Or, should I say, "Oh, how the mighty have tripped, sprained an ankle, and limped along for the duration of two 74 minute long compact discs". After the steady Tekken Tag Tournament and the stellar Tekken 4, the Tekken 5 & Dark Resurrection Original Soundtrack stops short of its full potential, leaving two very full discs sounding very empty. An unprecedented seventeen composers, all from Namco's sound team, are credited for the work; it's just a shame that these great musicians somehow came together to put out what I'd consider to be their most disappointing collective work to date.

In an admittedly cool move on Namco's behalf, Tekken 5 and DR are basically two halves of the same album; most of Tekken 5's stage themes are arranged for Dark Resurrection's soundtrack, which makes the double-disc package both an original soundtrack and an arrange album. In theory, that's pretty awesome, but the finished product falls way shy of what it could (and should) have been. If I sound a little bitter it's because I am. I enjoyed Tekken Tag Tournament and Tekken 4 a whole lot, so I was expecting Tekken 5 to hold its own as both a stand-alone album and as a continuation of the series' great music, especially since most of the same composers were involved; man, was I wrong.

The premonitory vocal theme, "Sparking", sets the tone for the direction of a good portion of the album: songs full of generic guitar licks and a somewhat gritty vibe influenced by the mediocre dirge of America's rock and nu-metal scene. Ick. "Dragon's Nest ~To Those Who Go to Heaven~" follows suit and has some unfortunate similarities to "Sparking". The mood continues through the disc with themes like the forced "Crimson Sunset", the misleading "Ground Zero Funk" (more like "Inspiration Zero Rock"), and the dingy club, throw-your-hands-in-the-air anthem of "Give Me Your Name". But that's not all! The lack of inspiration flows into other genres, as shown in the boring electronica of "Unforgiven" or how "Antares" sounds like a watered-down Castlevania arrangement, complete with a techno beat and organ accompaniment. Even Yu Miyake seems bored, bringing the lifeless "Red Hot Fist" and the repetitive (even by his standards) "Orbital Move".

It's a shame that 33 of the album's 59 tracks are dedicated to the character's ending themes. It's times like this when "complete" doesn't necessarily mean "better". The ending collection for Tekken 5 is almost entirely superfluous, barring a few knockouts like Hiroshi Okubo's "Paul", Miyake's invigorating and fresh techno piece "Raven", and both of Xiaoyu's ending themes. That leaves about twenty five themes that will clutter up your MP3 library like you would not believe.

Luckily, the entire disc isn't a total wash. Akitaka Toyama single-handedly gives the disc solid ground to stand on with his rhythmic and developed "Formless Like Water", as well as the aggressive but beautiful techno of "Gold Rush". Tetsukazu Nakanishi's "Mode Select" sounds like a remix of one of Ace Combat's Hangar themes (that's a good thing) while the lively trance of Okubo's "Poolside" brings the album some much needed — and not forced — positive energy. It's just too bad that more of the other composers couldn't follow suit.

On the kind-of bright side, Dark Resurrection fares better than Tekken 5's soundtrack thanks to some new themes and some solid arrangements of the mostly mediocre (or worse) stage themes from Tekken 5. Some will sound familiar, like DJ MOTIVE's faithful rendition of Toyama's "Formless Like Water", but others are quite different, like how Hiroshi Watanabe takes Toyama's "Gold Rush" and transforms it into the gorgeous pseudo-New Age techno of "Tiamat". Riow Arai materializes out of the ether to arrange "Moonlit Wilderness" and "Poolside" into two practically unrecognizable but enjoyable abstract electronic pieces. Now you can stop asking "Whatever happened to that dude that wrote Front Mission Alternative?", because apparently this is it, at least in the game music scene.

While some of the arrangements are solid, the real treats of the disc are the new pieces, though. The disco funk of "Disco Bowl" has a similar effect on the disc as "Poolside" had on Tekken 5's soundtrack. Masaru Shiina's trifecta of dojo themes on the latter half of the disc bring some welcome Eastern Influence to the album. Luckily there are only three ending themes on Dark Resurrection's disc (all easily skippable) before we hit several new themes, like the epic rock of the "Hall of Fame" tracks and the breakbeat synthetic symphony of "Martial Symphony Opus 5". It's a great way to end a not so great soundtrack set.

I dig Tekken music a lot, and I hold the NGBI sound team in high regards as a collective union of game music composition superheroes, so it pains me to be so negative toward an album written by some of my favorite composers, but that's how I feel. My boys let me down big time with the Tekken 5 & Dark Resurrection Original Soundtrack. Despite there being a hefty handful of great tracks scattered about, mostly by Toyama and Okubo, I can't recommend this double-disc set even half-heartedly. You may walk away from the experience with more than I did, so don't be discouraged by my verbalization of my disappoint. I just hope that if you choose to check the album out you will do so with caution. Here's hoping that Tekken 6 returns to form and doesn't disappoint in the way that Tekken 5 and Dark Resurrection did. Come on, Namco... I know you have it in you! 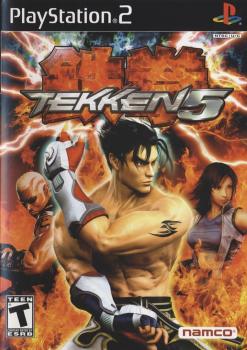