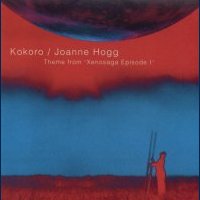 "Kokoro” is the single from the Xenosaga Episode I soundtrack, and is sung by Joanne Hogg. Interestingly, the single doesn't begin with the song, but with another vocal theme called "Pain".

"Pain" is a song that follows the thoughts of the main character and, sung in English, has a quiet verse and a huge stomping chorus. The piano is present throughout and holds the main tune, while Joanne's voice soars throughout, especially in the chorus where key changes are present throughout. The song has an epic feel to it that's especially present in the instrumental verse played by a solitary whistle. It's a complex but very satisfying listen.

"Kokoro", the ending theme for Xenosaga Episode I is the second vocal track on the single. Opening with acoustic guitar arpeggios, instruments are layered constantly on top of each other to make listening especially enjoyable. Upon each listen, you'll find a new part of the song that you hadn't noticed last time. The way in which the different duel vocal arrangements (as in "Pain" too) are done sets Joanne Hogg's vocals apart from the crowd. The whole song is a classic from start to finish, and I guarantee that you'll be pressing the repeat button when it's done.

Track 3 is a piano version of "Kokoro". The version is slow and heartfelt, preferring to use sparse arrangement to make more emphasis on the emotions than make a powerful finger-numbing piece. It works very well indeed. Tracks 4 and 5 are instrumental versions of "Pain" and "Kokoro" which are faultless and with lyrics provided to sing along with too!

I highly recommend the single if you don't intend to buy the soundtrack. With so much talent for such a small price, you'd be mad to miss it!

In response to the success of Xenogears' ballads sung by Joanne Hogg, Yasunori Mitsuda brought back the singer to create two more Celtic-tinged ballads, "Pain" and "Kokoro," for Xenosaga Episode I. Her return was bittersweet. On the one hand, it was exactly what most fans wanted; having been touched by the Iona singer's soothing voice in "Small Two of Pieces" and "Stars on Tears," many eagerly anticipated hearing two more songs featuring her. On the other, it was detrimental to the originality of the Xenosaga soundtrack as a whole, undermining the score's experimental leanings and otherwise epic nature. That was because Mitsuda adopted the poptastic commercialistic approach to songwriting...

Since he is a composer who has usually shown the ability to self-reflect, conduct experiments, and continually refine his work in the past, many found it highly distressing that Yasunori Mitsuda favoured commerce above art when creating the ballads for Xenosaga Episode I. Transferring the style, form, instrumentation, and atmosphere from one song to another is an easy process that secured the success of many '90s boybands before they eventually ran out of steam and were thankfully never heard from again (edit - I wrote this before Take That tragically got back together); it's easy to see that musical recycling is a tempting and successful approach when it comes to creating popular songs for pseudo-musicians. As a composer who felt his incredibly popular Chrono Trigger works were infantile, produced three radical and sometimes hated arranged albums for the sake of experimentation, and broke away from Square to seek more musical freedom, never once did the composer succomb to pressure from fans to lower his musical integrity. Here is a nasty but enjoyable exception. These tracks are carbon copies of previous works right down to Davy Spillane on low whistle and Hidenobu Ootsuki on drums.

With regards to "Pain," while the lyrics are infamously bad and these vocals are overemphasised for much of the track, the softness and tenderness of Hogg's voice adds a lot of emotional value throughout and brings the most out of Mitsuda's firmly etched melodies. The ensemble used is practically identical to similar tracks, though remains strong throughout as a result of the way each instrument is used. Yasuharu Nakanishi provides a suitably soft piano introduction, for example, and synchronises well with Davy Spillane who briefly joins him with a colourful flourish on the low whistle. Tomohiko Kira's versatile guitar use also stands out and he successfully bridges the gap between the American pop styles and Celtic folk styles fused convincingly within the track. His solo in the latter part of the track effortlessly leads into Spillane's second low whistle solo, which ends the track is such a stunning manner. This track is a lot of things — soft, memorable, enjoyable, appropriate — yet original or progressive is not one of them.

"Kokoro" (aka "Small Two of Pieces #4," aka "Yet Another Clichéd Love Ballad," aka "Sentimental Drivel Here We Come!") is the supposed highlight of the single, but isn't quite as successful as the other. It shares similar positive features to "Pain" — Hogg's tender vocal use, Mitsuda's strong melodies, Kira's resourceful electric and acoustic guitar use, as well as Spillane's well projected low whistle and Uillean pipe passages — and is therefore quite enjoyable. A lot of this enjoyment is skindeep, however, and the track suffers deeply from its thoughtless lyrics, which are even worse than "Eyes on Me," as well as an unoriginal ensemble, which has a much more prominent negative effect than in "Pain". The melody, though the main theme of Xenosaga Episode I, is treated poorly and sounds very shallow and run-of-the-mill here. "Kokoro" doesn't have an ounce of musical integrity, but will appeal to the audience this single and its components were mass-produced for.

The instrumental tracks are unremarkable. The two karaoke themes are just "Kokoro" and "Pain" without the vocals, beautifully exposed in their redundancy and blandness for critics to savage. "Kokoro Piano Version" is identical to the one minute track that concludes Disc Two of the Xenosaga Original Soundtrack. Apparently, creating a proper piano rendition would have taken too much time or given the single an original source of appeal...

"Pain" and "Kokoro" are pleasant, but ultimately unremarkable. Buy this single if you enjoy banality, '90s boybands, and generic low whistle solos. Buy the Xenosaga Episode I soundtrack if you like real music as well; this features the two vocal singles, the piano version, and tonnes of great instrumental tracks, and is better than a single that didn't deserve releasing. Yasunori, how could you? Did that savage bankrupt animal DigiCube put you up to this?

Album was composed by Ясунори Мицуда and was released on February 06, 2002. Soundtrack consists of tracks with duration over about 25 minutes. Album was released by DigiCube. 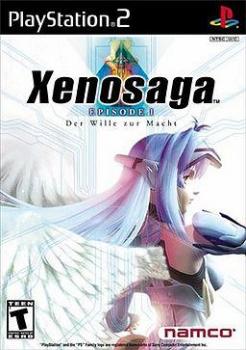