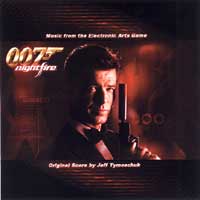 I honestly don't remember much about James Bond 007: Nightfire. I seem to remember some car chases, a trippy theme song, and some girl falling out of a skyscraper, but that's about it. Perhaps one of the reasons the instrumental music didn't stick out, unlike previous entries in the series, was that it mostly featured film emulations rather than individual expressions. Jeff Tymoschuk's soundtrack was released for promotional purposes at the same time as the game.

The soundtrack for James Bond 007: Nightfire opens with a rendition of the series' main theme, "Paris By Helicopter". Following a cinematic introduction, Jeff Tymoschuk offers a straightforward rendition of the Monty Norman classic. However, the production values are much more impressive than its past video game adaptations, with the bellowing brass and slapped bass standing out as they should do. Overall, this iconic track is a suitable introduction to the score and demonstrates the series' games at last attaining filmic production values. The demo track at the end of the soundtrack also features an even more linear interpretation of the theme.

Tymoschuk does tend to labour this theme when portraying the title character. The theme is incorporated in most other tracks on the soundtrack in a range of forms, from the chromatic chord progressions of "Escape from Drake's Castle", to the interludes of "Jungle Assault", to the climactic moments of "Rescuing Nightshade". Most appearances are appropriate in the game and supplement already established cinematic cues and racing tracks. However, it's disappointing that Tymoschuk wasn't permitted to offer novel melodic material here, like David Arnold has in the film scores. Like James Bond 007: Tomorrow Never Dies before it, these numerous arrangements starve the soundtrack of originality and give quite a repetitive quality.

Despite its largely consistent sound, there are some more interesting tracks on the soundtrack. Interestingly, "Enemies Vanquished" goes quite a bit further by subtly incorporating motifs from other film scores, notably Paul McCartney's "Live and Let Die" and John Barry's "On Her Majesty's Secret Service", within a range of original action-packed orchestrations. Another major highlight on the soundtrack is "Ignore That Sinking Feeling", which provides the desired feeling of infiltration in the game with its eerie soundscaping before expanding into an intense action-packed anthem. "Jungle Assault" is also a refreshing deviation from the mostly orchestral sound with its funky guitar riffs and exotic infusions.

While not present on the promotional release, the game's aforementioned theme song "Nearly Civilized" is particularly interesting. Appropriate for accompanying the silhouette images of the title sequence, the song features the typical alluring melodies and lyrics of the film series' theme songs. However, the accompaniment is quite a bit different with its various exotic and electronic tinges. Despite its creative intentions, the verse doesn't come together well and lines such as "Don't love me quietly" sound particularly out-of-place. Fortunately, the chorus is quite enjoyable and brings out the most of Esthero's ethereal voice.

Overall, the James Bond 007: Nightfire soundtrack successfully emulates the tones of the series' film scores with its thematic references, action-packed orchestrations, and high production values. However, it is too lacking in original themes and stylings to be anything more than an inferior emulation of David Arnold's scores. What's more, at 30 minutes long, it is disappointingly brief as well. While the soundtrack features some impressive music, it didn't deserve a wider release.

Contains poritions of "The James Bond Theme" written by Monty Norman.
Arranged and performed by Jeff Tymoschuk.
Produced by Jennifer Lewis and Jeff Tymoschuk.
Mixed by Francols Lafl?ur.
Album was composed by Джефф Тимощук and was released on 2002. Soundtrack consists of tracks with duration over about 35 minutes. Album was released by Electronic Arts.