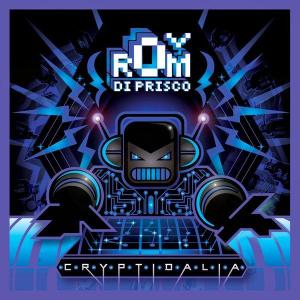 Having achieved recognition for his compositions to the Need For Speed and Unreal Tournament series, music producer Rom Di Prisco decided it was time to release his first original album in 2010. The result is Cryptidalia, an abstractly titled and styled album featuring ten contrasting electronic tracks and a cover inspired by the 1980s. While the album didn't receive much press at the time of its release, it deserves to be in the collections of every electronic music fan. After all, it isn't just excellent, but also completely free...

Rom Di Prisco opens the album strongly with "Troposphere". The main feature of the composition is the contrast between soothing and energetic elements, provided by the gliding melody line and the pulsating backing beats respectively. Such dichotomy is hardly a novel feature in electronic music, but Di Prisco's clean implementation and subtle layering ensures the final effect is highly affecting. On first listen, the composition might come across rather simple or even bland, but repeated listens prove far more satisfying. Perhaps inspired by hardship, the track somehow manages to heal a listener's pain and stimulate them to keep going. The track has all the elements needed to be easy background listening, but it's also creative enough to inspire the minds of musicians, techies, and dreamers alike...

Among the more downbeat tracks, "Codex" and "Zenermancy" really emphasise the mature production values of the entire album. Both hybridise acoustic performances by Di Prisco himself with electronic synth programmed from the ground up. All the elements are mixed beautifully and the sound quality is excellent. The latter is especially beautiful with its jazzy piano riffs and the reverb always enhances the atmosphere without becoming foggy. Perhaps Di Prisco's answer to Tron, "Vector" incorporates further electro-acoustic soundscaping to convey a journey into a new dimension. The acoustic guitar riffs capture the personal element of the composition, while a detailed array of electronic beats and synth parts increasingly portray a new futuristic environment. The dash of chiptune elements also give a hint of what to expect from his mini-album Izometriik.

Di Prisco often delves into dark uncharted territories on Cryptidalia, but rarely loses listeners along the way. Were "Caverns of Suursonnabu" featured in an RPG, it'd be the most interesting — and effective — cave theme ever. On the surface, there's no hummable melody or warm soundscapes here, just seven minutes of dark ambience. But on deeper inspection, the track is astounding for its complex polyrhythms and abstract synthesis, particularly the various percussion parts. The final result sounds especially good on a surround sound system. "Dekontaminaat" meanwhile focuses on industrial elements and hard beats throughout its relatively brief appearance. While many electronic music producers alienate their audience with such elements, Di Prisco somehow manages to draw listeners further in. Whether it's the compelling rhythms, lyrical touches, or the retro elements, something about this track has an immersive effect.

The release features several other centrepieces. "Gamma Velorum" sustains its momentous eight minute playtime with its shifts between warped sections featuring distorted electronic beats and anthemic climaxes dominated by soulful guitar melodies. Thanks to a combination of excellent musicality and implementation, the shifts prove striking without ever sounding jarring or tangential. The conceptually related "Delta Velorum" closes the album on an understated and open-ended manner, encouraging another whizz through the media player. Nevertheless, the preceding "Subatomic Shifter" ensures the album comes together as a meaningful whole. Di Prisco hybridises styles and motifs featured elsewhere in the album in an ingenious way, while incorporating enough novel ideas to ensure the track also stands up in its own right. Once again, it's very conceptual and manages to be both personal yet cryptic.

Many musicians stumble on their debut album, but this is not the case for Rom Di Prisco. His extensive experience and years of planning helped to ensure his own long-awaited debut was a rich, imaginative, and polished work. Simply put, Cryptidalia is a humble masterpiece.

За наводку благодарности уходят к Flamberg....
Показать
22.12.2010    2049
Album was composed by Ром ди Приско and was released on December 09, 2010. Soundtrack consists of 10 tracks tracks with duration over more than hour.

Sounds like Ambient, Electronica - that's what we can say about this album. Notice, Bandcamp gives you opportunity to freely listen to this album. Absolutely legal. Without violations.