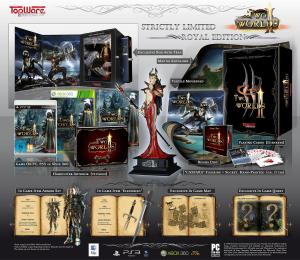 Two Worlds II was a vastly improved sequel to Reality Pump's fantasy RPG. The developer decided to change composers for the title from old-school film veteran Harold Faltermeyer to relative newcomer Borislav Slavov (aka Bobby Glorian). Having worked on soundtracks such as Knights of Honor and Gothic 3, Slavov was a good choice to portray the game's scenes in a fitting way. However, the music is considerably less enjoyable on a stand-alone level, despite being included on a DVD featuring with the limited edition version of the game.

The soundtrack begins with the game's main theme. This track is in line with Harold Faltermeyer's score for the original game, blending dark string elements with a heroic brass melody. However, the fantasy orchestration is somewhat richer and the production values are higher, ensuring a genuinely immersive effect in the game. A particularly impressive element is the occasional use of chorus to accentuate the mood. That said, the track sounds more like a Howard Shore rip-off, than a courageous display of individuality like its predecessor, and could have been thematically stronger too. Like so many tracks on this album, it fits the game but is potentially underwhelming otherwise.

Slavov's strengths of using folk and ethnic instruments are well-reflected on this soundtrack. "The Golden Cliff", in particular, establishes a peaceful country setting with its acoustic guitar focus. While understated, the guitar work establishes just the right feel in the game and the live performance brings a considerable amount to the track. "Heart of The Wild" is a setting piece that, through its exotic use of woodwinds and other instruments, fully describes a beautiful yet dangerous forest. But perhaps the most beautiful track of all is "Lands of The Despair", a slow gushing theme featuring excellent strings use. Amidst so many ambient scene-setters, this track is one of the few with stand-alone value.

With its wailing panflutes, "A Far East Dream" is an authentic example of world music composition and reflects Slavov's detailed studies in ethnomusicology, but may disinterest stand-alone listeners. Those looking for something a little more exciting can also experience Slavov's use of Middle Eastern instruments and tonalities in "Trail of Hatmandor" and "Desert Traces", which both complement the scenery and serve as a decent listening too. At the end of the DVD soundtrack, listeners can also hear multiple experiments in folk music to portray the game's taverns. These themes aren't up there with those on World of Warcraft, but they still work pretty well in the game.

In addition to the various setting themes, the soundtrack is crammed with multiple suspense tracks. While most of these sound rather empty, "Grave March" is a very thrilling track that uses chorus, organ, and percussion to give a classic horror feeling, while "Haunted Grounds" is also a suspenseful track that focuses on low-pitched piano rumblings. "Ad Mortem" and "Under Canvas" are unfortunately the only action oriented scores in the entire soundtrack. The former is a heroic track, in which the brass does a good job of lifting the vocals and strings, while "Under Canvas" achieves similar emotions using somewhat contrasting elements. The stand-alone soundtrack would have benefited more tracks like these to break up the experience.

Like its predecessor, the Two Worlds II soundtrack also includes a few lyricised songs. "Little Teardrop" seems suitable as a bar-type song, combining a charismatic voice with piano, electric guitars, and drums. It's a welcome novelty in an otherwise understated soundtrack. "Two Worlds II Rock and Vocal Theme" does justice to the popular genre while portraying the imagery of the game. The female lead is an excellent fit here and the lyrical content gives a pleasant if clichéd message: "Never miss a chance to fly, once again free your mind". The end of the soundtrack also includes emotional reprises of the main theme from the game with a more personal emphasis. Sadly, a few notable themes, including "Coming Home", "Advent Calendar", and a variation of the main theme, don't make it on to the official release.

Two Worlds II is an example of low-key game scoring. The music generally fits and sometimes enhances the atmosphere and scenery of the game, but is very rarely interesting on a stand-alone basis. The majority of the tracks on this release are ambient ethnic/folk music tracks or empty-sounding suspense tracks. Those expecting rich soundscapes and memorable melodies like the original, if often out-of-place, Two Worlds will therefore be disappointed. It's a great soundtrack in context, though the soundtrack featured on the limited edition's DVD won't have a wide appeal on a stand-alone level.

Ознакомиться с рецензией....
Показать
08.03.2011    1869
Album was composed by Борислав Славов / Виктор Стоянов and was released on November 09, 2010. Soundtrack consists of 40 tracks tracks with duration over more than hour. Album was released by SouthPeak Games. 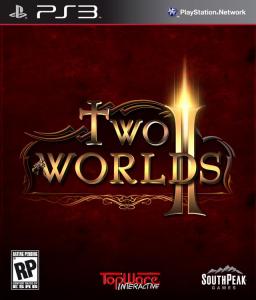 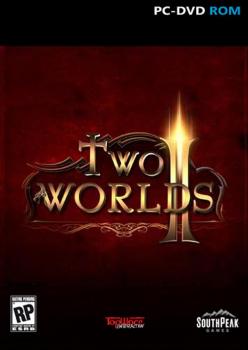 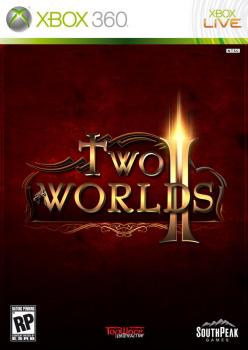 Two Worlds II: Echoes of the Dark Past OST • 2017
Digital