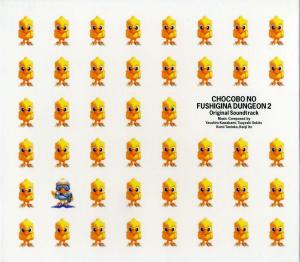 The Final Fantasy series' success made Square viable, but has often undermined the company's reputability. Even those that loved the numbered instalments to the series often can't help but shudder when the near-endless line of cheap spinoff or misnamed products that have undermined the intelligence and pockets of consumers. Likely their most transparent and unnecessary first wave of efforts were the long line of Chocobo spin-offs; though only Chocobo Racing and Chocobo's Mysterious Dungeon 2 made it overseas, most additions to the series were despised by Japanese gamers and Square won neither critical acclaim nor commercial success with these half-hearted efforts with unlikely protagonists. Musically, the games were effectively accompanied by light soundtracks that featured copious amounts of the "Chocobo" theme in addition to a mixture of other reprises and original compositions. Despite its contributors being prolific and fairly respected musicians, there were limited by the atmosphere of the games, the need to reuse the one-dimensional "Chocobo" theme, and the overall shallowness of the projects they had to create music for. Attempts at creativity received mixed reactions and several of the series' scores didn't receive album releases at all. The Chocobo's Mysterious Dungeon 2 Original Soundtrack, composed by Kumi Tanioka, Yasuhiro Kawakami, Tsuyoshi Sekito, and Kenji Ito, took a traditional light-hearted cutesy acoustic approach with a few anomalies here and there. Was this approach to aid accessibility or ultimately create one of the blandest additions to Square's discography?

Kenji Ito is the score's most well-known contributor and created five cinematic contributions here that thankfully contrast to his controversial work on Chocobo Racing. "Prelude ~Premonition of a New Journey~" is a very good full-orchestral introduction to the soundtrack; probably Ito's most mature symphonic work up to 1999, it is based entirely on the Chocobo theme and written in the spirit of Masashi Hamauzu's "Prelude" from the prequel's soundtrack, it's dramatic, unpredictable, and brooding in sections, but made light overall by an underlying jazz basis, lots of slapstick progressions, novelty percussion and sound effects, and, of course, the Chocobo theme itself. It's all the way until the 36th track, "Charge!!", that he makes his second appearance; the vibrant orchestration and driving snare drums of this march give rise to a fantastic trumpet solo at its apex in one of Ito's most emotional creations. "March de Chocobo" is a brief recapitulation of the Chocobo theme; again powerfully orchestrated, it is initially jubilant and brass-led but transitions into a piano-supported slow section to end the soundtrack. Similarly impressive are the two promotional themes — "TVCM part1" is an interpretation of the Chocobo theme for piano and orchestra while "TVCM part2" is very similar to "Charge!!". While his contributions are few, Kenji Ito certainly adds emotion and maturity to the opening and ending of the soundtrack.

Yasuhiro Kawakami's twelve additions encompass a range of emotions and are quite memorable. "Time of Sorrow" features a soft electronic piano melody supported by functional strings while "Cid's Theme" is a humorous march carried by lyricism and momentum. "Shiroma's Theme" reminds me of certain mellow Final Fantasy themes with its wistful flute line; initially supported solely by piano, the theme blooms in its orchestral chorus and is especially powerful in its brief concluding reprise, "Meeting Shiroma Again". Perhaps Kawakami was inspired by Final Fantasy IV's "Theme of Love" while constructing the theme; he was, after all, assigned to create two simple arrangements of the theme for solo piano and piano and strings. Another piece with multiple arrangements is the pleasant but unremarkable "Monster Village" — serene and flute-led in its initial version, upbeat and piano-supported in its second version, and whimsical and dance-like in its final version. "Dungeon Discovered!!" is a bouncy gem featuring a simple but memorable melody supported by clarinet punctuation. As opposed to using it as a one-time ditty suitable for a light-hearted score, Kawakami treats it as a major recurring theme. This results in some cringe-worthy moments. The slow rendition in "The Journey Continues" does not work from the outset, simply because it uses a melody intended to be happy and bouncy, and, once the suspended strings are added, the effort really stinks of cheese. "Staff Roll" is just the original with few instrument adjustments from synthesizer operator Ryo Yamazaki. Though its lack of originality is well-disguised, the fact that this one minute reprise is one of the game's ending themes certainly raised my eyebrow.

Kumi Tanioka's relatively large number of contributions maintain the light-hearted simplistic feel of the soundtrack. "Story of the Bottom of the Sea", "Whisper of Time", and "Chant of Truth" all adopt minimalistic harp-based constructs but convey cantabile tones once developed. From pizzicato strings and tuned percussion motifs, repeated anticedent and consequent woodwind phrases in "Searching for Treasure!" give a sense of frivolously setting off in an old RPG cliché. Other light-hearted contributions included the oh so hummable "Mechanical World" and Old Man Cid's Castle", a buoyant rendition of the Moogle theme, and an original and quite catchy Fat Chocobo theme. Darker works include "I'm Not Afraid", which gives way to a dissonant interpretation of the Chocobo theme following a lengthy chord and percussion introduction, "Phantom Dimension", featuring a striking selection of arpeggiated chords, and "Time of Trial", an excellent contribution clearly inspired by Final Fantasy last dungeon themes. Towards the end of the soundtrack, she reflects some individualism with plodding piano use of the Christmassy "Lots of Interesting Things", a minor twist on the Chocobo theme in "Kyaa!", and some serene soundscaping in "Snow Field". It's a pleasant debut for Tanioka but somehow feels timeworn with its insistence on emulating characteristic features of light and dark RPG pieces.

Many of Tsuyoshi Sekito's contributions are reminiscent of his work on Brave Fencer Musashi. "Skull Hammer" and "Imp Robo Boss" both feature haunting orchestral passages obsessed with diminished chord progressions, but are delightfully characterised with their respective uses of exuberant synth vocals and a light rock-infused bass line. The battle theme for Final Fantasy VI's comic relief "Ultros" is treated with an Arabian style, which helps to individualise a melodically deficient work. The battle themes for the three incarnations of Glasgos are better efforts. "Glasgos" wonderful metamorphoses through tense, motivating, sinister, and epic sections in what I consider Sekito's finest orchestral work to date. As for the final battle theme "GlasgosX ~ GlasgosZ", it again achieves a great deal over its 1:35 playtime (there isn't a complete loop). It carefully transitions from a section moulded in a similar way to "Skull Hammer" to a soaring and encouraging rendition of the Chocobo theme against, of course, more of Sekito's trademark synth vocals to represent the antagonist. Most of his other works are intrinsically simple, such as "Mysterious Corridor" with its atmospheric suspended notes and ascending harp arpeggios, or "Wind of an Undiscovered Region", another example of ambient soundscaping with held notes. He is also responsible for a series of brief but effective event themes — "Enter! Cid Tank", "Strongest Impact", "The Last Prelude", and "Illusion Destruction" — that reuse several themes elsewhere on the soundtrack.

The Chocobo's Mysterious Dungeon 2 Original Soundtrack is a decent effort from Square. Each of its contributors did very well offering something unique to the score and, while Kawakami and Tanioka produced a lot of simple unmemorable material, Sekito and Ito produce some absolutely excellent contributions. Of course, analysis of each composer separately raises the question of how well the soundtrack comes together overall. It's a coherent and thorough work that appeals on a stand-alone basis by establishing an effective dramatic arch. More importantly, it also works comfortably and endearingly within the light-hearted framework of the game. Despite the lack of quintessentially bad material, this soundtrack does contain a lot of themes limited thematically and emotionally, so I have difficulty recommending it to a wide audience. It can be safely skipped by most but will be moderately enjoyed by Square aficionados. 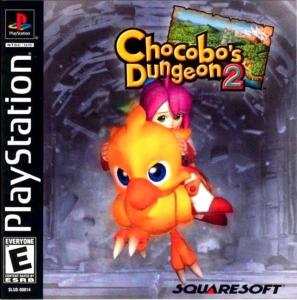