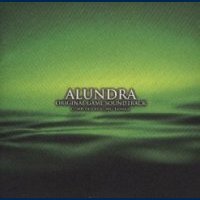 Alundra is one of those gems in the RPG world and featured beautifully rendered graphics, a challenging gameplay, and a well-paced storyline for its time. As the eponymous character the player travels through dreams and nightmares of the games NPCs, while the gameplay has its own twist influenced by Langrisser and Zelda. The music is one of the highlights of the game and, as expected from its composer Kohei Tanaka, he provides a diverse score rich with instrumentation and melody. It should be said that the collection on the CD is not complete, notably lacking fanfare tracks, Melza's theme, and the localised opening and ending themes. Nevertheless, the offerings here are of impressive quality.

The soundtrack kicks off with a bang with the game's opening theme, "Alundra", which acts as the background music to the Japanese montage movie and the title theme. It is beautifully put together with main melodies in elevating brass, accompanied with piano, castanets, and guitar. "The Village of Inoa" is the game's main town theme and mostly features percussive sound effects and peaceful progressive rhythms. Following is the field map theme, "The Wind that Spans the Earth", another track follows RPG tradition; this track is my favourite area theme that elaborates on the main theme, with its epic variation, and contains the highlights of Tanaka's militant oeuvre.

The soundtrack gradually becomes darker as it progresses towards its climax. I find it interesting how Tanaka includes a series of unusual sound effects into some of the tracks to add to the atmosphere, such as the screams in "Nightmare". Focusing more on "Nightmare", this track certainly lives up to its name, as it serves as a dungeon theme while exploring people's nightmares in the game. Aside from the scream sound effects, it mostly features techno beats that create a suitable dynamic and mood. Also of mention is "The Holy Demon Shrine, Arisen", an ethereal piano-led track that progressively gets darker throughout its duration.

The boss themes collate at the end of the soundtrack, the first being "Insane Black Angel, Attack". The midboss theme is tense throughout, though it suffers from not having distinctive melodies, thus is easily forgotten. The build up of the boss themes climaxes with "Spirit Parasite Melzas", the game's last battle music. Tanaka delivers well with this track; it starts with a trumpet and organ motif that introduces the main melody before exploding into a series of beeping noises, percussive beats, bells and chimes, strings and chorals. The beeping segment repeats, and plays a string section that introduces the main theme of Alundra, building up to a heroic finale before looping to the organ segment; a climax worth waiting for.

The soundtrack then closes beautifully and startlingly, with the fully orchestrated "Ending". Having not completed the game, this track was a surprise for me when I first heard it. It is a medley of some of the main highlights in the game — including Inoa, Black Angel, Melza, and naturally the main theme — and it's a wonderfully arranged one at that. Tanaka finishes with "Tears", sung by Aya Yamada. Despite the title, it is catchy and upbeat, and overall proves an enjoyable J-Pop track. The localised version of the game had an English dub of this track and, like the American opening theme, this is not included on the soundtrack.

A rewarding listen, Alundra is rich in its textures and its instrumentation. If you are a fan of Mitsuda, Uematsu, and Naruke then you will love this soundtrack. Tanaka encapsulates wonderful layers of harmony in this music, where you have a mixture of militant, heroic, ethnic, suspenseful and encompassing themes that make this soundtrack part of any collection.

Album was composed by Кохэй Танака and was released on May 21, 1997. Soundtrack consists of tracks with duration over more than hour. Album was released by Antinos Records.