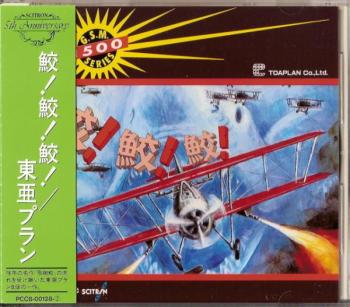 The Toaplan Collector's Box was one of several compilations released to celebrate Scitron's fifth anniversary in 1993. It reprints five of their albums into a single box, Dogyuun!!, Truxton II, Vimana & Teki Paki, Fire Shark, and Zero Wing. It covered many of the highlights of Toaplan's discography for an accessible price.

The first disc of the album is dedicated to one of Toaplan's lower-profile releases, 1992's Dogyuun!!, composed by Tatsuya Uemura. It features the original arcade tracks and a bonus arrange version "Dogyuun Magic" offers an upbeat mood with an Asian influence. Uemura offers some intricate rhythms, though it's the overall progressive rock nature of the track that really manages to capture the attention of this listener. Uemura to provide a synth melody that works well with the groovy accompaniment. For the album release, he also created a special arrangement that greatly elaborates on these stylistic origins. It's a treat for Toaplan fans.

"Power On" offers some great rhythms and a pretty decent melody at the same time. There is a definite celebratory tone in the track, but at the same time, I love the mellow passages that contrast nicely with the more invigorating aspects of the track. "High Speed Queen" offers an interesting combination of upbeat melodies with some slower tempo sections that help give it a bit of mystery. Overall, it's quite an intriguing track with some great rhythms and a serviceable melody as well.

As the name suggests, "Onmoroid Boogie" has a very funky atmosphere with a bit of progressive rock flair. The B section offers quite a fun synthesizer melody that really works well at capturing a lot of energy. Lastly, "Gamushalism" has a very industrial soundscape to it, thanks to the mechanical rhythms and futuristic accompaniments. The actual melody itself is a bit more mysterious sounding, but still adopts a sort of a progressive rock tone; however, I feel it's one of the weaker themes on the soundtrack. "Theme of Boss" develops quite nicely, given the genre. It has a sinister tone, but at the same time, it offers some amazing rhythms and a pretty catchy melody as well. It's definitely one of the more successful boss themes on the album. The disc closes with a sound effects collection.

The second disc of the album is dedicated to 1992's Truxton II, released as Tatsujinou in Japan. Masahiro Yuge's soundtrack featured a much brighter atmosphere than most of Toaplan's previous works. The first stage theme "Live in Future" has a very futuristic, spacey, and upbeat vibe to it. It definitely captures the feeling of flying quite nicely; however, while I find the melody to be quite nice, I think it could have been developed a bit better. The boss theme, "Heavy Long," is a funky track offering a bit of a sinister atmosphere, but at the same time, it doesn't develop much, and may turn listeners away after a while. There is a bonus arrangement of the boss theme written in a funk style. Though it sounds dated by today's standards, the performers bring plenty of energy to the original. It's a pity the superior stage themes weren't adapted, though.

"I Defend STM" offers a very dark, industrial atmosphere with its heavy rhythms. The melody, which does take a while to come into the fray, has a bit of an exotic touch to it, but at the same time, its uplifting nature does contrast a bit too much with the brooding nature of the accompaniment at times. "Gratify" is an extremely jovial tune with a bright, cheerful melody. It is reminiscent, in ways, of the soundscape presented in "Live in Future," but overall, I find this theme to be much more enjoyable. Likewise, "No Delusion" offers an upbeat, yet mysterious tone. It does a good job at conveying the same atmosphere in "Gratify," but at the same time, I find the actual melody to be a bit less captivating.

"Still Love You" is an interesting chiptune. Compared to a lot of the melodies, this one seems a bit out of place. It has a very romantic soundscape to it and has a bit of a soulful touch, but in the end, it manages to captivating with a great progression and it works well with the mellow accompaniment and drum pads. Lastly, "Faze" has a bit of a groovy atmosphere, particularly due to the rhythm, while at the same time, offering a pretty rocking melody and some more intense and sinister moments. It really sums up that final stage atmosphere quite well. Finally, there is a sound effects medley for those that care.

The third disc of the album is a reprint of the soundtracks for Vimana and Teki Paki. The Vimana soundtrack is definitely the more successful. "Space High" is an extremely memorable chiptune theme with an infectious melody and a great atmosphere — there's that sense of adventure and heroism, combined with a feeling of flying. It's a fantastic way to open up the soundtrack. There's also a Type-B version of this theme that changes up the instrumentation slightly. "The Power of Darkness" is another invigorating and catchy chiptune. It has a sense of darkness, mainly due to the accompaniment, but the melody is absolutely marvelous, capturing both sinister moments and more heroic aspects.

"Max Power Up" is another amazing catchy chiptune melody that gives off a great sense of adventure, while at the same time, offering a bit of mystery, while "Bit Man" has a very catchy rhythm and a pretty decent chiptune overall. "Hyper Voltage Wars" has a slight Asian influence, mainly in the accompanying harmonies, combined with some more Middle Eastern inspired moments in the melody line. At the same time, there is this fantastic sense of adventure and a futuristic vibe from the rest of the melody. Combine that with some insanely catchy rhythms and it's a winner. Lastly, "Like Unto Fire", has a very futuristic and heroic tone, thanks to the catchy melody and harmonies. The frenetic bridge before the loop really helps accentuate that feeling of the adventure coming to an end. The rhythm is also quite nice, providing a nice tempo and accentuating that feeling of invigoration.

The Teki Paki soundtrack, composed by Tomoaki Takanohashi, features only a few themes. The first, "Coin ~ G.E.A.R.," is quite a sinister theme, focusing on industrial accompaniment and rhythms, but is too repetitive for my tastes. "Higher" is an intense theme with a fast paced tempo. While I do like the industrial influence, as it keeps the atmosphere from the first track intact, the overall track doesn't really develop much, causing a very monotonous sound in the long run. "Quick, Junk, Seaquence" has a very sinister, mechanical flair to it. While the rhythms are catchy, I find that the overall melody is a bit lacking. Lastly, "Epilogue ~ Le-Vel ~ Mechatropolis" is a short theme that keeps the sinister and mechanical tones of the soundtrack in place.

The fourth disc features the music for 1989's Fire Shark, also known as Same! Same! Same! in Japan. "Fire Shark" is a rocking theme that has some Asian influence, particularly in the introduction, before moving into a darker, but energetic, melody with the occasional heroic flourishes. "Give Me Your Heart" is a short chiptune theme that has both an intense A section and a heroic B section. The B section has a sort of romantic feel to it, despite the tempo, that really personifies the title of the theme quite well.

"Vice in Tokyo" has a dark, Asian inspired melody to it. It doesn't really do much to capture my attention in terms of melody, but some of the rhythms are quite intricate and fun to listen to. "Sadness in Your Eyes" is an invigorating chiptune track, but unfortunately one that doesn't really develop over its short length. The overall tone of the track is quite pleasing though.

"From the Sun to Me" is a fairly successful theme that carries an intense, yet heroic tone. While the A section doesn't really capture any sort of real attention, at least to this listener, the B section, with its more frenetic passages, helps give off a sense of an epic journey coming to an end. There is also a medley of the themes for the latter stages and a collection of sound effects from the title.

Finally, the release ends with the soundtrack for the notorious Zero Wing. The soundtrack starts off with "Open Your Eyes" with its heroic, adventurous tone and catchy rhythms. The melody is also quite successful, despite the overall short track length, and gives off that feeling of an epic journey ahead. "New Day for Me" offers a variety of soundscapes and some great melody and accompaniment. The melody has that sense of determination and adventure and is extremely memorable. This is definitely one of the best themes on the soundtrack. This track lasts for a little over three minutes on this album, but was oddly looped more extensively on the Toaplan Shooting Chronicle.

"Babylonia Nights" has a very exotic soundscape, due to the chiptune manipulation, with an invigorating bass line to match. It features a very catchy melody with an atmosphere that is a bit dark at times. Overall, it's quite a successful theme that captures the adventurous tone of the preceding themes. While the other stage themes preceding "You Get" have been quite catchy and memorable, this theme suffers from being pretty forgettable. The overall atmosphere of the track has a dark and heroic tone, but the melody doesn't really stand out. "Old Sense" has a bit of a militaristic tone to it, particularly in the rhythmic sections. The end result is a very tense atmosphere. Fortunately, once the melody really kicks in, the brooding atmosphere is offset by a fairly bubbly and memorable melody that really gives off a wonderful sense of freedom and adventure.

"New Say" is a short, but memorable chiptune with quite an adventurous melody and some more sinister tones, particularly in the B section. Surprisingly, despite its short length, it manages to develop quite a bit. "Same One" has a very upbeat, playful theme that gives off a sense of adventure. The melody is a bit lacking in terms of development, but it does manage to catch the listener's attention on occasion. Lastly, "Hit Man" is another very successful theme. It features a very catchy melody, that heroic tone that captures the final assault, and some slick rhythms. While not the strongest theme on the soundtrack, it does manage to succeed in capturing the many moods heard on the soundtrack. The release ends with a collection of sound effects from the game.

Price was the main problem with Pony Canyon's original releases dedicated to Toaplan's soundtracks. While the albums generally retailed at 1500 JPY, this wasn't always worthwhile given the soundtracks tended to be quite brief and sometimes average. Though this box is hardly a bargain, it gives listeners more for their money and is quite a wholesome listen overall. It also provides a fine compilation of Toaplan's best shooter releases, but note it has been recently superseded by the Toaplan Shooting Chronicle, another five disc release with much more content.