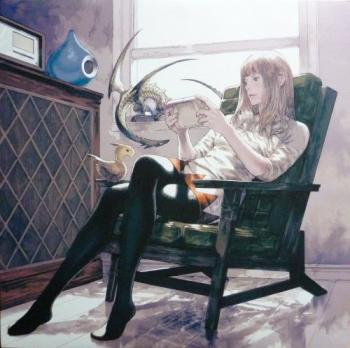 Always thinking of collectors, Square Enix released a series of vinyls during 2010 and 2011. One of them was SQ Trax, which features a selection of arrangements of Square Enix classics by mainstream artists such as De De Mouse and Idiot Pop. While most of the four tracks were sampled from the albums Love SQ, Chill SQ, and More SQ, it featured two semi-exclusives. The vinyl was initially exclusive to Village Vanguard, but several copies have made it overseas through Otaku.

Among the recycled tracks is Love SQ's 8-bit interpretation of two of Chrono Trigger's "Fanfare 1" and "Frog's Theme". Though a straightforward remix, it's a clear winner since Sexy-Synthesizer combines two of the game's catchiest themes with an even greater rhythmical impetus. Two particularly great moments are the dramatic lead-in to "Frog's Theme" at 0:52 and the particularly dashing interpretation of its melody from 1:49. The vinyl also incorporates Chill SQ's medley of Kenji Ito's Seiken Densetsu score. The arrangement transitions from a simple piano introduction into a dynamic guitar-based interpretation of the overworld theme "Endless Battlefield", while still maintaining the relaxing and acoustic feel. Hidefumi Kenmochi fluidly incorporates orchestral dabs and unobtrusive electronic beats to bring colour to the arrangement, even managing to incorporate the "Requiem" along the way and finally a reprise of the main theme "Rising Sun". As one of the highlights of the original SQ albums, it's a solid choice to bring to vinyl.

A radical take on a series' staple, "Dugem de Chocobo" from More SQ sustains its playtime well. Shisotex incorporates the original chiptune melody into a house remix featuring vibrant beats and voice samples. While many will find the main renditions of the melody obnoxious, the mix improves during the more experimental sections and is quite well-styled. It's bound to split opinions, but is nevertheless an interesting novelty. Less welcome is the re-appearance of Live-A-Live's final battle theme "Megalomania". Idiot Pop transforms the original rocking melodies with punchy piano chords and tropical beats to catchy and uplifting effect. However, the arrangement soon labours its source material and comes across rather superficial overall — something that might be produced in a quick jam session, but not worthy of publishing on an album. Choices such as "World Revolution", "Ahead on Our Way", or "The Extreme" would have been much better.

The so-called exclusives here are actually touch-ups of existing pieces released for the SQ series. Final Fantasy III's "Eternal Wind (Fly Away Birds Mix)" once again blends catchy chiptunes and punchy beats with worldly ululations from a female vocalist. However, this version includes a few adjustments such as the focus on a flute rather than synth lead. It's more polished than the original, but not worthwhile for those that have listened to Love SQ. Sadly, the polishes do little to save Q;indivi's rendition of Final Fantasy VI's "Aria di Mezzo Carattere". This rendition retains much of the tacky house sound of More SQ and features a meek and uninspiring vocalist once again. Intended to be a centrepiece opening the B-side of the vinyl, it actually ends up being a major disappointment.

SQ Trax is intended solely for the most enthusiastic collectors. The release recycles and occasionally touches up six arrangements from three prior albums. The final selection doesn't feel wholesome and several tracks are downright unwelcome. Nevertheless, those with an affection for vinyl releases and collecting rare items may consider this item worth their money. It's beautifully presented, but lacking in the content department.