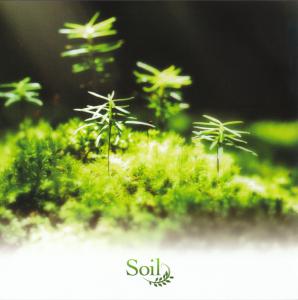 Soil is the title of the arranged album released with the limited edition of the Rewrite game for the Xbox 360. Featuring arrangements from various artists from Ge-On-Dan, it offers a variety of styles. How does the album fare for a bonus release and how does each arranger bring their distinctive style to the music of Rewrite?

The album opens up with an arrangement of "Daisy" by Keiji Inai. Inai expands the original by turning it into an exquisite orchestral theme that brings about the lighthearted tones of the original into a more romantic atmosphere. The piano in this arrangement is exquisite and really manages to convey a bit of that lightheartedness in the original. The orchestral accompaniment, however, is where the theme truly shines, as I feel the strings work really manages to heighten that sense of romance. It's a fantastic way to open the album. Norihiro Furukawa transforms "Scattered Blossoms" into an extremely inviting and intoxicating worldly inspired theme. While the original focused on piano, synthesizer, and strings, Furukawa transforms it into an extremely upbeat theme full of ethnic chanting and percussion, Celtic flute, accordion, and sitar work. The end result is a jovial re-imagination of the theme.

For this album, Shohei Tsuchiya arranges "Cotton Hat." While the original was fairly successful, minus the strange whining sample, I feel that Tsuchiya is able to expand upon the original. In many ways, this theme is very reminiscent of his Dariusburst arrangements, focusing on some slick bass grooves, exotic chanting, and some synthesizer manipulation, at times, sounding like DJ scratching, but at others, sounding a bit more futuristic. It's got a nice chill vibe and really contrasts nicely with some of the more energetic themes featured on the album. Shoichiro Sakamoto's arrangement of "Phobia" is quite nice. While it is done in his signature style, I feel that he was able to take the atmosphere of "Phobic" from the original and apply it to "Phobia," making the original tune much less playful in tone and much more sinister. It's an awesome rock theme focusing on industrial synth, a powerful guitar lead and powerful riffs, as well as Sakamoto's signature synthesizer in the melody. I also love the sinister choral tones and intense percussion. The guitar solo is absolutely amazing as well, providing a ton of energy to the mix.

Regular Key arranger MANYO's transformation of "Morning Glory" turns the upbeat original into a more contemplative and relaxing soundscape that evolves into a tempo akin to the original as time progresses. Initially, the focus is on music box and acoustic guitar work, providing that relaxing and contemplative atmosphere I described before, but as the piano is introduced, the tempo increases and more focus is placed on it and the acoustic guitar, turning the track into an upbeat rustic tune. While Maki Kirioka is known for her sometimes off-the-wall arrangements and original tunes, "Exploration," while being a bit eccentric, manages to be much more accessible than a lot of her arrangements. It's a very funky theme that has a worldly influence. The bass guitar grooves are beautiful, while the ethnic percussion and electric sitar really bring that worldly sound into the mix. I also love how she manages to incorporate some of the electronic elements of the original into the mix. It's definitely much more engaging than the original.

TECHNOuchi is also quite known for breaking down the fourth wall when it comes to his arrangements. His arrangement, "Illusional Land ~ Soft Windflower," a medley of the two themes, does something very interesting. The first part, "Illusional Land" is the original in reverse, which provides a very eclectic, trippy soundscape, but at the same time, one that is quite engaging. It's surely experimental and may not be everyone's thing. Fortunately, for those who prefer a less abstract arrangement style, the second portion is very faithful to the original, providing a beautiful electronic interpretation of the original that packs on a ton of atmosphere that really compliments the original melody quite nicely. TECHNOuchi's sense of atmosphere is top-notch and this arrangement is no different. Soyo Oka's interpretation of the electronic/rock tune "Retribution" definitely focuses more on the latter. The powerful guitar melody and riffs really provide the basis for the tune, although the synthesizer that is thrown in on occasion really adds a nice contrast, as do the orchestral strings accompaniment. Since her re-introduction into the video game music world, she has always surprised with her arrangements and this is no different.

"Reply," arranged by myu and sung by Annabel, takes the amazing original piece and transforms it into an experimental vocal theme. The track opens up with a music box arrangement of the melody before moving into a more experimental electronic tone featuring distorted vocals, industrial synthesizer tones, and ethereal accompaniment. When the vocals really kick in, the theme features a bit of a groovy soundscape. Compared to the original, most may not enjoy the experimental approach to myu's arrangement, but at the same time, many of the beautiful qualities of the original are present, more so towards the end of the arrangement, but the end result is still fairly successful. This type of arrangement is definitely a style I enjoy, but I can understand why some may not enjoy it. The album closes with "Anthurium" by Hideki Sakamoto and I find this arrangement to be the weakest on the album. It retains that upbeat nature of the original, but at the same time, I find it to be a bit muddy. Because the original theme was a bit unfocused, the arrangement suffers a bit as well. There are some elements that are successful, such as the overall instrumentation, but some of the elements — such as some of the chiptune and electronic elements — don't really go as well with the other styles in play. Some may enjoy this take on the original though.

In the end, I think that Soil is a very successful arrange album with only a few missteps here and there. Each composer offers their unique interpretation of the original and really manages to capture the atmosphere of the original soundtrack. If you are able to find this one for fairly cheap on an auction site and like the artists involved, it's definitely worth a look.