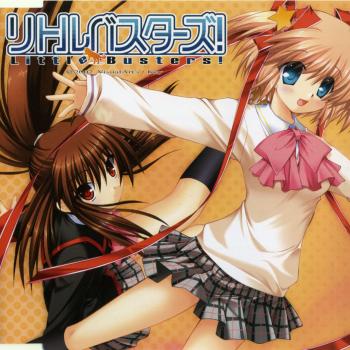 The opening theme for Little Busters!, named after the game, captures the high school focus of the title with its upbeat and youthful approach. Combining an alluring verse with an elating chorus, Jun Maeda created one of his catchiest songs to date here. Rita brings out all the radiance of the melody with her powerful performance; her vocals are girly enough to fit the setting, but rich enough not to be annoying. A few softer interludes, notably at the 2:51, also give a taste of her versatility and the rich journey that lies ahead.

"Alicemagic" is also filled with the unrestrained excitement of girly J-Pop. It's the least catchy and emotional of all the songs here, but it still has plenty of charisma and substance. With the help of the Japanese rock band MintJam, the instrumentals actually have a modern rock influence and make up for the somewhat generic vocals. Not brilliant, but a novel addition to Key's discography nonetheless.

Finally, "Faraway" is a ballad written principally for voice and piano. Rita isn't able to offer as mature a performance as Lia and riya did respectively on the ballads for Air and Clannad, but this isn't necessary a bad thing. Indeed, the fragile quality of her voice is endearing in itself and brings quite a tragic aura to the song in conjunction with the solemn vocals. Some sections here are truly tear jerking and the build-up at the end is magical. As is customary for vocal singles, the release ends with karaoke versions of all three tracks.

Little Busters! demonstrates once more Key's excellence in songwriting. All three songs here boast memorable melodies, emotional arrangements, and effective in-game integration. The opener is particularly catchy, while the closer really takes listeners on an evocative journey. Keep in mind that these songs are also available in full on the soundtrack release for the game, but this single is a fine purchase for those looking simply for the songs.

M03
Performed by Rita
Lyrics by Yuto Tonokawa
Music by Shinji Orito
Arranged by MintJam
Album was composed by Дзюн Маэда / Синдзи Орито and was released on May 25, 2007. Soundtrack consists of 6 tracks tracks with duration over about 30 minutes. Album was released by Key Sounds Label.