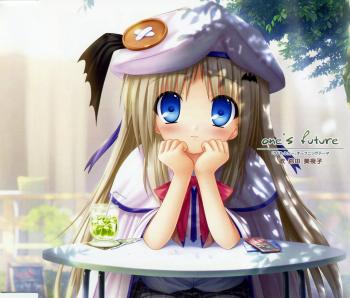 A spinoff of Little Busters! Ecstasy, Kud Wafter placed its focus on the young heroine Kudryavka Noumi, known as Kud for short. The main theme song for the title, "One's Future", reflected the focus with some girly J-Pop. It was released as a vocal single a couple of months before the game.

Simply put, you'll either love or hate "One's Future". Compositionally, it is quite similar to Key's other opening themes with its peppy melodies and punchy chorus. However, the performance by Miyako Suzuta is so childish that it will irritate many listeners out there; compared to Rita on Little Busters!, she is much more bold and shrieky. Given Suzuta is Kud's voice actor, her performance excellently captures the personality of the protagonist and will therefore endear many of the character's fans. Those that can enjoy her voice will certainly find themselves in for a delightful song, filled with catchy melodies and humorous interludes.

Sadly, this single doesn't offer much beyond the main rendition of the theme song. There are four other versions of "One's Future", but each is pointless. The Let's Go Ver is almost identical to the original, while the two instrumental versions are inevitably bland in the absence of the vocalist. No other theme song, including the ending theme "Stardust", was included here. This will certainly disappoint those expecting a single as wholesome as Little Busters!'s.

Previewing the original soundtrack, the single closes with an instrumental from the game, "Adagio for Summer Wind". The slow pace and lucid arrangement of this one are bound to inspire dreamy feelings in listeners. Just as with Key's best, the melody is filled with warmth and innocence, but also has tinges of sadness. It's one of many great pieces from the full soundtrack.

"One's Future" is certainly a select taste and this vocal single seemed to provoke mixed reaction from Key's audience. Even if you can tolerate the vocals, it's best to skip it in favour of the full soundtrack. Offering several theme songs and an array of background music, it's a far more wholesome purchase.