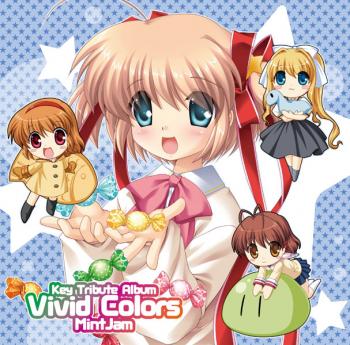 Japanese rock band MintJam dedicated many of their arrangements — both doujin and official — to visual novel developer Key, producing the outstanding Little Busters! Arrange Album -Rockstar Busters!- in 2007. Continuing their fascination with the company's soundtracks, the band self-released an official endorsed album dedicated to their music in 2009, Key Tribute Album -Vivid Colors-. This time, they placed the focus on covers of the company's vocal themes, performed by their own star TERRA. Did they pull off?

The album is divided into four sections by game, in order of chronological release. Each section is opened with a short instrumental solo dedicated to a major theme from the game: orgel for Kanon, guitar for Air, piano for Clannad, and synthesizers for Little Busters! Each instrument evokes the distinct sound for each game, while the featured themes are easily recognisable. However, the highlights on the release are the subsequent vocal performances featured in each section.

While Kanon and Air receive limited playtime on this album, MintJam offer covers of their unforgettable opening themes. The band convincingly tailor their sound to "Last Regrets", opening with a melancholy vocal performance and acoustic guitar accompaniment. But with the wailing electric guitar solo at the 3:21 mark, the cover liberates listeners and takes a much more motivating direction. Overall, this cover is spectacular and exceeds the badly implemented original in every way. The cover of "Bird's Poem" is also convincing. MintJam divert from the ethereal semi-operatic quality of Lia's original in favour of a youthful rock sound reminiscent of Gackt. TERRA softens his voice to capture the free-spirited nature of the original, but still brings plenty of energy to the song.

MintJam have no trouble with the covers of Clannad and Tomoyo After featured at the centre of the album. TERRA's alluring performance on "Mag Mell" captures that sense of going on an exciting adventure, while the beat-heavy backing is less trashy than the original. "Light Colors" further reflects MintJam's versatility, shifting from intimate to energetic sections in a natural manner. TERRA doesn't suit Little Busters!'s "Alicemagic" and "Faraway" quite as well as Rita, but he still brings plenty of emotion and lyricism to their performances. As always, the band provide a solid support and the guitar solos in the latter are especially evocative.

Keep in mind that MintJam only covered established originals with male vocals and enhanced instrumentation here, rather than offering fresh new remixes. Nevertheless, the fact the band covered each track so convincingly is a testament to their talent and versatility. What's more, with a generous price of 1300 JPY, it is certainly worthwhile for interpretations of some of the best game vocal themes out there. While now out-of-print, those that enjoy Key's vocal themes will find this release worth purchasing second-hand.