In the wake of Doshin, the GIANT 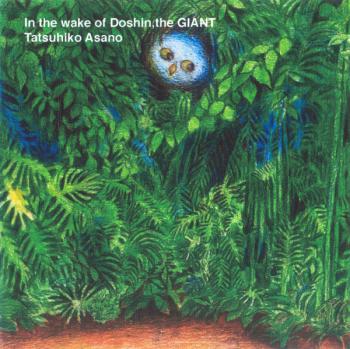 In the wake of Doshin, the GIANT
Front

Kazutoshi Iida was, back around the mid-1990s, one of the most distinctive game authors and designers in the Japanese game industry, having been responsible for brash design experiments in the form of games like Tail of the Sun and, most famous of all, Aquanaut's Holiday. Leaping from his cozy position at Artdink to form his own development studio under Nintendo's umbrella, he and everyone else at the Param studio went on to make Doshin the Giant into a reality. The game is still hailed as Iida's creative masterpiece in some sections of the Internet, yet its uneventful history in-production betrays a deeper connection to the N64DD, Nintendo's own experiment in providing N64 consumers a lucrative extension to their home gaming experience. Both the game and the add-on went on to become spectacular financial failures.

While I haven't played Doshin the Giant for the N64DD, not its Gamecube-upgraded port, I have heard the music from the game. There are quite few game music albums quite like this one, really. Listening to it for the first time, I felt as though I had discovered a whole new world, rich with aural splendors and strange soundscapes that never ceased to amaze me. Iida's penchant for designing interesting games is only matched by his ability to locate talented, unique individuals to develop said games with him. Though he had worked with ex-Jaleco musician Yasuyuki Suzuki on Tail of the Sun, as well as a few other game musicians who worked at Artdink on games like Aquanaut's Holiday, Doshin the Giant was a stranger of a game, and it needed an even-stranger musician to give it a musical air. To this day, Doshin the Giant was the first and only game that Tatsuhiko Asano — downtempo post-rock extraordinaire — happened to compose and arrange music for. The artist soon returned to the world of live-performance and continues to occasionally put out new post-rock albums (and T-shirts) on his website.

Doshin the Giant the game reconstituted game mechanics from god games like Populous and refit them into the Iida style of game-making. While most god games focus on statistical manipulation and generally make for a slow-paced gaming experience, this title is quick-footed, features more simplistic goals, and can be completed at a much-quicker pace than normal. Most god games also have period-based musical accompaniment, often using vernacular music alongside aged Western music. By contrast, Asano's score mixes tropical instrumentation inspired by the game's settings with heavy distortion of sounds, a modern sense of rhythm and tempi, and generates a beautiful anachronism that can be felt throughout the entire game. Outside and inside the game, Doshin's music can even be insubstantial and non-existent at times. But nonetheless I can't think of any better way to complement Doshin the Giant's unique premise and style than with a downtempo album of Asano's own design. Entitled In the wake of Doshin the Giant, it was first released by Media Factory and then republished with a bonus track by Asano himself.

Doshin the Giant is an odd beast to encounter. Filled to the brim with music of varying styles and purposes, I can only be thankful that Asano made sure to assemble the basics of the full album into one definitive "Theme of Doshin the Giant". This one theme develops so quickly within such a small time-frame that I just couldn't get it out of my head. Tropical animal calls and crass brass dance with a dazzling array of piano chords, mixed percussion, and distorted industrial drumming. Asano's own musical style gradually developed and darkened from the mid-'90s to where he is now — Doshin the Giant marked a mid-way point between electro-acoustic downtempo, and his later inter-mingling with aggressive post-rock music. By melding Western musical structure with Eastern arrangement, this opening anthem sets the whole soundtrack's definition right from the start. It's an amalgamation of sounds and separate elements that, were another musician tasked to put together, would form a random mixture, not an appealing opener.

It's the long, sophisticated tracks that define the unique nature of Doshin and the bald island. Meeting the "Yellow Giant", for example, I was pleased to see how gentle it really was. As with the "Theme", it features a catchy melody and interesting blend of timbres through which greenery and blue skies shine through. But while the "Theme" sought to characterize Doshin itself as this hulking behemoth, holding great power and mixed motivations, "Yellow Giant" sets a much softer tone for the album. "Bonfire" is a more definitive example of what it feels like to play Doshin the Giant. Starting out with hollering and dancing, it progresses into a moody post-rock groove of guitars and organs, before ending tentatively on a different note.

"All Along the BARDO Island" and "The Island of Memory" tell me everything I'd ever want to know about what kind of world Iida and Asano had discussed ages ago. With the former, a driving acoustic guitar melody holds hands with light snare drumming and backing guitar lines. The very next second, it seems, the musical adventure's marched onward with organ, Latin percussion, and a faint bass line, then into the watery depths with various assortments of strings guiding the listener along! So many layers in so little time. But that was nothing. "The Island of Memory" starts out set to static and a musical box, before piano, percussion, and bass hit the ground running. Then processed mandolin, manipulated piano, then all of these exotic sounds, idiosyncratic musical elements that create a timeless realm out of timely tools and modern musical invention.

There are a few context-dependent tracks on this album that often disrupt the stand-alone experience. "The Island Without Anything" is a melange of sound effects, villagers shouting unsettling cries, and a lack of structure and development. "The People's Life" follows it as an utterly-unrelated feature, a batch of musique concréte made from isolated sequences of whistling, yodeling, and a lot of different tools banging on things. I happen to like experimental music like this for the most part. But I don't like such music when, without solid effort and thoughtful planning, it gets slapped into the middle of an otherwise cohesive album experience and disrupt the flow of more interesting musical pieces. Nevertheless, there are a few fascinating contextual vignettes that deal with the idea of primitive communication between villagers from different island cultures. The chaotic "Preparation of the Festival" and jubilant "Music of the Festival" work particularly well as a duo.

I can't help but feel that the longer tracks on the album, clustered at the start of the album, should have been spaced out across the album playlist more effectively. Short anecdotes are the main meat of the album's latter-half and, while they are generally effective and fleetingly interesting, they don't leave as much long-term satisfaction. The "Light of Fifth" starts out humble and slowly develops into less melodic territory, even switching out distorted electro-acoustic guitar for a while — and then that's it. "Paradise Zone" and "Heat From Grass" each provide a new interpretation of the faux-tropical setting of Doshin the Giant. The former coasts along on electronically-amplified guitar waves, crafting both ease from gentle strings and unease from the strange tuning and reverb effects. And the latter? A strange dance of tribal percussion, wilderness noises, and fuming repetitive guitar lines. While such tracks take what was laid down in stone by the "Theme of Doshin the Giant" into much more compact and stressing territory, I mainly listen to the earlier, more straightforward tracks on the album, and with good reason.

Several more pieces on the album do a good job of capturing the feelings of longing and nostalgia I have attained from this album. The first is an acoustic deconstruction of the "Yellow Giant" melody. The recording quality is so clear, you can hear producer Hiroshi Masuyama sidling in and onto his playing chair, before plucking a poignant arrangement of the original theme to his heart's content. When "Time" comes around, things shift to slow folk grooves and jazzy stylings. A melody as attractive as the one in "Time" is nary to be found elsewhere on the album, and the same can be said for the kind of irreverent lounge feel flowing through the whole song. Coming in just before the end of the album, this mixing of ideas and emotion succeeds by being out-of-place, as if Asano had taken a step back and considered how distant and anachronistic the world created for Doshin the Giant happens to be. Whenever I listen to this secret side of the Doshin the Giant soundtrack, I end up drifting off into a daze.

Closing the album is "A Morning Jungle". Here the dawn rises to the sound of bird calls, stark strings, and sampled brass tones that all collaborate to weave a minimalistic image of a morning jungle. On its own, the piece is beautiful, striking, and effective. Taken into context, however, there's a sadness in my conscience, knowing that this music was never used and rarely-heard by most game music aficionados, and yet was recorded by a bunch of rag-tag developers who love to make games (and, in Asano's case, to make music). Doshin the Giant even reflects this loss at the end of the game, when the islanders' beloved Tower of Babel finally sinks the bald island, leaving Doshin helpless to save them and himself. Asano's own reprint of the original Media Factory album has a special bonus track, the unused "End Titles" roll. It's a more modern take on both "Time" and "Yellow Giant", with N64-compliant sound samples and a funkier, electrifying arrangement. There's a lot of contrast between this original staff roll theme, and what was ultimately used for the released product — a dissonant groove, enriched with tribal shrieks and atonality more likely to turn people away than suck them in.

This album helped me recognize what game music could strive to be and shaped me into the game music enthusiast I am today. It's an album with such unique stylings and immersive qualities that it is hard to replicate. But missed potential also defines this album experience — it's hardly an offensive album to listen to at all, though great intentions and wishful thinking doesn't always translate to a well-rounded and balanced CD purchase. But even with the inconsistency revealed by relistening to the album, the music — and the game that it emerged from — always struck me as a genuine labor of love, the sort that will never bear fruit in the current mainstream game industry. Emerging from this production, Asano has gone on to produce and perform his unique brand of downtempo post-rock live, in front of small audiences in his home country. Iida's done the same, having moved in with Grasshopper Manufacture. Despite its flaws, this album is a magical, unforgettable experience that should be worth anyone's attention. I'll go further. In the memory of Doshin, I found a textbook example of how great games, crafted from great visions, can fall into great darkness before finally being recovered, then elucidated.

CD-R rerelease of ZMCX-1055 with a bonus track. Sold by Asano himself through his website.