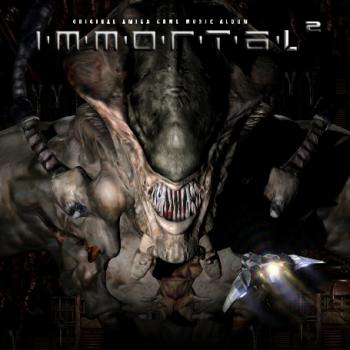 2002's Immortal 2 developed the concept of its predecessor with a series of remixes of Amiga music. But with a shift of producers — from Ruben Monteiro to Jan Zottmann — the album took a much more ambitious direction: the track listings expanded this time to incorporate items as diverse as Lionheart, Jim Power in Mutant Planet, and Shadow of the Beast 3; the arranger roster included famed original composers such as Tim Wright, Chris Hülsbeck, and Jochen Hippel; and the booklet was more elaborate and artistic than before. But more importantly, the emphasis was on creative and expansive reinterpretations of the originals, rather than conservative upgrades. As a result, listeners can expect plenty of highlights along the way...

The album opens with a remix of one of the Amiga's most popular racing games, Lotus Turbo Challenge 2, by original composer Barry Leitch. He finally received the chance to transform the title theme — originally composed for three channels in quite a hurry — into a fully-fledged racing anthem. The catchy bass line and jubilant melody of the original are faithfully preserved, but new elements such as a suspenseful introduction and elaborate guitar solos bring new life to them. The result entirely satisfies — as Zottmann put it, what could be more authentic than a new arrangement made by the original composer? SWIV's "Decimation" also demonstrates how Andrew Barnabas has grown over the years — from promising teenage demoscener to fully-fledged industry veteran. After much consideration, he stayed true to the pop-flavoured original, but not without providing new synth and a dramatic arch suitable for an epic.

Torsten Gellrich's hybridised orchestrations dedicated to Final Countdown and Carcharodon: White Sharks reflect the emotional potency of the Amiga's music. Like many tracks here, these remixes are flawed from a technical perspective — both are blatantly synthetic and feature quite an immature pop-influenced approach to orchestration. But this won't matter to most listeners, as their dark timbres and heroic progressions prove truly immersive. Leitch's orchestration of the closer Hero Quest is based on the typical timbres of fantasy adventures, but manages to stand out due to some (arguably excessively) lavish choices; the choral parts and piano decorations here add a truly magical feel to the piece, while the drum beats at the all-too-premature conclusion are equally epic. Matthias Steinwachs' electro-orchestral tribute to Lionheart, while a stepdown from his Sounds of Games version technologically, also packs quite a punch.

A number of other fan favourites nevertheless colour the remainder of the release. Battle Squadron is a definitive highlight here — Rob Klaren expands on several tracks from the original with a striking electronic remix filled with edgy rhythms and cheeky turns. Rainbow Arts favourites Chris Hülsbeck and Rudolf Stember bring the most out of X-Out and Z-Out — the first taking listeners on a big journey with its dark interludes, the other a charismatic example of Amiga pop despite its repetitious tendencies. Also enjoyable is Fabian Del Priore's version of the title theme from Jim Power in Mutant Power — among the more faithful to the originals, but a major contrast to its symphonic rendering with its exuberant electric guitar performances. Another catchy entry is James Pond: Robocod by the late Richard Joseph, which captures the unlikely nature of the protagonist with a gallant yet absurd folk dance.

Among the relative disappointments are Allister Brimble's Body Blows and Jochen Hippel's Lethal Xcess. While these upbeat tracks are a welcome break from the darker synthpop tunes, both sound too dated even for a retro tribute album. The former sounds it belongs to a 1980s pump-it-up dance routine, while the latter doesn't sustain its long playtime well and features a relatively unbalanced mix. Perhaps the centrepiece of the entire release is Tim Wright's "Gottabe". Here, the Psygnosis veteran captures all the emotions hidden in the original's ambient title theme with a vocal performance that grips from start to finish. The decision to incorporate lyrics really paid off here. The release concludes with the bonus track "Rain", a nostalgic synthpop composition by producer Jan Zottmann inspired by Amiga's classics. It's a fitting way to round off the release.

Immortal 2 is a major improvement on the original Immortal thanks to its diverse arrangements, creative emphasis, and, of course, the greater involvement of original composers. However, it lacks quite as many classics as its two disc successor does, so those looking for renditions of classics like Turrican, Pinball Dreams, and Amberstar might be a little disappointed. Keep in mind that, while these arrangements expand on their originals, they still retain that dated synthpop sound; while this will not appeal to some wider listeners, it should give Amiga fans exactly what they're looking for. Overall, Immortal 2 is not the best album in the series, it is an excellent development on the original ideas and is worthy of a place in any Amiga nostalgic's collection.

08 Z-Out "Level One"
Composed and arranged by Rudolf Stember