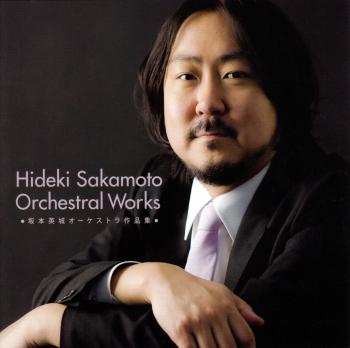 The growing popularity of composer Hideki Sakamoto, specifically with regard to his beautiful works for the echochrome series, has resulted in the release of an orchestral soundtrac. It features a complete arrangement of pieces from the first classically oriented echochrome title (and a snippet of the only track from the second) and a smaller collection of tracks from the jazzy and upbeat No Heroes Allowed. Sakamoto himself provides the arrangements for the former, while fellow composer Keisuke Ito arranged the latter. How do these arrangements compare to the originals, how do they stand on their own, and considering the variation in styles, how do they juxtapose together?

The album opens with a collection of five arrangements of pieces from No Heroes Allowed (aka Yuusha no Kuse ni Namikada 3D). "The World in my Palm" opens with a bang, and soon settles into a sweeping melody. The silliness of the original track shines through, and sounds rather striking with the austere coat of orchestral paint granted by arranger Keisuke Ito. The track is short and sweet, and serves as an effective opening. "Although Pleased by Everyone," a march, receives a rather heavy arrangement. The chromatic notes and chords might well be off putting to some, as would the reliance on bass, though the piece still manages to impress. "Final Gathering!" is more boisterous yet more melodic than the previous. The chromatic rises of the track, buffeting the more starkly melodic sections, creates a rather impressive atmosphere, even if the general rambunctiousness might turn some off.

A lengthy piece, "Dungeon Medley (The Beginning Is the Usual Dungeon ~ The Dungeon Is Superb ~ Afternoon Hero ~ There Is no Tomorrow for Heroes ~ The Sleeping Demon Lord ~ Evil Triangle)" is also featured in this section, and appears to be the highlight of this first collection of pieces. The track opens with a flute playing a beautiful melody at an almost whisper, and soon expands into a more complex piece. Every section is notable in this 8 minute long orchestration, and the transitions are handled well, though it's always rather obvious where one section starts and ends. The timbre varies depending on the section as well, though typically each starts off softer and concludes with a bang. The more graceful "World to Come" serves as a very fitting segue into the soundtrack's second portion. The piece is melodically striking and Ito's orchestration sounds superb.

The meat of the soundtrack is the arrangements from the echochrome series, and "prime #3 ~ prime #5" start this section off fantastically. The beautiful melodies of the originals are back in full force, and sound glorious performed by an entire orchestra. A greater variation in timbre is offered here compared to the relatively stark options open to the string quartet of the original, not to diminish the quality of the work there, and Sakamoto uses it to great effect. "prime #101" sounds dark and morose, with patches of brilliance striking out at times, creating a wonderful piece, and its followed by the flitting, staccato and silly antics pervasive in "prime #19." This latter piece might come off as a little irritating, and, while it receives a stellar arrangement, the plethora of quick staccato notes is a rather polarizing feature. This piece is juxtaposed quite well with "prime #313," which delivers another graceful, yet at times quirky, and well orchestrated melody to the listener.

The mostly soft and entirely quaint "prime #61" follows with what can almost be called a sparkling arrangement, an adjective likely brought to mind due to the effective augmentation performed on the harp. "prime #457" is more mysterious in nature, the strings in the bass providing brilliant bedrock to their higher siblings, sounding akin to a frothing ocean. The oboes and strings combine to form an effective, dark opening for "prime #59." The strings continue, outlining the beat of a waltz that sounds quite gorgeous. "prime #919" receives a fantastically powerful arrangement, featuring quite excellently placed brass. The soft and soothing "prime #5" serves as an excellent contrast to its preceding. Just active enough to not be plodding and graceful enough to not be boring, this piece, too, is the product of a fantastic arrangement. "prime #233" is another quirky piece filled with intelligent chromaticisms. The downward sloping motif used in this track is especially striking. The soprano in "prime #9973" gives the piece an ethereal and utterly spellbinding feel, though the bombastic finale feels entirely out of place.

The final track is a snippet of the 70 minute long piece from the sequel title, specifically, its first melody. The orchestration here presents a piece that is just as thrilling as the string quintet original.

This is quite a capable album. The real highlight here is the arrangement of the echochrome soundtrack, though the first five tracks should not be taken lightly. That said, those tracks are quirkier and more childish than what comes after. Their inclusion is interesting, especially considering that the echochrome pieces feature enough variation on their own that the first few tracks don't feel entirely necessary. Their being all shoved together at the start of the album doesn't help matters either, essentially creating a quite noticeable split, though the last of the five does make a valiant attempt at segueing into the second portion. It must also be remembered that most of these pieces started their lives as string quartets, and in some cases the orchestration cannot compare to the brisk sounds of the original. In other places, the orchestration augments the original quite excellently. This album does not come as eminently recommended for everyone as the echochrome originals, though for fans of those it shouldn't be missed, and it holds up extremely well besides.