FINAL FANTASY IV & THE AFTER YEARS Sounds Plus 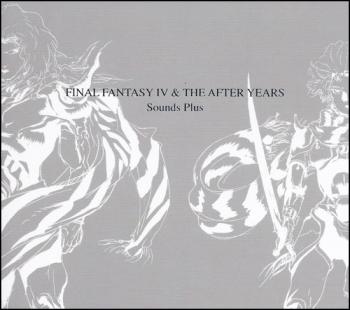 FINAL FANTASY IV & THE AFTER YEARS Sounds Plus
Front

Final Fantasy IV is celebrating its twentieth birthday this year in style with the release of Final Fantasy IV: The Complete Collection, a compilation that presents the original game, its Wii-centric sequel Final Fantasy IV: The After Years, and an entirely new game Final Fantasy IV: Interlude that ties the events of the original and sequel games together. To celebrate the latest incarnation of the game's re-release, Square Enix made available a limited Collector's Edition (in Japan only), which included a special soundtrack disc: Final Fantasy IV & The After Years Sounds Plus. What made the disc particularly special was the fact that Square Enix allowed fans to vote on five tracks which would be included in the final cut, a move which all but assured that the soundtrack would be a fan favorite. Although no official release of the Collector's Edition has been announced outside, is the music offered on the disc worth seeking out or importing?

At 18 tracks in length with one hidden bonus track (more later), Final Fantasy IV & The After Years Sounds Plus feels a bit short... and it would be if it were a complete compilation of music from all three games present in The Complete Collection. This is not the case, as the majority of the album focuses on The After Years and Interlude, with only six tracks from the original Final Fantasy IV soundtrack included. While fans of the original game may feel cheated, they would do well to remember that The After Years and Interlude have not had an official soundtrack release and this is probably the closest they will come to having one.

Some confusion may be had over where to start with the album: "Opening" is from the original soundtrack of Final Fantasy IV, while "Opening Theme PSP Ver." is a slightly shorter version of "Opening Theme (Full Ver.)" The new opening themes were arranged by Masahi Hamauzu and begin with soft, ethereal strings before becoming recognizable examples of his distinct musical style. Recalling Final Fantasy XIII's "Sabre's Edge", both of Hamauzu's opening arrangements rely very heavily on piano and snare drum to carry the more epic portions of the melody along. They are both enjoyable, energetic pieces, but seem strangely out of place in this retro-focused title despite their mutual progression into the classic Final Fantasy Main Theme.

The music of The After Years was composed and arranged by Junya Nakano, so it stands out from the more familiar styles of Hamauzu and Uematsu. "Mysterious Girl ~Minus~" is a surreal, almost alien, piece that builds tension nicely through tinkling chimes and muted strings. "The Dispossessed Eidolons ~Minudes~" builds upon the ominous feel of "Mysterious Girl" by taking its main theme and transforming it into a more fast-paced action track with offbeat brass hits and piano runs adding to the feeling of groundlessness and uncertainty. Although perhaps not the most memorable action track from a Final Fantasy title, it is one of the most technically complex and adds a refined touch to the soundtrack. "True Moon" follows, and fits stylistically with "Mysterious Girl" and "Eidolons", being more ambient than action-oriented.

"Planetary Core" is a classic Final Fantasy epic track, with swelling synthesized vocals and running strings present throughout. Its feel is familiar, being far closer to the traditional music of the franchise. This is needed, stylistically, to ground the soundtrack after the more experimental opening arrangements. "Straying from Evolution" is a great piece, but not one to listen to when you have a headache which, incidentally, may well be caused by the opening of "The Battle for Life". As boss fight music goes, "The Battle for Life" ranks among some of the best offered by Final Fantasy games in a long time but the opening cacophony of dissonant strings and vocals (which thankfully lasts for a mere 10 seconds) may likely preclude it from becoming a fan favorite any time soon.

"Master of Imagination" is a curiously ponderous piece that builds an ominous air with a slow, rolling bass progression rather than the energetic offbeat hits of "The Dispossessed Eidolons". I found this track to be somewhat forgettable, but extremely evocative when I was listening to it. "Straying From Evolution" is a strained piece that moves away from the ambient feel of "Master of Imagination" and returns to "The Dispossessed Eidolons" for its inspiration. Everything about this track sets the listener on edge, from its grating, brass-heavy countermelody to its minor chord progression.

The two ending pieces, "Epilogue I" and "Epilogue II" are wonderfully ambient pieces full of allusions to earlier themes in the game. Bell tones, synthesizers flutes play elegantly and throughout "Epilogue I" leading to a feeling that is more relaxed than triumphant. "Epilogue II" is slightly more upbeat piece which cruises along over a basic drum syncopation that serves as a unifying force between cascading harp phrases and gentle woodwind melodies. "Finale" shoulders the triumphant swells and reprisals that one would expect from an ending track and wraps up the new content rather nicely, blending elements of the newer musical approach with Uematsu's more familiar musical style.

Representing the original Final Fantasy IV are standards such as "Opening", "Final Fantasy IV Main Theme" (overworld music), "Theme of Love", "Battle 2" and "Battle with Golbez's Four Emperors". These tracks remain true to the 2008 DS soundtrack release and stand out as some of the best examples of Nobuo Uematsu's early work on 16-bit games. In particular, the distinctive harp opening of "Main Theme" recalls the familiar prelude, before the melody and its simple, but effective, drum cadence begins. I was never a huge fan of Final Fantasy IV, but this ranks among my favorite overworld pieces that Uematsu has composed to date.

"Battle with Golbez's Four Emperors" is a terrific boss fight track that has held up remarkably well over the years. From the first measure of the piece, there is no doubt in the listener's mind that they are in for a tough fight and while different incarnations of the game have adjusted the personalities of the four elemental fiends, the ominous music that accompanies them into battle remains as strong today as it was back in 1991. There is also the unlisted bonus track "Troian Beauty", a beautiful and sleepy waltz that is perfect to save for after being riled up by "Four Emperors".

As far as retro soundtracks go, Final Fantasy IV & The After Years Sounds Plus is sure to score points for both nostalgia and innovation. Although by no means the easiest soundtrack to procure, it is a must-have item for fans of Uematsu, Hamauzu or Nakano. If you already have the Final Fantasy IV soundtrack and are only interested in music from the earlier iterations of the game, you may well be disappointed with this album, but if you are one of the millions of players who has downloaded and enjoyed The After Years or like your Final Fantasy music to have a bit more of a progressive edge, this album will surely be worth the effort it takes to find it.

Enclosed with the Japanese limited edition of the game. No separate release is currently planned.

Special Thanks
All Staff of "FINAL FANTASY IV & THE AFTER YEARS"

Tracks 14 ~ 19 were selected for arrangement by fans through a poll on the Square Enix Members website.
Album was composed by Дзюнъя Накано / Нобуо Уэмацу and was released on March 24, 2011. Soundtrack consists of 19 tracks tracks with duration over about 60 minutes. Album was released by Square Enix.