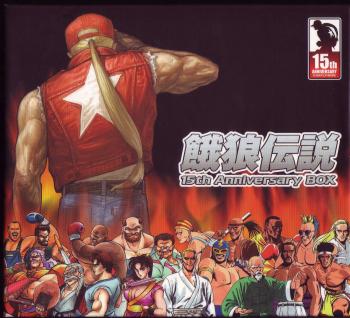 With franchises such as King of Fighters, Art of Fighting, and Samurai Shodown, SNK has dedicated their activities to manufacturing versus fighting games. However, their very first entry into the market was 1991's Fatal Fury — a game that itself inspired numerous sequels and ports in the eight years subsequent. At the heart of the series' success is its diverse and likeable cast of characters, with names such as Terry Bogard, Geese Howard, and Mai Shiranui being immortalised in the minds of arcade gamers. Ever since its inception, the series' music has maintained this focus with its emphasis on character-based stage themes — with the personalities, ethnicities, and ambitions of each character being uniquely captured. With this series, SNK also showed off their rock- and jazz-based sound to audiences — considerably more cool and gritty than the sounds competitors such as Capcom and Sega were offering at the time.

The Fatal Fury series and its music were sufficiently popular for Pony Canyon to release numerous albums dedicated to the series between 1991 and 1998. In general, each game was commemorated with an original score, featuring the arcade sound version, and an arranged album, focusing on fleshed-out studio performances of the character themes. But with many new games in the series being mere upgrades than true sequels, there was inevitably quite a bit of repetition between the releases. The Fatal Fury 15th Anniversary Box (known in Japan as the Garou Densetsu 15th Anniversary Box) features the original scores from the nine main games in the series across six discs. It generally focuses on the arcade versions of the original scores, though some tracks from the localised versions and console ports are included. This box set is generally encompassing and well-presented, but does the featured music stand up well enough to be worth its large asking price?

The first disc of the box set features the arcade version of the original score for 1991's Fatal Fury. Few themes from this rather brief score have become classics, though many helped to establish the SNK sound. For example, "Michael Max's Theme" emphasises their classic rock sound with its light-hearted melodies and thrashing guitar riffs, whereas "Duck King's Theme" offers a fresh combination of jazzy leads and punchy piano chords. Its also surprising how well the score is synthesized compared to competitors such as Street Fighter II at the time. This particularly comes across in themes for Brazilian Richard Meyer and Chinese kung fu master Tung Fu Rue, which boast surprisingly authentic composition and synthesis. Also impressive are the increasingly intense rock themes for the boss characters, culminating in Geese Howard's appearance. The score is rounded off with some rhythmically driving menu themes, a soothing jazzy ending theme, and several title calls from the overseas version. The first disc also includes an arranged version, discussed further below.

It was with the arcade soundtrack for 1992's Fatal Fury 2, featured on the second disc, that SNK introduced more iconic character themes. The returning heroes from the original game are finally given their own themes: Terry Bogard's "Kurikinton" is an imitation of the jazzy Peter Gunn theme, his brother Andy's "Pasta" is a traditional Italian dance, and Joe Higashi's "A New Poem..." is filled with Asian instruments and tonalities. Other characters that make an memorable entrance include Kim Kaphwan with a riff-heavy rock track and Mai Shiranui with an alluring blend of influences. Many of these tracks are derivative and build little on their precursors, but are still catchy and distinctive enough to make an impact on players. The second disc also includes a few exclusives added to its enhanced version, 1993's Fatal Fury Special, including the themes for four characters returning from Fatal Fury and Art of Fighting. While not much on their own, these supplement the personality and diversity of the character-led soundtrack.

After their hit-and-miss approaches on previous titles, SNK's sound team offered an extremely tight score for Fatal Fury 3, released in arcades during 1995. With the exception of Geese Howard's pervasive theme, SNK offered all-new themes for the game's characters, both new and old. This gave the composers the opportunity to really develop the series musically and incorporate new ideas. Major highlights include Terry Bogard's fantastic hybrid of the company's jazz and rock styles, Hon Fu's incredible hummable pentatonic anthem, and, of course, Mai Shiranui's spiritual theme for koto, harp, and piano. The score isn't such a jump technologically — listeners should check out the game's excellent arranged album to hear the best versions of such tracks — though it still achieves a lot with the resources available. The orchestral tracks at the climax are fine examples. The third disc also includes the tracks added for the Fatal Fury 3's localisation and its enhanced version, confusingly titled Real Bout Fatal Fury. While hardly noteworthy on their own, they add completeness to the box set.

After such heights, the contents of the fourth disc — while well-presented — are somewhat disappointing. Largely dedicated to the music from 1997's Real Bout Fatal Fury Special, the disc features a mixture of old and new. A large portion of the soundtrack is dedicated to arrangements of existing character themes from the franchise. The sound team carefully selected tracks that matched the personalities of the featured characters, while resonating with series' followers. Some reprises are extensively arranged, for example Terry's returning theme from Fatal Fury 2. Others only receive a few tweaks or enhanced samples, such as Andy's theme from Fatal Fury 3. Given most tracks emerging from Fatal Fury 3 were already accomplished, the sound team saw little reason to change them, though this results in considerable overlap between the third and fourth discs. The new tracks are a mixed bag, spanning the excellent urbanised theme for Hon Fu to the cookie-cutter rock piece for Franco Bash. The tracks added to the enhanced version, 1998's Real Bout Fatal Fury 2, are few in number and mediocre in quality.

The fifth disc is dedicated to the arcade version of Fatal Fury: Mark of the Wolves (aka Garou: Mark of the Wolves). The SNK Neo Geo Music Performance Group offered plenty of new tracks to depict the fresh cast of the title. But despite being a reboot of the franchise, they still preserved the distinctive stylings and sound of the franchise. "Sunrise on the Train", while technically a new composition, stays true to earlier portrayals of Terry Bogard. Likewise, the themes for Kim Kaphwan's sons preserve the classic rock influence of their father's tracks, while contrasting their personalities. Though the familiarity is sometimes a good thing, some more experimental entries would have made this fifth disc more interesting. In addition to sharing similar tracks, some tracks — notoriously Rock Howard's "Spread Your Wings" — are even blatant ripoffs of popular melodies. The synth is surprisingly primitive for 1999, especially in contrast to the resynthed, still-unreleased score for the console version.

The final disc features the soundtrack for 1999's Fatal Fury: Wild Ambition, the only 3D fighter in the franchise. But rather than use the dated arcade sound version (as featured on the game's soundtrack album), Scitron Digital Contents used tracks from the greatly enhanced console version (based on the game's arranged album). After the arcade scores that preceded, this shift is very obvious and will inspire mixed reactions. Regardless, the featured track provide excellent examples of the diverse and well-produced pieces the series' arranged albums have to offer; highlights include the urbanised electro-orchestral soundscapes of Andy Bogard's theme, the wistful traditional Japanese instruments in Mai Shiranui's theme, and the blistering rock band performances for the final boss. Beyond the tracks ported from the arranged album, SNK added several other tracks for the final score: dark cinematic prologues, rocking menu themes, and the themes for bonus characters Duck King and Mr. Karate. These aren't always presented in a polished way, and the prologue themes even feature some voice and sound effects.

In addition to offering the complete soundtracks for the series' nine games, the Fatal Fury 15th Anniversary Box features quite a bit of bonus content. As mentioned previously, the end of the first disc includes seven diverse arrangements by visual kei band Rose&Rosary. "Raiden the Brave" is an homage to the series' rock sound, with with bright old-school melodies and over-the-top electric guitar solos. "An Ego for Geese" undergoes plenty of dramatic shifts during its four minute playtime: the introduction has gothic vibes, the body is filled with electrifying rock, while the interludes focus on soulful acoustic guitar parts. Despite being regarded as a rock band, Rose&Rosary explore jazzier territories with the bright lounge improvisation "Click-king-tone!" and the cheesy but soothing saxophone-led contemplation "The Sunset Part V". "Pasta (Al Dente" and "Feared by 100 Southern Thailanders" emphasise the worldly nature of the series, combining powerful lyrical melodies with traditional Italian and Asian stylings. While a little brief, this is certainly a solid exclusive that will bring back plenty of memories.

Hardcore fans of the series will also enjoy the DVD bundled in the box set. Instead of offering further musical content, this DVD features the 20 minute movie Fatal Fury: Memories of Stray Wolves. First shown at the Tokyo Game Show 2006, this feature combines still pictures and selected clips, with performances from the returning Japanese voice actors. The 30 page booklet is also well-presented and thorough. It includes a game-by-game history of the series, artwork of all the characters, and a forward from the series' original composer, Toshikazu Tanaka.

Pre-dating all their other fighting games, the Fatal Fury series really defined SNK's approach to game design and music making. Ever since the series' debut in 1991, the series' music stood apart from competitors from Capcom and Sega with its distinctive jazz, rock, and worldly stylings. In the eight years that followed, the Neo Geo Music Performance Group offered numerous unforgettable themes for iconic characters. The early games in the franchise also pushed technological barriers and made the most of the Neo Geo arcade machine. That said, the individual soundtracks are a mixed bag; the early soundtracks tended to be inconsistent, while the later soundtracks often rehashed the same stylings and melodies. Despite their admirable efforts, it's also clear that SNK were often hampered by technological limitations while composing the soundtracks; the series' numerous arranged albums are a fuller realisation of their inspirations, with fully-fledged stylings and live performances.

Regardless, Scitron Digital Contents produced an excellent commemoration of the historic Fatal Fury series with this box set. It features the complete soundtracks for all nine main titles, while avoiding unnecessary repetition of themes. What's more, they are packaged in a well-presented box together with welcome bonus content, including an arranged version and a commemorative video. There are a few inconsistencies (e.g. the arranged Wild Ambition soundtrack) and a few other problems (i.e. voiceovers, lack of loops), but these are only occasional. It's overwhelmingly clear that a lot of love and attention was put into this release. Even so, the featured music may not appeal enough to warrant purchasing such an expensive set. Some may wish to focus on individual scores rather than the inconsistent overall series, whereas others will prefer the series' fully-fledged arranged albums. This box set nevertheless deserves a treasured place in the collection of completist, long-term Fatal Fury fans.

This 6-Disc Boxset contains the complete soundtracks to the legendary "Fatal Fury (Garou Densetsu)" series of fighting games from SNK.

Includes soundtracks for games in the series plus a bonus DVD with story footage about the game shown at the 2006 Tokyo Game Show.

Credits from the booklet:

Album was composed by Shinsekai Gakkyoku Zatsugidan and was released on November 15, 2006. Soundtrack consists of 248 tracks tracks with duration over . Album was released by Happinet.