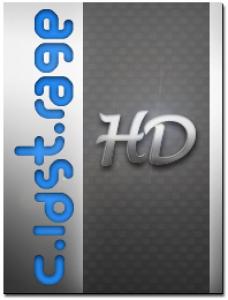 If you've seen the Wipeout series' album history, you'll realise that it has jumped around all over the place in regards to featuring licensed music or music from the main resident composer Tim Wright (CoLD SToRAGE). Ironically, with the first and second games only seeing album releases for the licensed music, Wipeout HD's sole album release is actually an unofficial one which ignores the licensed in-game music; CoLD SToRAGE HD features six of Cold Storage's tracks, produced to complement the game, despite not actually featuring within it.

The album starts off with the ambient and satisfying "Beseitigen", which holds a relaxing atmosphere with its laid-back development and reassuring synth instrumentation. Starting off with a minimalistic and inspiring bass loop, CoLD SToRAGE soon integrates a drum loop into the track, before switching the motif onto a sharper synth sound at 0:53. After a decent amount of development, it soon morphs into its best section at 3:55, where we are introduced to an electrifying melody which graces the background beat and subtle harmonies.

"Turbine" is a fairly relaxing track too, but CoLD SToRAGE utilises other techniques to create this sound. Most notable is the combination of a strong driving beat through the track alongside some inspiring melodious interjections played on different instruments. To point out a favourite sound, it has to be the panpipe sound which comes in at 2:18 — with its shrilling and minimalist melody, it seems to add a bit of authenticity to the track. My favourite of what I would call the more ambient tracks though is "XYZ Reboot." The slow-paced nature of this track, the choice of synth noises, throbbing melodies, and electrifying soundscape add up to create a prime example of a simple piece which achieves so much motivating power.

The other three tracks on the album, "'95 Future Echoes," "Pencil Neck," and "Orchasm 8" are each a bit more powerful and abrupt than the ambient tracks previously discussed. This, of course, is a good thing, and makes way for some fantastic development and pumping bass beats. "'95 Future Echoes" actually acts as a combination of Cold Storage's ambient and aggressive styles. The track starts off with some compelling synth before the introduction of an eccentric bass rhythm a little later on.

"Pencil Neck" and "Orchasm 8" cut straight to the chase though and each start off particularly powerfully with the use of some ominous sounds. "Orchasm 8" has the privilege of featuring one of the album's most satisfying and energetic sections on the album, namely the fantastic interjections from 1:52 onwards which really pump the melody out. "Pencil Neck," though, is my favourite track on the album. I feel that this theme is the only one which truly touches upon the mastery gifted to us in the Wipeout series, with the main reason for this being down to the direction of its development. "Pencil Neck" is so nicely developed that it almost becomes a different track at times, and CoLD SToRAGE really seems to explore everything from the inclusion of new sounds (such as vocals) to focusing on rhythmic shifts throughout. If there's any track which you should listen to out of the whole album it's this one.

Having previously strayed a little from his Wipeout roots with his debut album Melt and the following Android Child release, CoLD SToRAGE attempts to return to the groundbreaking electronica sound which he had created for the game series. He, of course, succeeds with flying colours, with each track being full of the tantalising textures, riveting rhythms and magnificent melodies which were the forte of his contributions to Wipeout and Wipeout 2097. This, when combined with newer, crisper sounding synth, present on both Melt and Android Child albums, makes a well-worthy album which competes with some of Cold Storage's best. This Wipeout HD tribute album is certainly one you should look into downloading from the artist's website.

"Cold Storage HD" is dedicated to my wife Claire and launched on her Birthday... all her love, support and strength keeps me going!
* This track (6) was recently discovered on a ZIP disc backup. It was intended for inclusion on the very first Wipeout but was thought to have been totally lost due to an Amiga floppy drive failure. Now you can hear this track for the very first time!

PLEASE NOTE THAT THE TERM "HD" IS SIMPLY PART OF THE ALBUM NAME AND DOES NOT IN ANY WAY REFER TO SURROUND SOUND RECORDING. PLEASE BE AWARE THAT THIS ALBUM IS IN STANDARD STEREO MP3 256KBPS FORMAT.
Album was composed by Тим Райт and was released on October 14, 2008. Soundtrack consists of 6 tracks tracks with duration over about 40 minutes. Album was released by CoLD SToRAGE.