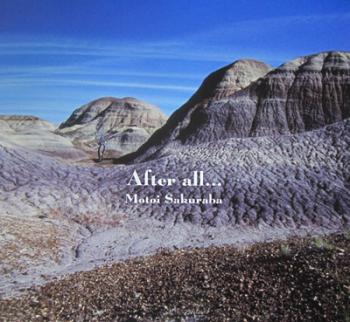 After all... is the third solo album by Motoi Sakuraba, originally released at Fantasy Rock Fes and later made commercially available. While Gikyokuonsou focused on progressive rock and Forest of Glass focused on piano solos, this album is a mixture of the two, although it is more heavily focused on the former. How does Motoi Sakuraba's third album compare to the previous ones?

The album opens and closes with piano pieces as well as features one in the middle as an interlude. The first, "Sorrow," is a very somber, melancholy piece with a very touching melody. Motoi Sakuraba brings out all the emotions of the simple melodies and arpeggios with his heartfelt performance. It is, however, short, as are the other piano pieces and mainly serves as a way to open up the album. The interlude piece, "Not here," has a very sad, almost abandoned atmosphere, yet there is an air of bittersweet romance heard in the piece. Of the three piano pieces, this one is probably my favorite and is definitely the most emotionally engaging. The last piece, "Suffering mind," is also very desolate in sound and, as the longest piano track on the album, it's definitely the most developed. There's a wonderful elegance to the piece, but at the same time, feelings of torment are present, particularly in the more chaotic and darker sections of the piano piece.

The majority of the album, though, features progressive rock in a variety of ways, some more similar to Sakuraba's tri-Ace works and some more reminiscent of his first solo album. The first progressive rock piece on the album is "Megrim," a track that has a sound that is a fusion of his first solo album and some of his RPG work. It features some fantastic keyboard sections, an intense rhythm, and some classic Sakuraba keyboard work mixed with the spacey synthesizers. It creates a very engaging dynamic — some passages featuring epic, choral inspired moments, others more frenetic solos. "Try again" is another piece that bears a bit of fusion between his solo and RPG works. I really like the rising chord progressions that help build up the epic nature of the piece and how it moves immediately from those types of passages to more keyboard heavy sections and heroic futuristic soundscapes. As always, the way Sakuraba manipulates the keyboard during his solos is awe inspiring and it really manages to bring the piece to a new level. The more intimate and darker moments of the piece are few and far between, but really manage to bring a different musical texture to the forefront.

Another of my favorite pieces on the album is "Stand still." This one is definitely conjures up images of Gikyokuonsou, but done in a more modern style where some of the piano is a bit jazzy, reminiscent of Sakuraba's more recent focuses. I really love the piano focus of this piece as it offers a very romantic atmosphere and I think it really works well with the amazing bass guitar work and drums. Of course, there are some more synthesizer inspired sections that work well, and the slower paced sections offer a calming, serene, atmosphere. This is truly one of Sakuraba's best progressive rock pieces in years. The title theme, "After all...," is another theme that has a classic sound. As with "Stand still", there is a focus on piano that really contrasts nicely with the synthesizer focused sections of the track. One of my favorite sections of the entire piece is when the tempo is slowed and the piano flows quite poignantly. There are also some spookier sections, although short, that combine the keyboard and piano work in a nice way. Fans of Gikyokuonsou will probably enjoy this piece quite a bit.

"Shade inside groping" is most reminiscent of the darker themes from Star Ocean: The Last Hope, although done with a more synthesized focus, similar to some of the earlier dungeon themes in the game. Of all the tracks, I find this one to be the least successful, as it comes off sounding a bit uninspired, but it does have its merits. There is a tremendous amount of atmosphere and I really like how the tone of this piece really contrasts with much of the album. The synthesized choral notes and the keyboard passages work wonderfully together as does the slow tempo of the drums and bass guitar work. In the end, though, it is definitely worth a listen. From the onset, "Lie" definitely hypnotizes you with its funky bass guitar riffs before leading into some more tri-Ace sounding keyboard work. The melody has a very futuristic, spacey sound to it, at times heroic, at others, contemplative, and the bass guitar work and drums really help reinforce the melody. There are also some funkier passages that sound like they'd work well in End of Eternity. As with "Shade inside groping," it is one of the lesser inspired pieces on the album, but the interesting bass guitar work does help add something new to the mix.

The last progressive rock piece on the album, "The way," although not the most inspired piece on the album, is definitely the most entertaining, especially for fans of Sakuraba's battle themes for the tri-Ace developed games. It opens up with a very heroic, spacey soundscape that definitely conjures up images of Star Ocean: Till the End of Time. It's a slow tempo section, featuring synthesized chorus, brooding drum work, before building up into a tempo more akin to a battle theme. From there, it's Sakuraba doing what he does best. The keyboard work and various synths are absolutely stunning and he manages to use them in a variety of ways to draw some clear musical contrasts in terms of texture. As with every theme, there are a variety of solos that really shine and add some nice improvisation to the mix. It's truly a highlight on the album, despite the typical Sakuraba sound, and would definitely be one of his better battle theme melodies would it have been used in such a manner.

Although not quite as successful as his previous two solo albums, After all... is an appealing fusion of ideas from his previous two solo albums as well as some of his Star Ocean based work. There are a variety of different atmospheres, ranging from melancholy to upbeat, and the flow of the album is quite nice, as each progressive rock piece offers a different overall tone. Given it tends to revisit ideas from his past works, some of the pieces do come off a bit uninspired, but nonetheless enjoyable. For fans of Sakuraba's progressive rock, this should definitely be sought out.

A preview release of Motoi Sakuraba's next original album and only 500 copies were sold for Fantasy Rock 2011.

All Compositions & All Performances   Motoi Sakuraba
Art Direction & Design : Kenji Ishikawa [the GARDEN]
Title : Yuko Sakuraba
Album was composed by Мотой Сакураба and was released on September 17, 2011. Soundtrack consists of 10 tracks tracks with duration over about 45 minutes. Album was released by Strange Days Records.