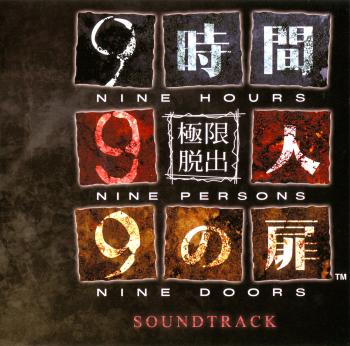 9 Hours 9 Persons 9 Doors is a suspenseful puzzle/adventure game about nine people who are trapped on a ship with bombs inside of their body. The latest in a line of graphic adventures from Chunsoft, it received much acclaim and generated a niche following. The music, created by Shinji Hosoe, is what he likes to classify as "dark electronica." Game reviewers emphasised how well the soundtrack supported the tense atmosphere of the game and emphasised impending doom. But just how well does it stand up on a stand-alone basis?

The album opens up with "9 Hours, 9 Persons, 9 Doors," the main theme of the game. Darker than most of Shinji Hosoe's usual compositions, it establishes just the right mood for the scenario. It opens up with a mysterious atmosphere combining the melancholic tones of a piano and cello with ethereal synthesizer backing. It soon shifts into an hybrid of rock and drum 'n bass work that reflects the intensity of the scenario. As the track comes to its conclusion, the mysterious atmosphere returns once more, albeit slightly more intense with the additional of some powerful electronic beats, causing the track to come full circle and also give a little preview of the nature of the rest of the soundtrack.

The soundtrack is split between story and escape sequences that are interspersed with one another. The majority of the escape sequence tracks all have to do with the Nonary Game that is being played by the characters in the game. Despite there being nine such tracks, Shinji Hosoe manages to effectively create some extremely unique compositions that capture the gravity of the endgame. Themes like "Unary Game" and "Nonary Game" focus more on intense electronic beats, intricate rhythms, distorted synthesizer, and industrial tones to express the dire situation the main character is put in, both at the start and finish. Others like "Binary Game," "Ternary Game," and "Septenary Game" focus more on calmer atmospheres with a strong melodic focus with a sinister sheen to them. Despite the calm demeanor, "Ternary Game" in particular gives the impression that time is running out with its steady electronic beat.

"Quaternary Game" and "Senary Game" are much more sinister in approach, focusing on intense beats and percussion work. The former has a very frenetic atmosphere for the most part, but the sultry saxophone synthesizer work in the melody line helps cut some of the intensity of the track. "Senary Game", on the other hand, undergoes a spectacular buildup from its eerie synthy opening towards a meaty centre featuring a steady house beat. "Quinary Game" and "Octal Game" take a more ambient approach, creating moody soundscapes with a blend of forces and styles. The latter, in particular, is a bizarre hybrid of tribal, industrial, and jazzy tones.

In addition, there are various other story and escape sequences that capture a variety of moods. The contrast of piano lines and electronic components is once again the focus of "Extreme Extriction". But in contrast to the opener, the beats are much more intense here — capturing the oppression of the featured characters. "Tinderbox" and "Eternity Box" further capture the essence of impending doom with their hopeless soundscapes. "Who is Zero?" and "Chill and Rigor" also blend electronic and acoustic components to captivating effect. While the latter doesn't develop much, the former really gets to the essence of the question "just who exactly is behind this game?" with all its suspenseful and intriguing elements.

Of course, there are some more melodic compositions on the soundtrack as well. The pensive melody of "Recollection" — baed on the main theme — brings a striking contrast to the intense approaches featured elsewhere. The accompaniment has a retro FM synthesizer sound, emphasising the nostalgic vibe as well. For "Tranquility," a synthesizer dominates the melody line creating a very mystifying, yet soothing atmosphere. The accompanying beats a slight jazz influence, making the soundtrack even more stylised. "Morphogenetic Sorrow" also incorporates the main theme of the game in a richer piano-laced orchestration. It is a haunting, beautiful composition that really manages to capture the feeling of sadness. Compared to the rest of the soundtrack, the ending theme "9 Years" is not something one would expect at all on the album. It is the sole track on the album that is purely orchestral in nature, focusing on romantic piano and strings to craft a very stunning and hopeful atmosphere that signifies the successful escape from the Nonary Game. It's also nice to see a more thoughtful and romantic side of Shinji Hosoe, as most of his music is purely electronic and adrenaline focused.

In the end, I think that Shinji Hosoe created an extremely accomplished soundtrack that works wonders in game. On a stand-alone context, the majority of the themes are also enjoyable, at least for those who don't mind dark and oppressive sounds, with only a few themes really failing to stand out. I definitely recommend this soundtrack for fans of the game. It should also appeal fans of Shinji Hosoe who want to hear something a tad different from him, while still adhering to his roots in some fashion.

Album was composed by Синдзи Хосоэ and was released on December 23, 2009. Soundtrack consists of 25 tracks tracks with duration over more than hour. Album was released by SuperSweep.