The Megami Tensei Gaiden Last Bible II Soundtrack is the second release of the Discovery series released by Supersweep. The aim of this Discovery series is to publish soundtracks for games that, for the most part, did not see soundtrack releases when they were released. Composed by Hiroyuki Yanada and Iwao Mitsunaga, the Last Bible II soundtrack features the music in its original format, from when the game was released on the Game Boy in 1993. How does the music compare to the first Last Bible soundtrack?

Unlike the opening theme from the predecessor, this "Opening" is much more calm and peaceful in nature. It doesn't really feature a strong melody and is more similar to some of the opening themes you might have heard on the Etrian Odyssey soundtracks. It's a decent theme, but it doesn't really get listeners in the mood, like the first game's opening theme. "Prologue" features the first signs of a heroic atmosphere. The melody isn't the strongest, but I do like it in conjunction with the militaristic percussion. It probably fits quite well with the game. In the end, it's a decent theme, but there are much better on the soundtrack.

As with any RPG, there are places to traverse and places to go. The "Temple" theme for this game is a vast improvement. It is dark and mysterious, ominous and foreboding, yet at the same time, it manages to carry with it a beautiful melody and I find the static notes to add to the ominous nature of the piece. The "Town" theme is even more jovial and upbeat than the first game's soundtrack. There is a beautiful melody and I really like the rhythm featured in the bass line accompaniment. It's such a relaxing theme and really gives off a sense of wandering about a peaceful countryside village without a care in the world. In a similar vein, I love how heroic "Field" is. There is such a strong sense of adventure in this theme and I think it really captures the exploration aspect of a world map theme quite well. In comparing it to the first game's field theme, I have to give this one the edge again.

It's time to get onto the battle themes, most people's favorite part of an RPG soundtrack. "Battle" just oozes retro battle themes. There is a fantastic bass line beat and a really strong melody. It isn't as progressive rock oriented as the first game's normal battle theme, but it is more cohesive and therefore a stronger offering, in my opinion. "Boss Battle" definitely picks up the slack for it with its style. There is an extremely strong melody, with some groovy harmonies, and a great bass line. It definitely surpasses its counterpart on the first soundtrack as well.

"Dungeon" is an exquisite theme that really harbors a beautiful sense of mystery. There is a subtle sense of tension, but the overall feeling that I get from this music is one of adventure and exploration. It's a solid theme and in comparison to the first game's dungeon theme, this one manages to surpass it. "Tower" is another dungeon related theme with an extremely mysterious atmosphere. Fortunately, the atmosphere is something that draws the listener in because I find the melody and overall progression of this theme to be quite boring. It's not a bad theme, per se, but some might find trouble listening to it due to its repetitive nature. Presumably the final dungeon theme, "Hell" gives off a very heroic sounding atmosphere coupled with an extremely strong melody. It features some fantastic chiptune keyboard glisses that really help elevate the melody to new heights and I really enjoy the rhythmic portions of the accompanying bass line.

The final battle theme, "Gaia," manages to surpass its counterpart, "Lucifer," from the first game. This is probably the best theme from both the first and second Last Bible soundtracks. It's the most progressive rock oriented theme on both soundtracks and it manages to score big points with its atmosphere. It, unlike "Lucifer," manages to carry with it a sense of mystery and uncertainty; however, it isn't afraid of intensity either. Some wonderful progressive rock keyboard solos are featured in the B section of the theme and really scream "Sakuraba" in terms of style. In fact, if there was a Last Bible series arrange album, I'd want Sakuraba arranging this theme! As with the first game, this soundtrack also closes with "Ending." Unlike the first game though, this one doesn't really give off a heroic vibe, however brief it was in the first game's ending theme. This one is definitely focused on a peaceful and calm atmosphere. The melody is strong and I really like the harmonies featured on this one as well. It's a very fitting way to end the soundtrack.

To finish, I think the Megami Tensei Gaiden Last Bible II Soundtrack is superior to the first soundtrack in the series. Although there is only about 26 minutes of music on this CD, the price is much more reflective of the content, rather than the full price of a CD. I think this is quite smart of SuperSweep as it allows older music to be published and heard for cheaper prices. It will be interesting to see what is planned for the Last Bible III and Another Bible soundtrack releases.

Second release of the Game Music Discovery series.
Album was composed by and was released on October 07, 2010. Soundtrack consists of tracks with duration over . Album was released by SuperSweep Co. Ltd.. 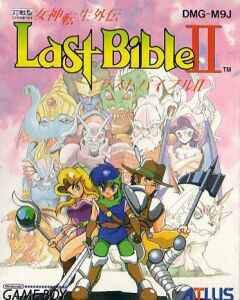