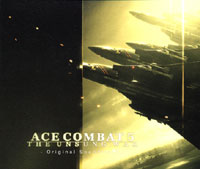 Ace Combat 5 The Unsung War Original Soundtrack is the biggest Ace Combat soundtrack to date and, in the opinion of many, also the best. After making a small but remarkable contribution to Ace Combat 04: Shattered Skies, Keiki Kobayashi was promoted as the main composer for Ace Combat 5: The Unsung War and chose to focus on maturing and refining the orchestral, often cinematic, sound for the series. However, he wasn't alone with Tetsukazu Nakanishi, Hiroshi Okubo, and Junichi Nakatsuru bringing their own musicality and often a rock influence to the score. The result is a diverse and vibrant work, but does it do enought to keep flying for four entire discs?

Keiki Kobayashi establishes Ace Combat 5: The Unsung War's soundtrack as his own right from the start. Although the menu themes are notorious for being relative filler tracks on the Ace Combat, "Briefing I" and "Hangar I" surprisingly set the action mood perfectly, with a distinctive combination of slapped bass riffs and colourful orchestration. While the early mission themes "Shorebirds" and "Open War" are straightforward given the tutorial style of the gameplay, they certainly get aerial with their gliding leads and punchy accompaniment. Things really start to intensify with the rasping brass work and obsessive string punctuation of "Naval Blockade"; with this theme and the arrangement of Ace Combat 04's "Blockade", it's clear funtime is over and war is officially upon the nation. However, only "Rendezvous" quite captures the excitement that Ace Combat 04's first mission theme did; it initially builds up rhythmical impetus with a trap set and edgy strings before exploding at the 0:28 mark with soaring violin solos and passionate orchestration. Unlike many Ace Combat themes of old, these tracks don't waste time repeating introductory passages, but just get straight to the heart of the action. Although the approach is arguably not as accessible as before, Kobayashi has certainly matured and refined the series' orchestral performance.

Though his contribution isn't as central as it was on Ace Combat 04, Tetsukazu Nakanishi is certainly responsible for some of most emotionally affecting works on the soundtrack. "Wardog", for instance, inspires great excitement by revisiting the charismatic trumpet writing and rocking drum kit rhythms of Shattered Skies. Meanwhile his enemy attack themes "Ballistic Missile", "Scinfaxi", "Demons of Razgriz", and "Hrimfaxi" create so much fear and suspense through their repetition of rhythmically agitated figures. It's fascinating how each theme is successively more intense, largely through their faster pacing and introduction of rock work, with "Hrimfaxi" being particularly hardcore. But perhaps his most defining contributions are for a particularly challenging two-part mission, "Desert Arrow" setting the scene with its bitting brass and earthy percussion, "Desert Lightning" electrifying the atmosphere with grungy guitar work. New contributor Junichi Nakatsuru produces perhaps the most accomplished guitar-orchestral hybrids of the set, however, with "Reprisal", "Blind Spot", "Grabacr", and "Four Horseman". In these themes, Nakatsuru mainly uses the electric guitar as a gritty supporting force, but he occasionally brings some lovely funk semi-acoustic guitar work to the frontline. His versatility extends beyond there and some contributions such as "Winter Storm" or "Mask" are more reminiscent of his orchestral Soul Calibur work.

This time around, Hiroshi Okubo's contribution is mainly focused on the Arcade sound version that dominates most of the fourth disc. Rocking themes like "Ripping Air", "Knock You Down", and "Catch the Lightning" are different from what one would expect from the series as there's not a trumpet or violin in sight; while the electric guitar work has an old-school sound reminiscent of the series' Arcade titles, the hard-edged drum work has a punk flavour. He also contributes more electronic tracks such as "Do or Die" and "Broken Species," which sound like aggressive takes on the Electrosphere format. Once again, though, Okubo makes a few contributions to the console score. The "White Bird" themes are two interrelated cues, but they make a much more positive impact on the soundtrack that Shattered Sky's "Breaking Arrows" since they're far apart in the album and nicely contrasted in sound. In fact, these tracks have some of the most dynamic timbres of the entire score and the electronica influence really helps. "Heartbreak One", on the other hand, is a orchestral cue that, following a tense repetitive introduction, gradually becomes overwhelmed by action. Okubo's vocal theme from Ace Combat 04, "Blue Skies", is also remixed for the album. It's a sublime arrangement that blends Stephanie Cooke's smoky voice with all-new trip-hop instrumentals.

The climax of the soundtrack is actually mainly centred on the third disc. "Wings of Unity", "Dead Ahead", and "Winter Storm" provide good preparation with Kobayashi and Nakatsuru's characteristically dense orchestration. However, "The Unsung War" is easily the centrepiece of the soundtrack. It's a seven minute war anthem featuring epic orchestration and some of most beautiful choral writing in video game history. How a piece can simultaneously so powerful yet tear jerking is beyond me. The other centrepieces of the score are "Razgriz" and "The Journey Home", which are two reflective that were exclusively orchestrated and performed by the Warsaw Philharmonic for the album release. The original versions are on the fourth disc and "The Journey Home" is quite a highlight as the main vocal theme of the soundtrack. While Mary-Elizabeth McGlynn gives an elegant performance, the classically-oriented radio version can be even more poignant given it has the sound of an old World War II performance. Aside the original tracks and the Arcade collection, the fourth disc mainly features Kobayashi's event themes for the game; while the best of the series, these are short and ambient tracks mainly intended for in-game underscoring rather than underscoring. However, "Epilogue" offers one of the most rich and personal orchestrations of the score. The album peculiarly ends with the licensed rock theme "Blurry" by Puddle of Mudd.

The Ace Combat 5: The Unsung War soundtrack is a stunning achievement for an action game. So much attention was put into ensuring each theme enhanced the action, tension, or excitement in the game while being wholesome on a stand-alone level. Most themes are melodically captivating, emotionally engaging, and intellectually fulfilling so they are bound to appeal to a wide audience. However, the soundtrack may be a more demanding collective listen since the mission themes can be samey in bulk with their serious manner and orchestral approaches. The rock, vocal, and Arcade tracks all help to break things up, as does the distinct musicality of the four contributors involved, although some will still find it hard to listen to all four discs at once. Regardless there are enough highlights to make this soundtrack a worthwhile purchase whether for those looking for just the raw epics or those after a more comprehensive listening experience.

The Journey Home (3-14)
Composed by: Keiki Kobayashi
Lyrics by: Katsuro Tajima
Performed by: The Warsaw Philharmonic

Tracks 14 & 15 from 3rd disc not unused for the game.
Album was composed by Хироси Окубо / Junichi Nakatsuru / Кэйки Кобаяси / Tetsukazu Nakanishi and was released on December 22, 2004. Soundtrack consists of tracks with duration over more than 4 hours. Album was released by King Records. 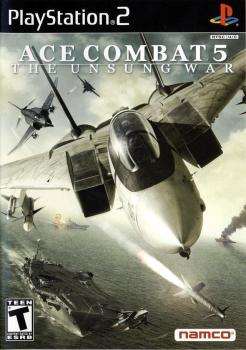