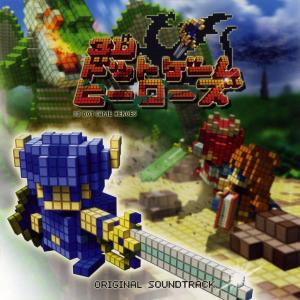 3D Dot Game Heroes is a unique addition to the increasingly large number of retro games out there — featuring 2D pixellated graphics in a 3D environment. Veteran game composer Shinji Hosoe and six of his associates were responsible for composing the score. In line with the hybridised graphics of the game, they offered a blend of modern and old-school sounds for the title. The resultant score is considerably different — and not necessarily superior to — counterparts from the Etrian Odyssey, Final Fantasy Gaiden, or Holy Invasion of Privacy Badman franchises. Let's fine out why...

The opening theme demonstrates the type of fusions to expect from the soundtrack. The composition is initially dedicated to recorder interplay based on the main theme for the game. The arrangement and instrumentation reflects the organic and humble nature of the 3D Dot World wonderfully. From the 1:08 mark, the composition gradually grows more intricate with gorgeous oboe leads, dense string backing, and driving percussion, leading to a triumphant revelation of the main theme at 2:00. A series of charming 8-bit bleeps punctuate the orchestral phrases to emphasise that this is no ordinary 3D game, but rather a retro tribute. The melody makes several appearances during the soundtrack, ranging from the brisk dazzling march in the "Main Theme" to the commanding brassy orchestration in "The Hero's Return". From both a compositional and technical perspective, these 'modern meets primitive' fusions are very well done and set precedent for the rest of the soundtrack.

Throughout the score, SuperSweep offer a wide range of compositions written in RPG tradition. Town themes such as "Lejac Village" and "Corneria, the Waterside Village" and are surprisingly expressive and beautiful, even when built entirely with old-school samples. Dungeon themes like "Temple of the Plains" and "Temple of the Volcano", among others, blend horrifying orchestral features influenced by Folklore with charming dashes of old-school samples. The desert, ocean, and forest dungeons, on the other hand, bring fascinating cultural and ambient influences into the increasingly diverse score. At the climax, the team take a neo-Gothic approach with organ-fuelled compositions like "Demon Valley" and "Tower of Darkness" before rounding off the experience with a blistering rock theme in "Overlord Onyx". Whatever the type of theme, SuperSweep succeed in offering fusions of contemporary and traditional sounds that satisfy both in and out of context.

It's clear that SuperSweep were actually influenced by numerous other old-school scores when creating this soundtrack. The references are sufficient for players to cry out 'Wow, that sounds a bit like Mega Man' or 'Could that be a bit of Dragon Saber I just heard?', but never so explicit to be classed as plagiarism. After all, SuperSweep captures the tone of the compositions using a number of conserved features, but they always offer original melodies and individualistic touches. The main theme itself, for instance, clearly was inspired by The Legend of Zelda's overworld theme with its heroic orchestration and rousing chord progressions. "The Legendary Hero's Theme" and variations such as "The Hero's Tomb" would fit in a classic Final Fantasy score with their charismatic melodies and modest orchestrations. "Dash Race" meanwhile sounds like an upbeat rocking action theme from a Falcom title, while "Travel Preparations" provides a nod to Dragon Quest's "Only Lonely Boy" with its pizzicato string focus.

The soundtrack nevertheless has several limitations. The score is arguably less accomplished synthetically than its retro counterparts like Etrian Odyssey. Indeed, SuperSweep don't attempt to glamourise old-school synth and instead incorporate samples that sound like they've just come from the NES. This results in a range of often piercing compositions, such as "The Hall of Aube" and "Main Theme", while yet others such as "Combat" and "Block Destruction" sound choppy and feeble. When combined with the often limited orchestral synthesis, the resulting compositions can be potentially unaesthetic, but nevertheless authentic. Furthermore, the soundtrack suffers from numerous short and underdeveloped tracks. Though some were cut short for in-game tracks, others such as the classically-oriented "King Medal's Theme", gothic "The Dark Priest Fuel", or unused "Boss Fight 2" seem to really beg for more. Even the three final themes, "Staff Roll", "Title Theme", and "Editing Theme", are tragically unmemorable and unsubstantial.

The 3D Dot Game Heroes Original Soundtrack has its flaws, but it is largely an accomplished and satisfying production for those who can accustom to the synth. It's fascinating how Shinji Hosoe's team managed to combine both modern and primitive sounds together in often weird and wonderful ways to portray different game contexts. There are also plenty of emotional moments and memorable melodies to be found within the score. Whether heard within the game or through the album release, it's well worth hearing what SuperSweep offer on 3D Dot Game Heroes. 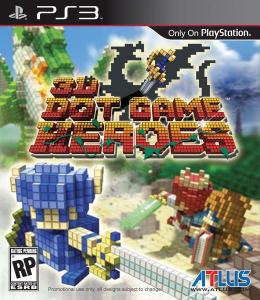