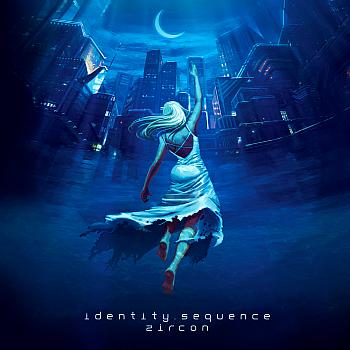 Coming off recent successes such as Super Street Fighter II Turbo HD Remix and SoulCalibur V, composer and remixer Andrew Aversa (aka zircon) commissioned work on an original album funded purely through Kickstarter. Zircon has described Identity Sequence as "an electro-organic album of evolved dance music inspired by seminal cyberpunk works." More than five years in the making, does this album live up to all the hype it has generated?

Identity Sequence combines the use of many styles of music ranging from ambient, techno, rock, orchestral, dubstep, and more to create a fresh and varied aural experience. Zicron has created much more than a soundtrack. He has created a living, breathing musical universe.

Two people exist alone, isolated in an era where everything and everyone is networked and digitally connected. The shackles of physical forms have been almost entirely abandoned. Yet despite this wondrous, highly-technological world, they long for a different existence and the warmth of human connection. Through an abstract, interpretive narrative, this album chronicles a journey of self-discovery, development, and philosophy as two fates intertwine. - Andrew Aversa

The appropriately titled "Genesis" begins this album with ambient synth and a light buildup of the percussion. This brief piece perfectly transitions into the next track, "Arms Open Wide." The haunting vocal performance by Jillian Aversa is accompanied by swirling electronic blips and percussion. "Million Years" utilizes the piano for its introduction melody, and the perfectly mixed synth for its backing. Chris Gordon's strong performance with fitting lyrics serves as the backbone for this cyberpunk-inspired world.

"Neurobazzar" changes into dubstep style with a mixture of Middle Eastern flavored string instruments and percussion, piano bar melodies, and deep techno synth. "Fabrication" is somewhat difficult to describe, combining orchestral and electronica styles of music together. Jillian Aversa returns with another mysterious performance towards the latter part of this track.

We now move on to the main theme of this album with "Identity Sequence." Zircon's description of "organic electronic dance music" would be most accurate. With dubstep and electronica as its bread and butter, the overall piece is one of the album's best highlights. If I could pick out my favorite track out of the rest, it would be this one. "Unity" is another highlight of mine, featuring masterful violin work courtesy of performer of Jeff Ball. The wonderful solo isn't the only thing that this piece has going for it, as I absolutely enjoyed the backing techno synth as well.

"Memory" features an odd remixing of Jillian Aversa's vocal lyrics, in combination with pulsing techno synth. With "Colossus", we hear a hint of orchestral flair mixed in with jamming dubstep and electronic synth. I really enjoyed the overall rhythm with this one. "The Expanse" continues in the use of electronica. This track also features great use of the Philadelphia Men's Choir and alto soloist Dan O'Neil.

"System" had me imagining the high-tech worlds of cyberspace. The orchestra provides the bulk of the melody, while the synth constantly backs them. The electric guitar solo towards the end of the piece is an excellent touch as well. "Just Hold On" follows a similar formula established by previous vocal tracks. Wonderful lyrics combined with a mixture of ambient synth and electronica. That's not to say that there's no variety, though. With the sheer differences in compositional style and use of various synths, there is very little similarity between tracks.

The final two tracks "No Regret" and "The End" provide suitable closure for this stunning album. The former is a mellow vocal theme by Chris Gordon that's both bittersweet and uplifting at the same time. The latter reflects upon the various styles found throughout the album and combines them together to remind the listener of what they have experienced. A fitting and nostalgic track that caps off this splendidly composed album.

I have nothing but high praise for Identity Sequence. From the high production values of the synth, to the splendidly composed melodies, to variety in musical styles, the strong vocal performances, and excellent mixing; every part of this album shines. More than just standard electronica fare, it's an experience that must be listened to with a great stereo system or headphones. With all the praise I've given, it earns my highest recommendation.

Album was composed by Эндрю Аверса / Джиллиан Аверса and was released on December 12, 2012. Soundtrack consists of 14 tracks tracks with duration over more than hour. Album was released by Zircon Studios.