The Arc the Lad Original Game Soundtrack features two different components. It includes the original full-orchestral performances of the opening and ending themes featured in the game. In addition, it includes jazz fusion arrangements of the character theme tunes from the game. More of an arranged album than an original score, those looking for the remaining original tracks should look for the Arc the Lad I & II Soundtrack Complete instead. Nevertheless, there are some valuable exclusives on this album...

The soundtrack opens with the fully-orchestrated opening theme for Arc the Lad. Unparalleled at the time for its production values, it featured orchestrations by Keiichi Oku and a performance by the Royal Philharmonic Orchestra. Following an avant-garde cinematic introduction, the composition moves into a full rendition of the "Theme of Arc the Lad". A very typical march written in the spirit of television theme tunes, the brass melody here is a good fit for the bold and youthful main character Arc and is fairly memorable despite its derivative qualities. The rendition of the theme on the Arc the Lad Original Game Soundtrack is certainly the most elaborate and impressive, so comes with a high recommendation.

The central portion of the album is dedicated to arrangements of the various character themes from the game by former T-Square member Hirotaka Izumi. These arrangements greatly elaborate on the jazz fusion stylings of the original compositions; whereas the original pieces usually looped before the 30 second mark, these are fully-fleshed tracks performed with full bands. The theme for "Arc" is a particular transformation in this extended rendition, with Masahiro Andoh's guitar performance bringing out the lively and youthful quality of the original melodies and extending them through several solos. It somehow manages to transform a basic theme tune into a half-respectable jazz fusion piece. However, it is more impressive given the nature of the original material than in its own right.

Indeed, the jazz fusion music featured here is definitely straightforward and even less inspired than most of T-Square's work. Most tracks are solely focusing on conveying superficial emotions rather than anything more deep or dramatic. "Kukuru" and "Tosh" convey nothing but happiness using upbeat rhythm guitar riffs and showy guitar and keyboard solos; the harmonies are completely functional, the solos are little more than fluff, and even the melodies are rather limited. Others focus on offering relaxing soundscapes, namely "Poco" with its acoustic guitar and "Chongora" with its soprano saxophone, and are even more simplistic than most smooth jazz out there. Some might find the soundscapes outwardly uplifting, though don't expect anything of any technical or emotional depth, as it simply isn't present.

The album closes with a 13 minute ending suite once again performed by the Royal Philharmonic Orchestra. Perhaps the crowning achievement of the entire soundtrack, the suite offers everything from victorious brassy anthems, to soft oboe-based contemplations, to rich scenic tuttis, before reflecting with the final march-like fade-out that the Arc the Lad experience isn't over. There is nothing ground-breaking in the orchestration and performance here, which all adhere to basic cinematic foundations, and once again the melodies are a little underdeveloped. However, it is impressive that a composition of this magnitude in terms of both richness and length was featured in a video game from 1995.

The contents of the Arc the Lad Original Game Soundtrack are certainly of contrasting value. The opening and ending orchestrations, while conventional, show considerable artistry and depth. The same cannot be said for the jazz fusion arrangements, which develop upon the original material, but fail to offer anything other than superficial stylings and one-dimensional emotions. Hardcore fans wishing to hear the exclusive cinematic tracks may want to pick up this album, but it probably isn't worth searching down otherwise.

Contains arranged music from the first Arc the Lad game. Also contains the Ending Theme of Arc the Lad not included in "Arc the Lad Sound Track Complete".

All Music Composed by Masahiro Andoh
Arranged by: Keiichi Oku (1, 9 ~ 11), Hirotaka Izumi (2 ~ 8)
Album was composed by Масахиро Андо and was released on February 07, 2001. Soundtrack consists of 11 tracks tracks with duration over about 50 minutes. Album was released by Village Records. 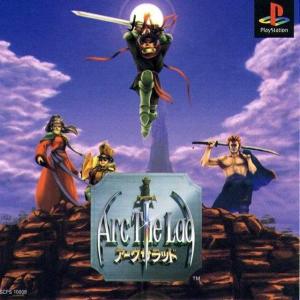