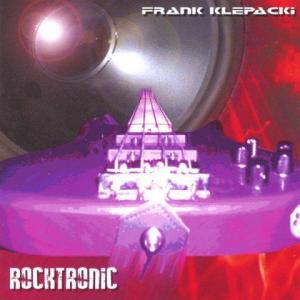 Two years after his solid debut album Morphscape, Klepacki returned in 2004 with Rocktronic. Looking at Klepacki's game credits, it looks as if Rocktronic received the lion's share of his musical attention in those couple of years since 2002. After Command & Conquer: Renegade, Klepacki only returned to video game scores with 2004 and 2005's relatively low-key titles UFC Sudden Impact and MX World Tour. Like all other solo albums by Klepacki, Rocktronic is available for purchase from his website.

At first, 'rocktronic' doesn't seem to be more than a pretty generic way to sum up Klepacki's style of music made famous particularly through his Command & Conquer soundtracks. Listening to Rocktronic, it becomes clear that its name correctly differentiates it from its predecessor Morphscape. Living up to its title, Rocktronic puts the spotlight quite squarely on Klepacki's blend of hard rock and electronic influences, while mostly excluding the other genres Klepacki has dabbled in previously. This gives Rocktronic a focus that was lacking from Morphscape, which – due to its gestation – felt like a collection of various ideas that held together surprisingly well. This difference between the two albums also means though that Rocktronic is less colourful than Morphscape.

Does Rocktronic's narrower genre focus mean that the album is a more monotonous listening experience? Fortunately, not at all. Positioning Rocktronic closer to his Command & Conquer sound than Morphscape was already, Klepacki regains the militaristic aggression that made his industrial rock/techno for the C& C games so powerful. Right from the start, “Decible” announces that Klepacki is out to rock hard with Rocktronic, as the track mixes heavy bass lines with catchy funk rhythms and industrial beats to create one of Klepacki's trademark industrofunk cues that just keeps rolling and grooving with it punchy rhythms. The melody leads here come from the synths and nicely cap off the cue, which only gains in intensity when the instrumentation is stripped down and the pounding double bass drums take over. As is usually the case, Klepacki's cues flow naturally and never does a track on Rocktronic feel like it's dragging on. Following straight after “Decible”, “Rocktronic”'s lumbering drum rhythms and crunchy guitar riffage are clearly inspired by Klepacki's classic “Hell March”, without drawing too much on that Red Alert composition to feel like a copycat. With all funk and hip-hop influences now gone and full of energy and aggression, “Rocktronic” brings together electronic and hard rock styles with ease, emerging as one of Klepacki's best industrial rock cues.

Not only is Rocktronic carried through its economic running time of 40 minutes by the wave of adrenaline that it's riding on, but also by the amount of variety that Klepacki manages to wring out of his 'rocktronic' genre formula. “Take Me” for example focuses almost exclusively on hard rock, segueing after a twitchy synth/bass/guitar intro into a bluesy 70s hard rock groove à la Atomic Rooster, replete with memorable riffs and rock solid work from the rhythm section. More traditional than most of Klepacki's rock tracks, around the midway-mark “Take Me” still returns the scratching sound effects and humongous bass guitar sound that opened the track, making for a surprisingly effective bridge into the cue's intense finale. “Bring the Fight” is another strong, tight rocker that doesn't reinvent the wheel, but actually doesn't need to in order to finish the album on a thoroughly satisfying note. On the other end of the spectrum lies “It Has Begun”, the album's most clubby track with its dance beats, still maintaining the album's surge of energy and stylistic cohesion. However, it also features the album's only questionable moments – some involuntarily cheesy euro disco synth leads.

“Escape” returns the spaced out 80s synths heard on Morphscape's “Mode One” and places them on top of driving live drum rhythms that keep the music on track and in tune with the rest of the album, while electric guitars are left out of the equation altogether. The resulting change of sound is another example of Rocktronic's ability to keep rocking while exploring different musical textures and colours. “In Yo Face” features a similar mix of instruments, but its goose-stepping rhythms place it into the industrial rock genre, once more drawing upon Klepacki's Command & Conquer body of work and delivering a track that is just as strong as its predecessors. Where Rocktronic innovates is on the penultimate album track “Machines Collide”, which first introduces Rocktronic's harshest, most single-minded industrial rock rhythms, as well as purposefully grating electronic noises – and then adds choral layers to the musical assault, giving the music more scope and power in an unexpected way. While Klepacki would attempt the same mix of disparate elements later again on Universe at War: Earth Assault's “Credits UAW Remix Suite”, “Machines Collide” sets itself apart through the way Klepacki uses the choir here. While “Credits UAW Remix Suite”'s choir reinforces that track's irresistible rhythmic drive, the choral layers on “Machines Collide” float above the grinding rhythms underneath – a tension that helps to make “Machines Collide” the album's crushingly effective stand out track.

Amongst all the heavy rockers on Rocktronic, “The Streets” and “In the Tunnel” fulfil the purpose of slowing the album's second half down just enough before “Machines Collide” can make its thunderous entrance and look even more imposing. Both tracks do a great job at conjuring a pervading sense of atmosphere perfectly suited to the locations they describe. “The Streets” has a distinct touch of gritty, futuristic urban cool that is reminiscent of many of the cyberpunk-themed games released in the early- and mid-90s. A lot lighter than the album's rocking and pounding other tracks, “The Streets” is still varied, densely layered and builds up enough tension with its stealthy synth groove to keep listeners interested, while some uplifting synth motifs ease the clandestine atmosphere. “In the Tunnel” is similar in its more restrained mood and deploys the same pattern of tension and release as “The Streets”, only this time through a relieving piano lead. While “In the Tunnel” is the track on Rocktronic that's easiest described as a mood setter, it still has more than enough substance to intrigue.

Starting out smashingly with “Decible” and going from strength to strength, Rocktronic bests Klepacki's previous solo outing and sits right next to his best work for the Command & Conquer franchise, with which it shares many stylistic similarities. Klepacki focuses on different combinations of rock and electronic elements – the album's title is dead on –, keeping the album more focused than the sprawling Morphscape. Within this framework, Rocktronic manages to still maintain the eclecticism so typical of Klepacki's work, ranging from straight out hard rockers to industrial funk and noise vs. choir showdowns. Driven by unbridled energy, Rocktronic – even less so than Morphscape – delivers anything that hasn't already been heard on Klepacki's Command & Conquer scores, with “Rocktronic” sounding more than a little like “Hell March”. However, when a trademark style is pulled off as well as it is here, and is bolstered by consistently strong songwriting, there's no reason to complain.

Album was composed by Фрэнк Клепаки and was released on 2004. Soundtrack consists of 10 tracks tracks with duration over about 45 minutes. Album was released by Frank Klepacki.