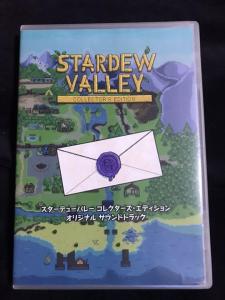 Enclosed with the Japanese Collector's Edition.

Notes from Parent Album:
Although the marketing stated that the soundtrack would be a digital download code, the Collector's Edition version of the game actually includes a physical soundtrack CD, along with the game on blu-ray disc, a fold out map, and a mini guidebook by Kari Fry.

In the Unites States, the soundtrack comes in a paper case for the PlayStation 4, and a loose disc stacked on top of the game disc for Xbox One.
In non US regions the soundtrack is presented in its own cardboard slipcase.
Album was composed by ConcernedApe and was released on January 31, 2019. Soundtrack consists of 33 tracks tracks with duration over . Album was released by AMUZIO, Oizumi Amuzio Inc..